The Hudson’s Bay Company, founded in London in 1670 to develop the fur trade of British North America, established British claims to northern and western Canada (see Canada—immigration survey and policy overview) and opened western lands to settlement. The original charter granted rights to “the Company of Adventurers from England trading into the Hudson’s bay.”
The company was founded by English noblemen and merchants with the help of two disgruntled French fur traders, Médard Chouart, sieur des Groseilliers, and Pierre Esprit Radisson, who agreed to work for Charles II (r. 1660–85). The original charter provided exclusive trading rights for all lands drained by rivers flowing into Hudson Bay, an area of almost 1.5 million square miles. Company traders probed deep into the Canadian interior, trading guns, knives, and other manufactured objects for furs, especially beaver pelts. Although not organized for settlement, the company required hundreds of employees, most of whom were brought from Ireland and Scotland as indentured servants (see indentured servitude). They frequently married native women, and their families formed a distinct ethnic group, the Métis, by 1800. Conflict with the French, who claimed the same lands, was endemic. A series of colonial wars, culminating in the Seven Years’ War (1756–1763), led to complete British control of Canada and a free hand for the Hudson’s Bay Company.With the demise of the French threat, in 1779 the North West Company was formed in Montreal to challenge the Hudson’s Bay Company’s dominance of the fur trade. In order to compete, each company extended its network of fortifications, trading posts, Indian contacts, and transportation routes, thus opening isolated western settlements to further European contact. After open warfare between the two companies in the wake of the establishment of the Red River colony (1812), the rivals eventually merged and were reorganized (1821), retaining the Hudson’s Bay Company name and extending the original charter to include the Pacific Northwest and the Arctic. 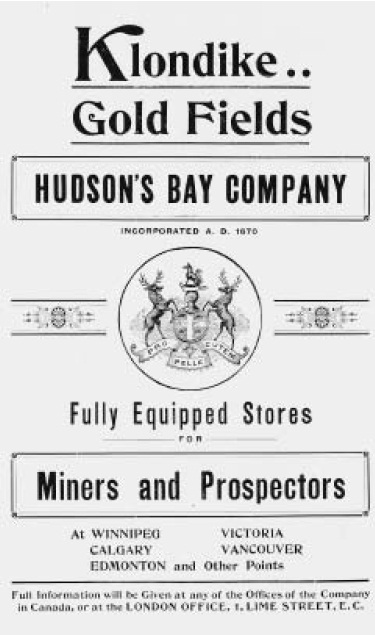 An 1890s advertisement for the Hudson’s Bay Company encourages Klondike prospectors to purchase the company’s stores. After the decline of the fur trade in the 1870s, the company diversified its economic interests and moved extensively into commercial marketing. (Library of Congress, Prints & Photographs Division)
As western Canada enticed larger numbers of settlers, the fur trade declined as a major commercial enterprise, and the United States surfaced as a potential threat, company administration of the huge area became untenable. In 1869, the British government negotiated a settlement with the Hudson’s Bay Company that transferred the company’s lands to the newly formed Dominion of Canada (1867). In return, the company received £300,000, a grant of some 45,000 acres around its 120 trading posts, and continued trading privileges on the western plains. With the fur trade almost dead by 1875, the company diversified its interests, shifting greater resources into real estate and retail marketing operations and maintaining its position as one of the largest private companies in Canada. In the wake of recession, in 1986 and 1987 the company sold its fur-auction houses and petroleum interests in order to raise cash and intensify the retailing and real estate sectors that have kept the company solvent in the years since World War II.