American Chinatowns are viewed by some as ethnic ghettos and places of exploitation by an internal Chinese American business elite and by society as a whole.

Chinese laundries developed as a major occupation for the first wave of Chinese immigrants who came to the United States during the mid-nineteenth century. Laundries opened throughout the country and became uniquely identified with this ethnic group.

Definition: Usually urban areas, within which culturally distinct minority communities maintain ways of life largely separate from those of the generally larger communities that surround them

Significance: Ethnic enclaves have long played, and continue to play, significant and normally peaceful roles in bridging the periods between the arrivals of new and culturally different immigrant groups and their assimilation into United States society. At the same time, they have also, to some degree, prolonged assimilation periods, and their presence has sometimes been perceived as an inflammatory refusal on the immigrants’ part to join the American nation. 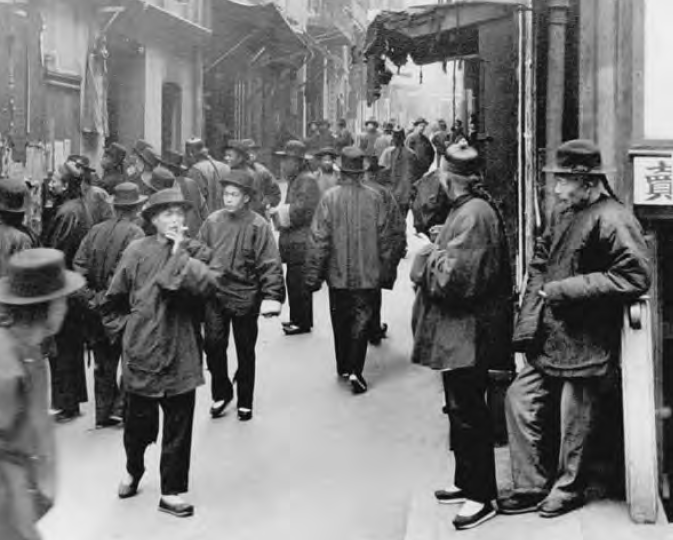 Unemployed Chinese men in San Francisco’s Chinatown district around the year 1900, when the city had the largest concentration of Chinese immigrants in North America. (Library of Congress)

One of the most enduring self-images of United States society is that of the melting pot—that is, the notion that the United States is a country into which immigrants from multiple points of origin have come, intermingled, intermarried, and produced new citizens endowed with a rich, intermixed cultural heritage. It is an image that has served the country well, providing, as it did, the philosophical foundations for the widespread acceptance of the culturally pluralistic, or multicultural, nation that emerged in the United States during the second half of the twentieth century.

The melting pot image also rests on a firm empirical base, albeit mostly on the frontier, where immigrant groups often spread out, where marriageable partners from within the same "Old World” communities were often hard to find, and where the harshness and dangers of life necessitated collaboration across ethnic and cultural lines. In the coastal cities where the immigrants arrived, however, and in the urban areas across the country where ethnic groups settled in large numbers, a different pattern prevailed. In big cities, neighborhoods with revealing names such as "Little Italy,” "Germantown,” and "Chinatown” often sprang up. These communities led day-to-day internal lives quite apart from those of the broader, usually English-speaking communities around them and the other ethnic enclaves that sometimes abutted them. Comforting in origin and resilient over time, significant portions of many of these early ethnic enclaves have survived into the twenty-first century across the United States. They have been joined by new ethnic enclaves being created, especially in suburbs, by more recently arrived immigrants from Asia and Latin America.

The factors that produced, and continue to lead to the emergence of these ethnic neighborhoods are varied and, in some instances, idiosyncratic. One pervasive element, however, has doubtless been the normal human desire to remain within one’s comfort zone and associated reluctance to move precipitously outside one’s cultural community in one’s new homeland. It is one of the standard reactions to minority status across time and space, and where enough members of a person’s point of origin to sustain the development of an ethnic neighborhood are living, ethnic enclaves have arisen among immigrant countries throughout the world.

Other factors also work to foster and sustain such enclaves. None is more common or significant than the two-sided nature of the culture shock that groups from differing ethnic backgrounds experience when they first encounter one another. For newcomers, immersion in a foreign culture, adjusting to a different economic setting—such as urban rather than rural—and perhaps encountering a different dominant language and a different religion can all combine to produce a strong desire to recreate a more familiar environment. The recreation of the remembered homeland by incoming immigrants, often from a single village or province, provides a secure environment to which to return after a daily bath in the outside culture. Such a setting can even serve as a cocoon within which a day-to-day life not too distant from that of the land of origin can be preserved, in which a familiar religion can be practiced, in which an immigrant entrepreneur class can develop, and in which the process of assimilating to the new world can be eased.

Meanwhile, encounters with the newly arrived can also result in a culture shock to the host culture, whose members may resent the immigrants’ "otherness” and ways of life and even fear that the new immigrants’ willingness to accept wages below prevailing market rates may threaten their own economic status. In extreme cases, new organizations may emerge to oppose the immigrants’ presence and even visit violence upon them to "keep them in their place.” American history holds no shortage of such organizations. Outstanding examples included the post-CivilWar Know-Nothing Party and the Ku Klux Klan, whose bigotry extended far beyond harassing freed slaves to target Jews and Roman Catholics as well. However, even nonviolent forms of rejection, such as restrictive housing covenants designed to keep unwanted ethnic and racial groups out of existing neighborhoods, also played a role in the creation and endurance of ethnic enclaves in twentieth century America. In such environments, ethnic neighborhoods became more than cultural and economic oases. They also became both sanctuaries from violence and secure homelands within a hostile world.

As immigrants moved inland from their coastal points of arrival, ethnic enclaves became common in cities throughout the country. Their presence remained strong during the early twenty-first century, though often in less heavily populated centers, and have sometimes taken the forms of small restaurant or tourist districts, rather than the miniworlds of cultural distinctiveness they constituted a century earlier. At least a score of United States cities, and another half-dozen in Canada and Mexico, contain Chinatowns. Little Indias exist in at least a dozen U.S. cities, Germantowns and Little Italies are almost ubiquitous parts of urban America, and even Greektowns can be found in North American cities as diverse and spread out as Baltimore, Chicago, Denver, Toronto, Omaha, and Vancouver.

Although culturally distinct, these older ethnic enclaves have nonetheless exhibited significant structural similarities. For example, religion has played a strong role in the founding of most of these enclaves and a leading role in the origins of some. For Roman Catholics, Jews, and immigrants from Asia and the Middle East who have found themselves in predominantly Protestant environments upon arrival, neighborhood churches, synagogues, and temples often became the social as well as religious centers of enclaves.

At least equally important, the ethnic enclaves were sustained by economic cores. Their businesses were generally owned and operated by members of the community, with many of them catering to their communities’ particular tastes and needs, while providing jobs for their members. Indeed, inside the enclaves, discrimination often favored community members over outsiders in the sense that social norms sheltered the housing, investment, and labor markets of the enclaves from outsider competition. Consequently, ethnic enclaves often provided their members with economically secure footings from which to venture into the broader society. At the same time, to the extent that they became restaurant zones or otherwise attracted outsiders, ethnic enclaves fostered interaction between their members and others within secure environments. In so doing, they encouraged their own members to learn English sooner rather than later, thus facilitating the process of interethnic interaction within the linguistic polyglots that were late nineteenth century U.S. cities and, ultimately, the assimilation of the ethnic groups into the wider society.

The history of the United States as an immigrant nation continues to unfold—sometimes over the opposition of such conservative groups as those fearing the "Re-Mexicanization” of the American Southwest—as asylum seekers, refugees, and both documented and undocumented immigrants continue to enter the country. Meanwhile, the process of forming new ethnic enclaves in receiving cities within the United States and Canada has continued.

The arrival of new immigrants is rapidly transforming the ethnic character of the American nation. Latinos have already replaced African Americans as the country’s largest ethnic or racial minority, and the arrival of large numbers of Koreans, Vietnamese, and others fromSoutheast Asia in the last third of the twentieth century recast the Asian American profile, which previously had been dominated by Chinese and Japanese immigrants. Like their predecessors, members of these new groups have established their own ethnic neighborhoods, albeit increasingly in suburban areas, rather than the inner city enclaves created by the immigrants arriving from Europe and Asia during the nineteenth century. Indeed, for all the talk of cities like Los Angeles taking on a "third world” personality because of their large numbers of immigrants from non-European areas, their ethnic enclaves are often being established in areas once far removed from the inner-city ethnic neighborhoods of the nineteenth and early twentieth century.

In Washington, D.C.’s commuter landscape in Virginia, for example, places such Manassas Park are growing quickly into areas in which ethnic minorities constitute local majorities. Moreover, as was true in the past, stores within these enclaves have emerged to offer goods not readily available in the wider, outside community. Examples include shops selling news publications, video discs, and compact music discs in foreign languages. In many of these communities, particularly those of Hispanic residents, foreign-language radio and television stations provide stories in greater detail on life and politics in the country of origin than what is available in the broader community’s media outlets.

Bohon, Stephanie. Latinos in Ethnic Enclaves: Immigrant Workers and the Competition for Jobs. New York: Garland, 2001. Focusing on the ethnic enclaves of Latinos in four American cities, this study is valuable both as a snapshot of major recent immigrant communities and as an examination of the competition among members of various Latino communities rooted in the struggle for jobs.

Jendian, Matthew A. Becoming American, Remaining Ethnic: The Case of Armenian Americans in Central California. New York: LFB Scholarly Publishing, 2008. Focuses on the oldest Armenian community in the western United States; however, the true value of this immensely interesting book lies in its treatment of the multidimensional nature of assimilation in American society.

Keyes, Charles F. "The Dialectics of Ethnic Change.” In Ethnic Change, edited by Charles F. Keyes. Seattle: University of Washington Press, 1981. Authoritative source on the definition of ethnic enclaves, and a useful introduction to the topic offered in the form of an anthology on ethnic groups coping with their minority status.

Logan, John R. The New Ethnic Enclaves in America’s Suburbs. Albany, N.Y.: Lewis Mumford Center for Comparative Urban and Regional Research, 2001. Census-based and statistics-laden study of the changing patterns of residency in the United States between 1990 and 2000. Also available online.

Ryon, Roderick N. Northwest Baltimore and Its Neighborhoods, 1870-1970: Before "Smart Growth.” Baltimore: University of Baltimore and the City of Baltimore, 2000. Exceptionally interesting account of ethnic enclaves and their gradual transformation in Baltimore, Maryland, a major port city during the nineteenth century.