According to the 2000 U.S. census, 1,899,599 Americans claimed Asian Indian descent. Although most were Hindus and Muslims, almost 150,000 were Christians from southern India. Asian Indians were spread throughout the country, though around 70 percent lived in New York, Pennsylvania, New Jersey, Texas, Michigan, Illinois, Ohio, and California. As a group, Indians were among elite immigrants, generally well educated and often arriving with capital to invest in business or industry. At the turn of the 21st century, approximately 4 percent of American medical doctors were foreign-born Indians or of Indian descent. According to the 2001 Canadian census, approximately 100,000 Canadians claimed either South Asian ancestry or descent from an Indian ethnic group, while 713,330 identified themselves as East Indian. Indians are widely spread throughout Canada. Early settlement centered in British Columbia; after 1960, Toronto was the favored destination.
Exact numbers of immigrants are difficult to ascertain, as the term Indian applies to more than a dozen ethnic groups and has been used to refer to two distinct political entities. From the late 18th century until 1947, India comprised all the diverse religious and ethnic groups governed directly or indirectly as part of British imperial territory between Afghanistan and Burma (present-day Myanmar). This included large and distinct communities of Pakistanis, Punjabis, Bengalis (Bangladeshis), Sinhalese, and Tamils, among others. Although the term Hindu was frequently used into the 1960s in reference to migrants from the whole of British India, it was in many cases inaccurate, as Pakistanis were most often Muslims, Punjabis either Muslims or Sikhs, and Bengalis either Hindus or Muslims. The “Indian” peoples spoke a variety of languages, including Gujurati, Urdu, Hindi, Tamil, Punjabi, Bengali, and Telegu. When Britain withdrew from its Indian empire in 1947, predominantly Muslim territories of the Sind and Punjab in the west and eastern Bengal and Assam, a thousand miles to the east, were collectively granted independence as the new state of Pakistan. The predominantly Hindu island of Ceylon (Sri Lanka) was granted independence in the following year. What remained became the modern country of India, the seventh-largest country in the world by landmass, with 1,146,600 square miles, and second only to China in population, with just over 1 billion people. It incorporates climatic and vegetative patterns ranging from the high Himalayan Mountains in the north to the deserts of Rajasthan in the northwest to the rain forests of Assam in the northeast. With mixed ethnic and religious populations, a peaceful division of land proved impossible, and more than 1 million people died in communal violence surrounding the partition. About 80 percent of Indians are Hindus, and 14 percent Muslims. Ethnic and religious tensions in India and along the border with Pakistan remain high, providing a powerful impetus for some Indians to emigrate.
There is evidence of Indian sailors and adventurers settling in the United States as early as the 1790s, but they did not begin to migrate to North America in significant numbers until around the turn of the 20th century. They then generally came as part of two groups: poor laborers or elites. With the abolition of slavery in the British Empire in 1834, Indian labor became an important commodity. It has been estimated that between 1834 and 1934, some 30 million Indians indentured themselves for terms of labor in eastern and southern Africa, the Caribbean, Southeast Asia and western Europe. Between 1904 and 1911, 6,100 Indians immigrated to the United States, living almost exclusively on the West Coast. Many were Punjabi Sikhs who had first immigrated to western Canada but found work in lumber mills and on railway gangs in California and the Pacific Northwest. The largest concentrations were in the San Joaquin, Sacramento, and Imperial Valleys of California. Provisions of the racially restrictive Alien Land Act (1913), Immigration Act (1917) and National Origins and Quota Act (1924), along with the 1923 Supreme Court ruling that Indians were ineligible for naturalized citizenship, made it impossible for them to assimilate, and economic depression made it unattractive for further immigrants to come. As a result, Sikhs and Muslims often took Mexican wives, creating a significant “Mexidu” culture that consisted of more than 300 families. More than 6,000 Indians were either deported or chose to leave the United States so that by 1940, fewer than 2,500 “Hindus” were living the country. Although illegal immigration through Mexico may have added several thousand more, the total number of residents was never more than a few thousand. Among the elite groups, teachers (swamis), students, and merchants were most common, representing the well educated from many ethnic groups, including Bengalis. Students who came to the United States were frequently involved with the Indian nationalist movement, but their numbers were never large. The renewal of immigration of Indians under provisions of the Immigration and Nationality Act (1965) led to increased numbers but was of a wholly different character than the earlier migration. Most were not Sikhs, few settled in California or the West, and almost none were agriculturalists. The majority of recent Indian immigrants were well-trained professionals and entrepreneurs, who were often overqualified for the jobs they held. Between 1992 and 2002, about 480,000 Indians immigrated to the United States. 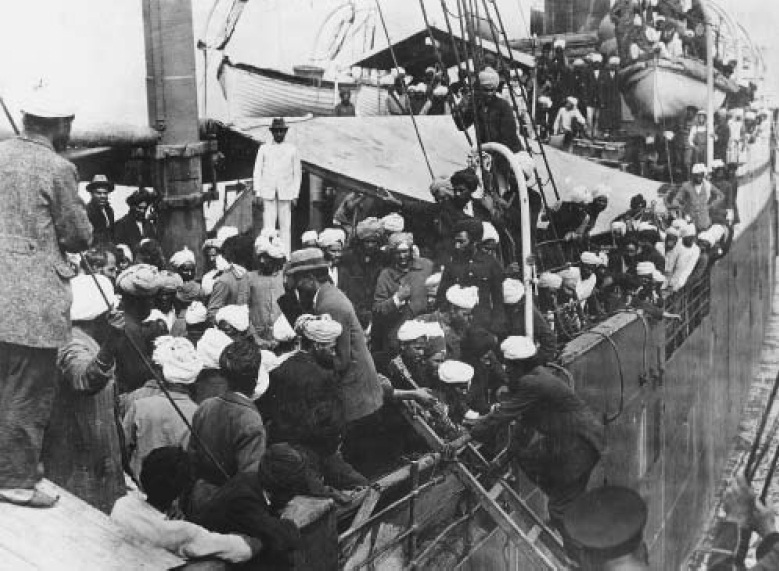 Indian immigrants on board the Komogata Maru in English Bay,Vancouver, British Columbia, 1914. Indian businessman Gurdit Singh sponsored the voyage for 376 East Indian workers sailing from Shanghai, openly challenging restrictive Canadian legislation. After a two-month court battle, the Komogata Maru was forced to leave Canadian waters. (National Archives of Canada)
Many Sikhs sought opportunities afforded them as subjects of a British Empire that stretched across the world. They often served as soldiers or employees of steamship companies, and many eventually settled in Canada. The first significant wave of Indian immigrants came between 1903 and 1918, when more than 5,000, mainly Sikhs, arrived. In the early 20th century, this led to fairly homogenous Indian communities in western Canada, where most of the men had originally settled before bringing over their families. Denied the right to participate in the national political process, Indians focused on local community organization and loudly protested their denial of rights. By World War I (1914–18), many community leaders were members of the Socialist Party and in some way affiliated with the revolutionary Ghadar Party which sought the overthrow of the British in India. As the organization was infiltrating the United States, it was crushed in Canada and many of its leaders forced out of the country. With the breakup of the old British imperial system after World War II (1939–45), newly independent countries had to negotiate treaties providing for regular immigrant status. The Canadian government made some gestures toward India but major reform was slow in coming.
In 1947, Indians in Canada finally were enfranchised. The Immigration Act (1952) provided for reunification of immediate family members, and the subsequent order-incouncil (P.C. 1956-785) allowed an annual quota of 150 Indians beyond those eligible under the category of immediate- family sponsorship. When Canada relaxed social and ethnic barriers in the early 1960s, more South Indians began to immigrate, most frequently choosing Ontario or Quebec for settlement. By 1969, India became one of the top 10 source countries for Canadian immigration. Immigration peaked in the early 1970s, after which an economic downturn in Canada led to more restrictive policies based on desired skills. By the turn of the 21st century, the Indian community in Canada included much ethnic diversity and numerically had shifted from west to east. In 2001, 314,685 Indian immigrants were living in Canada, with more than 235,000 born in India and most of the rest in Fiji, Trinidad and Tobago, Kenya, Uganda, and Tanzania. About 92 percent arrived after 1971, 156,000 between 1996 and 2001 alone. More than three-quarters of all immigrants came under family reunification provisions. In the 1990s, however, increasing ethnic and religious tensions in India led to a greater concern for political refugees. Whereas only six of 4,115 refugee visas were granted between 1977 and 1988, the following 10 years (1989 and 1998) saw 2,621 claims granted by the Immigration and Refugee Board, 27 percent of all claims received.
See also Bangladeshi immigration; Pakistani immigration; South Asian immigration; Sri Lankan immigration.