The Irish were the first of Europe’s many impoverished peoples to seek economic advantages in the New World in large numbers in the 19th century, providing one of the great immigration streams to both Canada and the United States. According to the 2000 U.S. census and the 2001 Canadian census, 30,528,492 Americans and 3,822,660 Canadians claimed Irish descent. Most Irish immigrants originally settled in major urban centers, most prominently New York City, Boston, Philadelphia, Montreal, and Quebec. Because significant Irish immigration began early in the 17th century and continued for 300 years under a wide variety of circumstances, the Irish are now spread throughout North America and have become an integral part of American and Canadian culture.
The island of Ireland covers a little more than 32,000 square miles in the North Atlantic Ocean, about 80 miles west of Great Britain. In ancient times, it was inhabited by Celtic peoples, and the land was usually divided among multiple kings. The Irish were converted to Christianity in the fifth century by St. Patrick and for hundreds of years produced outstanding Christian scholars and missionaries. By the 12th century, English kings established a foothold near modern Dublin and gradually extended their control over the eastern half of the island. During the 1640s, most of Ireland was brought under English control by Oliver Cromwell, leading to a diffuse but persistent Irish resistance. Beginning in the 15th century, large numbers of Scots and English citizens were resettled in Ireland, mostly in the six counties of the north, on lands confiscated from the rebellious Irish nobility (see Ulster). These settlers formed the basis of the Protestant Ascendancy, a minority population that gradually came to view itself as Irish. By the late 18th century, many members of the Protestant Ascendancy were themselves calling for either self-government or complete independence from Great Britain. After the rebellion of 1798, Ireland was brought under more direct British control with the creation of the United Kingdom of Great Britain and Ireland (1801). Throughout the 19th century, resolution of the Irish problem was continually hampered by two closely related issues: the question of the traditional unity of the island of Ireland and the cultural and religious division of the land between the Protestants of the north and the Roman Catholics of the south. The Irish Civil War (1919–21) led to the division of the land into the Republic of Eire—making up 27,133 square miles, or about 85 percent, of the island, fully independent from 1937, and Northern Ireland—the six counties of the north (5,451 square miles), which remained legislatively linked to Great Britain. Eire’s population of 3.8 million (2001) was 92 percent Roman Catholic; 45 percent of Northern Ireland’s 1.7 million people (2001) were Roman Catholic. With Catholic population growth in the north steadily outstripping that of Protestants, it was expected that Catholics would constitute the majority population in the north within a relatively short period of time, thus enhancing the possibility that the island will be politically reunified.
Following the Protestant Reformation of the 16th century, Irish exiles, revolutionaries, and dispossessed Catholics frequently immigrated to Spain, France, and the Low Countries. In the 17th century alone, it has been estimated that there were 35,000 Irish soldiers in the French army. These, along with Irish merchants employed by France, made their way to New France in significant numbers during the 17th and 18th centuries. In 1700, there were 130 families either fully Irish or of mixed Franco-Irish heritage. As political turmoil in Ireland increased, France and New France remained popular destinations for those with strong anti-British sentiments, including a few disgruntled settlers from British colonies to the south. Protestant immigrants, however, far outnumbered Catholic immigrants until the 1820s, and most Protestants settled in the British colonies south of New France. Between 1717 and 1775, more than 100,000 Presbyterian Scots-Irish settled in America, mainly because of high rents or famine and most coming from families who had been in Ireland for several generations. In the colonial period, they were in fact usually referred to simply as Irish, making it difficult to determine exact figures. Although Scots-Irish filtered throughout the colonies, they most frequently settled along the Appalachian frontier and largely influenced the religion and culture of the frontier regions as they developed. Altogether this represented the largest movement of any group from the British Isles to British North America in the 18th century. Many came as indentured servants (see indentured servitude), driven to the American colonies by the desperate economic condition of their homeland. 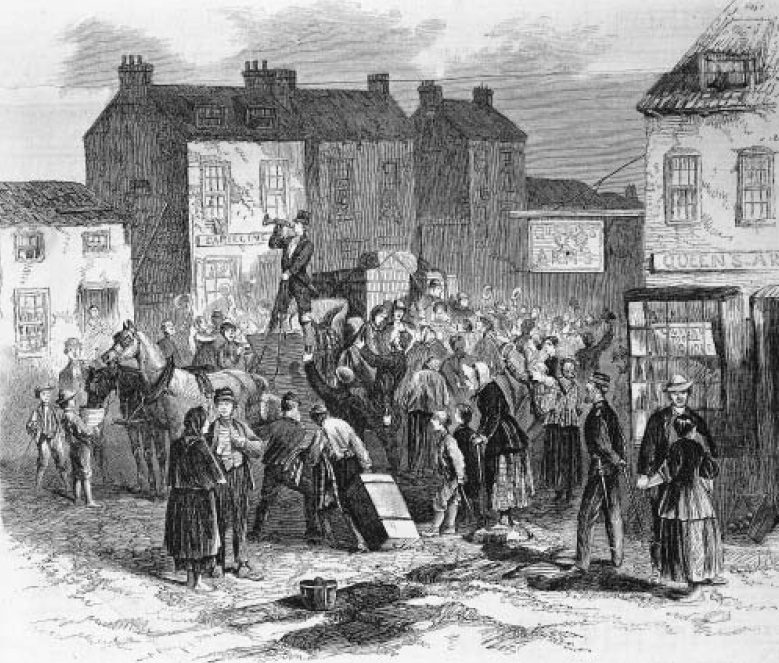