Italy was second only to Germany as a source country for immigrants to the United States after 1820. Although Italian immigration to Canada was much slower to develop, only Great Britain sent more immigrants there between 1948 and 1972. According to the 2000 U.S. census and the 2001 Canadian census, 15,723,555 Americans and 1,270,370 Canadians claimed Italian descent. Early areas of Italian concentration were New York, New York; Boston; and Pennsylvania, though the Italian population dispersed widely throughout the country during the 20th century. During the 19th century, almost all Italian Canadians lived in Montreal. By 2001, Toronto had the largest concentration of Italians, and Montreal, the second largest.
Italy consists of a long peninsula, the large islands of Sicily and Sardinia, and numerous smaller islands, all situated in the central Mediterranean Sea. It is bordered by France on the west, Switzerland and Austria on the north, and Slovenia on the east. It covers 116, 324 square miles, and in 2002, it had a population of about 58 million. More than 95 percent of the population is ethnically Italian, and more than 80 percent are Roman Catholics. Though Italy was the location of the great Roman civilization, it was divided politically throughout the Middle Ages, and its affairs often revolved around the papal court in Rome. The cultural revival known as the Renaissance began in northern Italy during the 14th century, producing some of the greatest scholars, artists, and philosophers in history. Various parts of the Italian peninsula were ruled by France, the Holy Roman Empire, Spain, and Austria until the nationalistic Risorgimento movement succeeded in unifying all the Italian states during the 1860s. Though on the victorious side of World War I (1914–18), Italians were dissatisfied with the peace settlement and hit hard by the weakened international economy. This led to the rise of the Fascist dictator Benito Mussolini, who led Italy into World War II (1939–45) on the side of Nazi Germany. After being defeated, Italy was reorganized as a republic (1946). Though politically unstable throughout the 20th century, the country avoided excessive social turmoil and played a leading role in the development of the North Atlantic Treaty Organization and the European Union.
Many of the earliest European explorers of North America were Italians, including Christopher Columbus, John Cabot, Amerigo Vespucci, and Giovanni da Verrazano. Some northern Italians traveled to North America during the 17th and 18th centuries, settling in New York, Virginia, Rhode Island, Connecticut, Pennsylvania, Maryland, and Georgia. Actual Italian settlement remained small, however, until after Italian unification during the 1860s. Between 1820 and 1860, only about 14,000 Italians immigrated to the United States, most coming as individuals from northern Italy, seeking economic opportunity. Some were attracted to the West Coast with the California gold rush of 1849. By the Civil War (1861–65), Italians were widely dispersed around the country, with California (2,805) and New York (1,862) having the largest populations. The first substantial migration came after the promulgation of a new Italian constitution in 1861, which tended to benefit the industrialized and advanced north, at the expense of the already impoverished, semifeudal agricultural south. As the population in Italy soared, increasing from 25 million in 1861 to 35 million in 1901, the plight of peasant laborers in the south worsened. Large estates were still often controlled by absentee landlords who did little to bring modern technology into the farming process. As a result, desperate sharecroppers and laborers left the wornout soil for new opportunities in the United States.
Italian immigration increased dramatically during the 1880s, with the source area gradually shifting from north to south. Between 1876 and 1924, when the restrictive JOHNSON- REED ACT was passed, more than 4.5 million Italians immigrated to the United States, about three-quarters of them from the impoverished south. Typically immigrants were young men who hoped to work one or two seasons before returning to Italy to start a better life. They usually spoke no English, so they turned to labor bosses (see padrone system) who established widespread networks for providing Italian labor to construction jobs throughout the East. Because the padrones sometimes cheated the vulnerable immigrants, they were carefully scrutinized by government and social workers and began to decline in influence by the first decade of the 20th century. After the turn of the century, gender rates were more balanced. By 1910, Italian women made up more than one-third of the female workforce in New York’s garment industry (see International Ladies’ Garment Workers’ Union) and more than 70 percent of the total workforce of the artificial flower industry.
The rate of return for Italians was high. Between 1899 and 1924, 3.8 million Italians arrived, while 2.1 million returned to Italy during the same period. Italian immigration reached its peak in the first decade of the 20th century, when more than 2 million Italians arrived. Generally poor, uneducated, and Roman Catholic, Italians suffered severely from nativism. As a result, they created social enclaves—Little Italies—in most major American cities, fostering a love of the old country and traditional ways of life, though these neighborhoods were seldom inhabited solely by Italians. In part, this was because Italian immigrants frequently moved. In the first generation, they generally lived in the worst slums of New York City, Boston, Philadelphia, Chicago, and San Francisco. By the turn of the century, Italian families had often moved to more spacious working-class neighborhoods. By 1910, there were 340,765 Italian immigrants in New York City, the largest Italian population outside Italy and much larger than such famous Italian cities as Florence and Venice. New York’s Italian community, like most others in the country, was dominated by southern Italians. The one major exception to this trend was San Francisco, where fewer southern Italians migrated. 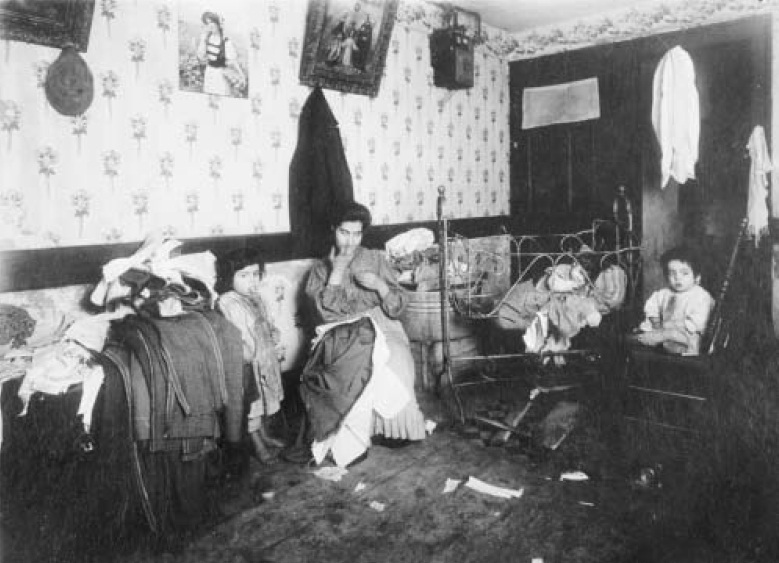 This 1912 photo shows Mrs. Guadina, a struggling Italian immigrant in NewYork City, trying to complete her batch of piece work in order to be paid. According to the visiting city official, there seemed to be no food in the house, the father was out of work, and a fourth child was expected soon. (Photo by Lewis W. Hine for the Department of Commerce and Labor, Children’s Bureau/National Archives)
By the late 1920s, Italian immigration had dropped significantly. Though Italian Americans numbered in the millions, they still had little political power to show for it. Fiorello H. La Guardia, mayor of New York City from 1934 to 1945, was a notable exception. About 116,000 came during the 1930s and 1940s, most blending smoothly into the growing middle-class Italian community. Immigration revived during the economic boom of the 1950s and 1960s, when 400,000 arrived, but tapered off again thereafter. Greater political stability and economic development in Italy after 1980 kept immigration numbers relatively low. Between 1992 and 2002, Italian immigration averaged about 2,500 per year.
Much less receptive to non-British immigrants, Canada was slow to encourage Italian immigration. A small number of nobles aided in the French and British settlement of North America. Enrico di Tonti served as a lieutenant on several of explorer René-Robert Cavelier de La Salle’s expeditions between 1679 and 1682. After the end of the Napoleonic Wars (1815), several hundred Italians who had served in the Meuron and de Watteville foreign regiments of the British army settled in Canada, principally around Drummondville, Quebec, and in southern Ontario. A small number of Italians immigrated individually during the 19th century, but the numbers remained small until the turn of the century. In 1901, there were still fewer than 11,000 Italians in Canada, almost all of whom lived in Montreal. Between the 1870s and 1914, more than 13 million Italians emigrated. Before 1900, about 70 percent were bound for Argentina, Brazil, and other South American destinations, and most of the rest for the United States. After 1900, about two-thirds settled in North America. The number choosing Canada was small, and often closely related to work opportunities originating in the United States. The Canadian Pacific Railway, for instance, imported laborers both from the United States and Italy.
The great period of Italian immigration to Canada came during the 1950s and 1960s, when more than 500,000 immigrants arrived. Though many left Italy as temporary workers, a far greater number of the post–World War II immigrants stayed to settle. As the Canadian economy expanded, Italy became an important source for construction workers and unskilled labor, taking advantage of new Canadian policies that liberalized provisions of family sponsorship. The Canadian government concluded a bilateral agreement with Italy in 1950, allowing Italian Canadians greater opportunities for bringing family members into the country. During the 1950s, about 80 percent of Italian immigrants were sponsored family members. The more restrictive immigration regulations of 1967 made it more difficult for unskilled Italians to qualify and coincided generally with a revival in the Italian economy. As a result, Italian immigration declined sharply during the 1970s, when only 48,000 arrived. In the 1980s, still fewer Italians came, averaging less than 2,000 per year. Of the 314,455 Italian immigrants residing in Canada in 2001, fewer than 15,000 came during between 1981 and 2001.
See also Canada—immigration survey and policy overview; United States—immigration survey and policy overview.