Korean immigration to North America remained relatively small until U.S. and Canadian immigration reforms in the 1960s eliminated racial limitations on entrance. According to the 2000 U.S. census and the 2001 Canadian census, 1,228,427 Americans and 101,715 Canadians claimed Korean descent. The largest concentrations of Koreans were in southern California and the New York metropolitan area in the United States. More than half of Canadian Koreans lived in Ontario, most of them in Toronto. There was also a large concentration in Vancouver.
The Korean peninsula, surrounded on three sides by the Pacific Ocean and bordered on the north by the People’s Republic of China, was historically ruled as a single kingdom. It was divided in the aftermath of World War II (1939–45), and its borders fixed as a result of a truce ending the Korean War (1950–53). South Korea, democratic and closely tied to the United States throughout the cold war, occupies 37,900 square miles on the southern half of the peninsula. In 2002, the population was estimated at 47,904,370, with 49 percent being Christian and 47 percent Buddhist. Lying between South Korea and China is North Korea, which occupies 46,400 square miles. In 2002, the population of North Korea was estimated at 21,968,228. After more than 50 years of Communist rule, almost 70 percent of North Koreans are atheists or nonreligious, with most of the rest practicing traditional Korean religions, Buddhism, or Chondogyo. More than 99 percent of citizens in both the north and the south are ethnic Koreans.
Korean civilization borrowed heavily from China, and from the first century B.C. Korea was governed, to a greater or lesser extent according to the fluctuating strength of China, as a Chinese satellite. As China weakened in its conflict with the West during the late 19th century, Japan became increasingly aggressive in Korea, largely controlling the country from 1905 and formally annexing the peninsula in 1910. Following World War II, the Soviet Union occupied the peninsula above latitude 38 degrees north, while the United States occupied the peninsula south of that line. After a virtual U.S. withdrawal in 1950, North Korean troops invaded the south, supported by the Soviet Union and later by Communist Chinese troops, hoping to reunify the peninsula under a communist regime. By 1953, an uneasy truce was reached, and a de facto border was established near the original line of division. Fifty years later, the conflict was not fully resolved.
The first significant group of Korean immigrants came to the United States as plantation laborers during the first decade of the 20th century. Following U.S. annexation of Hawaii in 1898, Chinese and Japanese laborers gained more rights and thus became freer to strike or to move into better jobs. As a result of the Chinese Exclusion Act (1882), it was no longer possible to import Chinese laborers, so their jobs increasingly fell to Japanese and Korean immigrants. With poor economic prospects at home and an increasingly volatile political situation in the region, about 7,000 Koreans chose to migrate to Hawaii, most of them either bachelors or without their families. As a result of the 1907 Gentlemen’s Agreement with the U.S. government, Japanese and Korean laborers were denied visas by the Japanese government. A clause in the agreement did allow wives to join husbands already in the United States, however. Utilizing this loophole, between 1910 and 1924, more than 1,000 Korean women became picture brides of men they had never met. After the restrictive Johnson-Reed Act of 1924, few Koreans immigrated to the United States. Korean immigration was again triggered by the Korean War. As a central conflict in the cold war commitments of the United States, Koreans were eligible for refugee status. Between 1945 and 1965, about 20,000 Koreans entered the United States, some 6,000 of them under provisions of the War Brides Act (1946). Provisions under the IMMIGRATION AND NATIONALITY Act (1965) led to a sharp increase in applications, with an average of more than 30,000 Korean immigrants annually between 1972 and 1992. Most of them were either skilled workers or the wives of U.S. servicemen. Immigration from Korea sharply declined after the Los Angeles riots (1992), in which Korean-American businesses were often the targets of looting, to an average of less than 16,000 between 1993 and 2000. In 2001–02, the rate of immigration was higher, averaging almost 21,000. 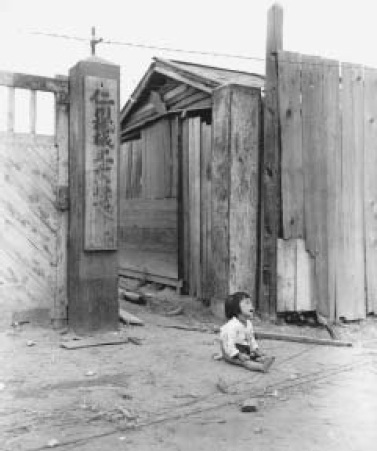 A Korean child sits alone and crying in the street following the invasion by the U.S. Marines 1st Division and South Korean marines in Inchon, Korea, September 1950. (National Archives/DOD,War & Conflict)
Koreans first came to Canada as students, after 1910, usually through the sponsorship of Christian missionaries. Their numbers were small, however, and they almost always returned home after their studies. During the 1960s, official policy in South Korea encouraging emigration, combined with the new immigration regulations of 1967, brought the first significant group of Korean immigrants. By 1975, there were almost 13,000 Koreans in Canada. Korean immigration grew steadily from the 1970s, especially after provisions for investment immigrants were instituted in the 1980s.
Of the more than 70,000 immigrants in Canada in 2001, only 70 came prior to 1961; more than 42,000 came after 1990. During the 1970s and 1980s, immigration averaged a little more than 1,200 per year, but the numbers jumped significantly in the 1990s. Between 1996 and 2001, an average of about 6,000 Koreans immigrated to Canada annually. In 2001 and 2002, Korea ranked fourth behind China, India, and the Philippines as a source country for immigrants. The dramatic increase during the 1990s was fueled by foreign students taking advantage of opportunities in Toronto, Vancouver, and Montreal. Between 2000 and 2002, Korea was the number one source country for foreign students in Canada, averaging almost 13,000 per year.