Old Order Mennonites were one of the few immigrant groups to maintain their distinctive identity across more than three or four generations after coming to North America. This identity was largely defined by the Anabaptist religious beliefs that led to their persecution in their Swiss and Dutch homelands and a simple, agricultural lifestyle that over the years has consistently rejected many technological innovations. By 2000, however, only about one-third of Mennonites were still engaged in agriculture. The majority had moved into the mainstream of American and Canadian life, residing in small towns and cities. According to the Mennonite churches of the United States and Canada, in 2003 there were 124,150 Mennonites in Canada and 319,768 in the United States, though these figures did not include unbaptized members of the community. The greatest concentrations of Mennonites in Canada were in Ontario and Manitoba, with smaller numbers in Saskatchewan and Alberta. The largest Mennonite communities in the United States were in Pennsylvania, Ohio, Indiana, and Kansas.
Mennonites were one of a number of independent, reforming groups known as Anabaptists (rebaptizers), who organized themselves initially in Switzerland during the 1520s. The term Mennonite was first used in the Netherlands to characterize the Anabaptist disciples of Menno Simons, who organized Anabaptists in the Netherlands and northern Germany during the 1530s. Unlike most Protestants of the 16th century, Mennonites rejected the idea of a state church, rejected military service, and required adult baptism at the time of confession. They also rigorously guarded the community by threat of banishment and regulation of behavior and marriage within the religious group. Mennonites divided into many groups over the years, including the Amish (see Amish immigration). Seeking to avoid persecution and enforced military service, Swiss Mennonites first settled in southern Germany and France before immigrating to the Pennsylvania colony in the 1680s. They established the first permanent Mennonite settlement at Germantown. In Pennsylvania, they became part of a group of early immigrants whom the English settlers called the Pennsylvania Dutch (from Deutsch), linked principally by their German heritage. Both population pressure and the violence of the American Revolution (1775–83) led to a considerable exodus from Pennsylvania to Canada. Between 1785 and 1825, about 2,000 Mennonites migrated, most to Waterloo County, Ontario. 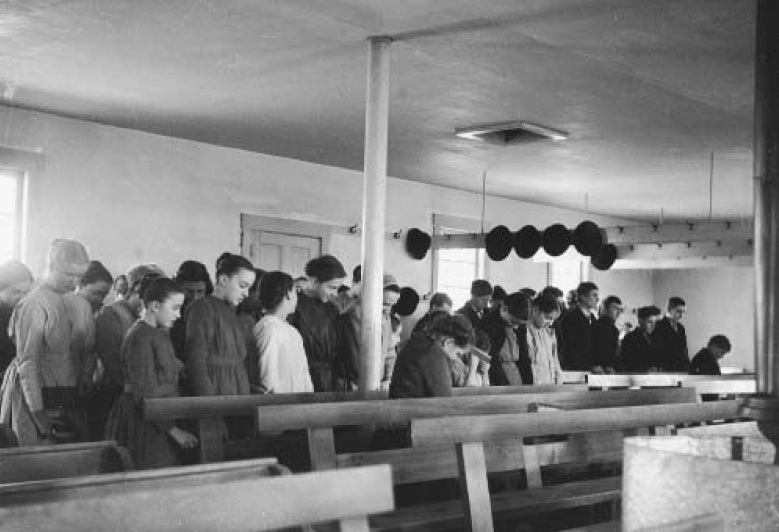 Mennonite children pray in church, Hinkletown, Pennsylvania, 1942. Persecuted throughout Europe for their clannishness and pacifism, Mennonites immigrated to the United States and Canada, seeking out isolated areas in which to settle. According to a writer in the Manitoba Free Press in 1876, he had “seen nothing as regards the industry equal to the Mennonites.” (Photo by John Collier/Library of Congress, Prints & Photographs Division)
Dutch Mennonites followed a different path, migrating in successive stages to northern Germany, Prussia, and finally Russia in the 1780s. Ever seeking to avoid military service, in 1873–74 about 13,000 German Mennonites emigrated from Russia to the central prairies of the United States, settling mostly in Kansas and Nebraska. In the same migration, 8,000 migrated to Canada, most to southern Manitoba. Facing an uncertain future following the Bolshevik Revolution, some 21,000 immigrated to Canada between 1922 and 1930 with the aid of the Canadian Mennonite Board of Colonization and transportation credits extended by the Canadian Pacific Railway. Another 4,000 settled in Mexico, Brazil, and Paraguay. After much hardship during World War II (1939–45), about 7,000 Mennonites immigrated to Canada as refugees from the Soviet Union (1947–50), with another 5,000 going to South America.