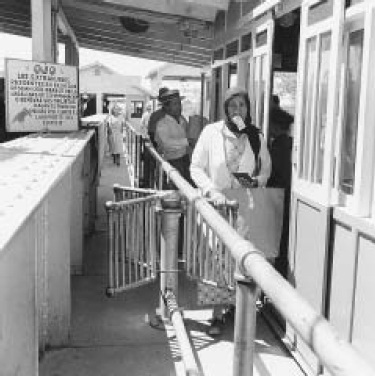 Mexicans enter the United States at the U.S. immigration station at El Paso,Texas, 1938.The terminal point for the Mexican Central Railroad, El Paso became the national center for recruitment of Mexican labor in the 1930s. (Photo by Dorothea Lange/Library of Congress, Prints & Photographs Division)
On January 7, 2004, President George W. Bush proposed the Temporary Worker Program, which would “match willing foreign workers with willing American employers, when no Americans can be found to fill the jobs.” More controversially, it would provide legal status to temporary workers, even if they were undocumented. Though not specifically mentioning Mexico, the announcement was clearly aimed to tackle “the Mexican problem,” a point highlighted by the presence at the ceremony of the chairman of the Hispanic Alliance for Progress, the president of the Association for the Advancement of Mexican Americans, the president of the Latin Coalition, and the president of the League of United Latin American Citizens. To be granted temporary worker status, the immigrant would be required to have a job and would have to apply for renewal after the initial three-year period was up. Undocumented workers would be required to pay a one-time fee to register, whereas those abroad who applied for legal entry would not be required to pay the fee. Bush also proposed an increase in the annual number of green cards issued by the government. Mexico’s president, Vicente Fox, called the proposal an “important step forward” for Mexican workers.
Mexican immigration to Canada was different from the American experience in both scale and type. Not only were numbers small—there were only 36,225 Mexican immigrants in Canada in 2001—but most Mexican immigrants were from the middle and upper-middle classes and a variety of backgrounds. One group included professionals who generally immigrated for economic improvement and often intended to stay in Canada. Another immigrant group was Mexican Mennonites who had emigrated from Canada to northern Mexico in the 1920s but returned to Canada during the 1980s economic crisis. Some Mexicans, including students, also marry Canadian citizens. Almost all Mexican immigrants are in the country legally. Although up to 5,000 contract workers were admitted each year in the 1990s, they were not formally immigrants and rarely were allowed to overstay their visas. More than half of Mexican immigrants came between 1991 and 2001. Almost one-third of them came between 1996 and 2001.