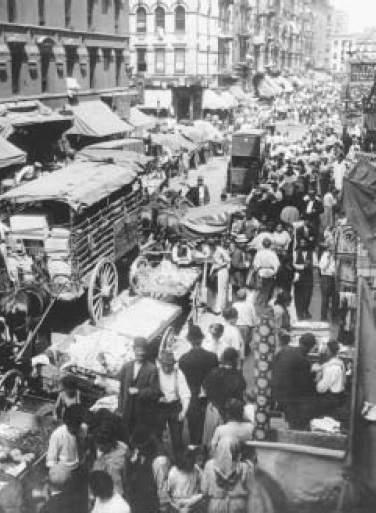 This street scene was typical of New York City’s Lower East Side ca. 1910. In 1910, immigrants and their children—most from eastern and southern Europe—composed about threequarters of the city’s population. Note the varieties of dress. (National Archives)
After World War I, U.S. consulates were established around the world and were responsible for issuing visas and checking credentials, thus lessening the work at the port of entry in the United States. Passage of the restrictive quota legislation of 1921 (Emergency Quota Act) and 1924 (Johnson-Reed Act) also significantly reduced the number of immigrants allowed into the United States and marked the beginning of Ellis Island’s decline as a processing center. Whereas annual immigration averaged about 740,000 between 1903 and 1914, it dropped to about 152,000 between 1925 and 1930, and 30,000 during the Great Depression years of the 1930s. By that time, Ellis Island had become better known for detention than for entry and in 1932, finally stopped receiving steerage-class immigrants.
The third defining phase of immigration to New York City came following the Immigration and Nationality Act of 1965, which led to a massive and partially unexpected influx of Asian and Hispanic peoples. Italians still represented the largest ethnic group in New York City in 1980, but Dominicans and Jamaicans, ranked only 26th and 24th, respectively, in 1960, were the city’s second and third largest ethnic groups 20 years later. Some European groups also grew as a result of the Immigration and Nationality Act. Italians, Greeks, and Portuguese took advantage of its provisions to reunite extended families. African Americans had migrated to New York in large numbers after World War I, but after 1965, the black population had become increasingly immigrant. By 1990, perhaps onequarter or more black New Yorkers were foreign born, creating some tension between the various African-American communities. The post–World War II era provided many challenges for America’s largest urban area, and the state and federal governments had to provide economic assistance to the city in the 1970s. City finances and conditions improved significantly during the 1980s and 1990s, though ethnic tensions were often strained. Two events during the late 1990s focused national attention on alleged civil rights abuses against blacks and immigrants. In 1997, New York police officers were accused of torturing a Haitian immigrant, Abner Louima, and one was eventually convicted. In 1999, a West African immigrant, Amadou Diallo, was killed when police officers mistook him for a rape suspect and shot him. Although four officers were indicted for murder, they were later acquitted. The terrorist attacks of September 11, 2001, on the World Trade Center in Lower Manhattan dramatically affected the city’s economy, with the federal government eventually pledging more than $24 billion for the reconstruction of the area of the attack. Although New York Muslims and Arabs were concerned about backlash in the wake of the attacks, the city remained peaceful as it pulled together in support of more than 320 firefighters and police officers who lost their lives, in addition to the almost 3,000 civilians who died in the attack. As if to highlight the international character of New York City, people of 80 nationalities died in the attack on the World Trade Center.