As a result of an ongoing and integral U.S. involvement with the politics of Nicaragua from the 1850s, a unique set of circumstances has brought a variety of Nicaraguan immigrants to the United States. According to the U.S. census of 2000, 177,684 Americans claimed Nicaraguan descent. There were few Nicaraguans in Canada: Only 6,190 Canadians claimed Nicaraguan descent in the 2001 census, though a number of organizations estimate the actual figure to be between 10,000 and 20,000. Miami was the center of Nicaraguan life in America, although communities could be found in most of the larger cities of California and Texas. Nicaraguans in Canada are overwhelmingly concentrated in Toronto, with a significant number living in Alberta.
Nicaragua occupies 46,400 square miles in Central America. It is bordered by Honduras on the north and Costa Rica on the south. In 2002, the population was estimated at 4,918,393. The people were ethnically divided between mestizos (69 percent), whites (17 percent), blacks (9 percent), and several Amerindian peoples (5 percent). More than 95 percent of Nicaraguans are Roman Catholic, reflecting almost 300 years of Spanish rule. The indigenous peoples of the region were conquered by Spain in 1552. Most died of disease, were killed, or intermarried with Europeans, creating the large mestizo population. After gaining independence from Spain in 1821, Nicaragua was united for a short period with other Central American countries as the United Provinces of Central America before finally becoming an independent republic in 1838. The United States became directly involved in Nicaraguan politics when in 1855, American adventurer William Walker was invited to the country to defend the ruling liberal party of General Francisco de Castellón. Walker instead seized the government for himself but was driven out of Nicaragua in 1857, ushering in a long period of conservative rule. U.S. Marines occupied the country for extensive periods between 1912 and 1933, generally in support of conservative political movements. In 1979, the marxist Sandinista National Liberation Front led a revolt that ousted dictator Anastasio Somoza. U.S. president Ronald Reagan became increasingly concerned about the threat of communism in “America’s backyard” and supplied U.S. backing to the contras, forces opposing the marxist Sandinistas, once more reviving cold war rivalries in the Western Hemisphere. As the Sandinistas gradually lost power in the late 1980s, thousands of Sandinistas and leftists fled to the United States and other countries of Central America.
It is difficult to document early immigration, as Nicaraguans were not counted apart from other Central Americans until 1960. Because of American involvement in Nicaragua, the United States was most often the choice of political dissidents or those fleeing political uncertainty. During the 1930s, many business and professional people also entered the country, settling in New York City, New Orleans, San Francisco, and Los Angeles. By the mid-1960s, Nicaraguans were the largest Central American national group in the United States and even more began to immigrate as a result of the 1965 Immigration and Nationality Act. In 1970, there were almost 30,000 Nicaraguans in the United States, most of European descent. The revolution of 1979 brought 20,000 or more Somoza supporters to the United States, and most of these settled in and around Miami. As civil war and a U.S. trade embargo destroyed the economy during the 1980s, young Nicaraguan men especially began to seek refuge and opportunity in the United States, many entering the country illegally. The Immigration and Naturalization Service estimated the undocumented population to be 76,000 in 1995, though some estimates suggest a figure twice as high. Under provisions of the Nicaraguan Adjustment and Central American Relief Act, in 1997, about 150,000 Nicaraguans were allowed to remain and work in the country, with many of them eventually becoming permanent residents. Between 1992 and 2002, legal immigration averaged about 10,000 annually. 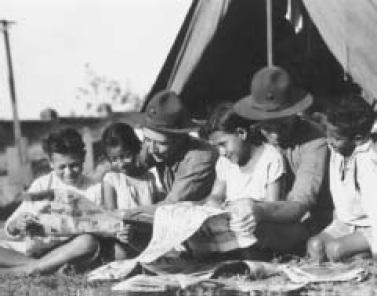 U.S. Marines pose with children in Nicaragua during United States occupation, 1927. (National Archives)
There were almost no Nicaraguans in Canada until the mid-1980s, but their numbers steadily increased after 1983. In 1991 and 1992 alone, more than 3,500 were admitted. Most Nicaraguans were young and poorly educated and had often lived for some time in Honduras, Costa Rica, or the United States. In 2001, of 9,380 Nicaraguan immigrants living in Canada, only 170 came before 1981. About 88 percent (8,255) arrived between 1981 and 1995, most as refugees.