Norway was the number one source country for Scandinavian immigration to North America, and second only to famine-ravaged Ireland in percentage of its population to immigrate. According to the U.S. census of 2000 and the Canadian census of 2001, 4,477,725 Americans and 363,760 Canadians claimed Norwegian ancestry. Because most Norwegian immigration came before World War I (1914–18), Norwegians have become largely assimilated to North American life and live throughout most parts of the United States and Canada. The greatest concentrations are still in and around the early agricultural settlements of the upper Midwest, with the greatest urban concentrations located in New York City; Chicago, Illinois; and Minneapolis, Minnesota. Almost one-third of Canadian Norwegians live in British Columbia.
Norway occupies 118,700 square miles of the western part of the Scandinavian peninsula in northwest Europe and extends farther north than any other European country. Sweden, Finland, and Russia border Norway on the east. In 2002, the population was estimated at 4,503,440. About 96 percent of the population is Norwegian, with ethnic roots in both Germanic and Lapp cultures. About 88 percent of Norway’s population is Evangelical Lutheran. During the period of Norwegian immigration to North America, religion played an important role in everyday life; by 2002, however, much of the adherence was nominal. Norway’s first ruler was Harald the Fairhaired, who came to power in 872. Between 800 and 1000, Norwegian Vikings raided and occupied many coastal areas of Europe, including Russia, Ireland, England, and France. The country was united with Denmark under a common king between 1380 and 1814. Norway was ceded to Sweden in 1814 after the Napoleonic Wars but became independent in 1905. Norway remained neutral during World War I and attempted to do so during World War II (1939–45) but was occupied by Nazi Germany between 1940 and 1945. The country abandoned its neutrality after the war and joined the North Atlantic Treaty Organization (NATO). Abundant hydroelectric and petroleum resources provided a solid economic base, giving Norway one of the highest living standards in the world. In 1994, Norwegians chose not to join the European Union.
Norwegians began immigrating to the United States in significant numbers in the 1840s and continued to come until the outbreak of World War I. Although the population of Norway grew rapidly during the 19th century, so too did personal freedoms and industry. The old social distinctions remained, however, and many among Norway’s peasantry— about 80 percent of the population—sought land and political equality in North America. Unlike many immigrants from eastern and southern Europe after 1880, most Norwegians came to North America with their families, intending to stay and establish a new life. By 1865, nearly 80,000 had settled in the United States, and with the end of the Civil War that same year, a great wave of Norwegian settlers arrived: 110,000 between 1866 and 1873 alone. By the 1870s, they had established a strong ethnic presence in southern Wisconsin, northern Iowa, Minnesota, and eastern parts of the Dakota territories. With a larger tide of immigration in the 1880s (176,586), 1890s (95,015), and 1900s (190,505), more Norwegians, both first and second generation, spread westward to Oregon, Washington, British Columbia, and Alaska. The Pacific coastal regions were reminiscent of western Norway, and Norwegians slipped smoothly into the fishing and trading economies. In a separate movement, the shipping boom of the late 1870s and 1880s brought 1,200 Norwegian ships to New York City annually, leading thousands of skilled seamen to jump ship and establish residence in the area, mainly Brooklyn, where they found ready employment. As a result, Brooklyn became the single largest Norwegian community in the United States. Of approximately 900,000 Norwegian immigrants to the United States, more than 85 percent came between 1865 and 1930. Between 1992 and 2002, an average of about 450 Norwegians immigrated to the United States annually. 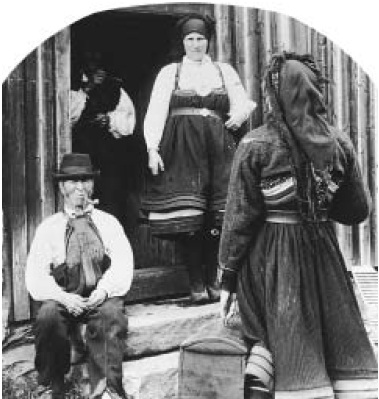 A Norwegian woman (with her back turned to the camera) bids her family farewell as she prepares to immigrate to America. Norway suffered more pressure from want of agricultural land than any other European nation in the 19th century, and the percentage of the Norwegian population to emigrate was second only to Ireland’s. (Library of Congress, Prints & Photographs Division)
The Canadian government encouraged Norwegian settlement, though cheaper land prices and better condition in the United States inhibited settlement in large numbers in the Canadian West until after 1900. As better lands in the United States were taken, an increasing number of Norwegians sought farmsteads on the Canadian prairies. Between 1900 and 1914, almost 20,000 Norwegians came directly from Europe and thousands more from the United States. With severe economic depression in Norway during the 1920s, 20,000 more Norwegians came before the Great Depression in the 1930s almost halted immigration. With a healthy economy at home since World War II, few Norwegians have chosen to emigrate. Average immigration in the 1980s and 1990s was only about 100 per year. Of Canada’s more than 360,000 Norwegians in 2001, barely 6,000 were immigrants, three-quarters of whom immigrated before 1971.
See also Ole Edvart Rølvaag.