The founder of the Pennsylvania colony, William Penn brought religious tolerance and cultural diversity to the English colonies in America. His colony became a haven for religious dissenters and open to all the peoples of Europe.
Penn was born in London into an aristocratic family with connections to the royal family. His father was an English admiral who amassed a considerable estate in Ireland. Given the best private education, Penn was nevertheless expelled from Oxford University in 1662 for holding unorthodox views. While managing the family estates in Ireland, he joined the Society of Friends (Quakers), which was a great disappointment to his family. In 1668, he published Truth Exalted, the first of 150 books, pamphlets, and tracts he wrote, many of which attested to his religious faith. He traveled extensively in Britain and Europe, preaching and promoting the doctrines of the Quakers and would be a significant historical figure for this alone. Penn violated numerous laws prohibiting non-Anglican preaching, meeting, and publishing and spent about two years in prison. In politics, he had friends among the supporters of Charles II (r. 1660–85) and James II (r. 1685–88) and among the Whigs who opposed the Stuart monarchy. For several years after 1691, he went into hiding, having been accused of treason. 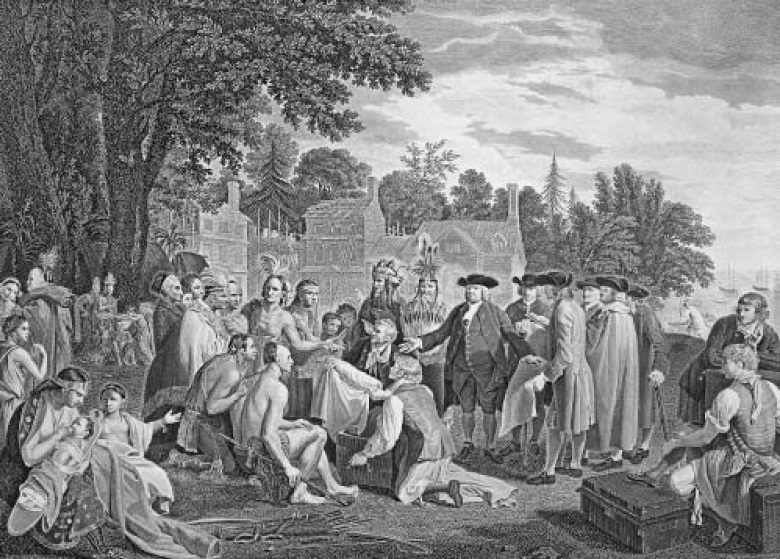 This engraving by John Hall, published by John Boydell in 1775, is captioned “William Penn’s treaty with the Indians, when he founded the Province of Pennsylvania in North America, 1681.” Penn was unique among early colonial founders in his regard for the rights of Native Americans, and he lived in general peace with the local Delaware Indians. (Library of Congress, Prints & Photographs Division)
Penn is best remembered, however, for the establishment of the Pennsylvania colony in America. In 1682, he became a proprietor of the West Jersey colony (see New Jersey colony) but soon abandoned it in favor of territory granted to his father by Charles II perhaps in payment of a debt and perhaps to rid himself of troubling Quakers. With the charter, Penn was given the right to both land and government, and he set out to provide a refuge for Quakers who were being persecuted in Europe. As a proprietor, he advertised widely throughout Europe in pamphlets such as A Brief Account of the Province of Pennsylvania (1681) and A Further Account of the Province of Pennsylvania and Its Improvements (1685), hoping to attract settlers. Translated into many languages, these tracts enticed settlers. While the colony itself was a success and became a model of the religious toleration that Penn so deeply supported, it provided Penn as proprietor with little income. Caught in the midst of English high politics and proprietary disputes, Penn traveled to America only twice (1682, 1699), staying about two years each time. He also proposed one of the earliest plans for the union of the American colonies, advocating a Congress with representatives from each colony. Upon returning to England in 1701, he found his finances in chaos and was briefly imprisoned. He died in 1718, enjoying little of the success of his famous colony.