The Pilgrims and the Puritans were two theologically related Christian groups that developed within the Church of England in the 16th century. Though relatively small in number, Pilgrim and Puritan settlers of the 1620s and 1630s established standards for religious conduct, morality, and hard work that came to represent the English immigrant ideal.
The Pilgrims and the Puritans were the spiritual children of the 16th-century Protestant Reformation, believers in the holiness of God, the sinfulness of humankind, and the ultimate authority of the Bible in matters of faith. King Henry VIII had rejected the authority of the pope and the Roman Catholic Church in 1535, forming the Church of England (Anglican Church) with the English monarch at its head. The Anglican Church remained a state church, with an official hierarchy and many ceremonial elements derived from the Roman church. Many English Christians sought to “purify” the Anglican Church by removing all the old elements of Romanism, including elaborate rituals, sumptuous priestly vestments, and questionable doctrinal statements. By the 1560s, these Anglicans were derisively known as Puritans. Among the Puritans, some believed that the only means of effective reform was to remove themselves from the Anglican Church. Because it was a crime to worship outside the Church of England, “separatist” congregations either had to worship secretly or leave the country. In 1608, a small congregation of Separatists moved from Scrooby, England, to Leyden, in the Netherlands, where they were granted complete freedom of worship. Fearing loss of their English identity, however, and recognizing the lack of economic opportunity in a foreign land, in 1620 a group of 102 settlers, mostly separatists and known as Pilgrims, migrated to America. Blown off course from their original destination in northern Virginia, they established a settlement, Plymouth, at their landing spot in southern Massachusetts, several hundred miles north of the location contracted for settlement while in England. Because they were technically outside of English jurisdiction and threatened by anarchy, family heads joined to produce the Mayflower Compact, the first written framework for a government in what is today the United States. After a disastrous first winter, which saw half their number perish, the following summer provided “all things in good plenty,” thus leading to a day of giving thanks and the unofficial founding of a national holiday, Thanksgiving, that would be officially established in 1863. Founded in an area of poor soil and little economic opportunity, the colony attracted few settlers. In 1691, Plymouth joined with the more prosperous Massachusetts Bay colony (see Massachusetts colony), some 50 miles to the north, which had been founded by Puritans in 1629. 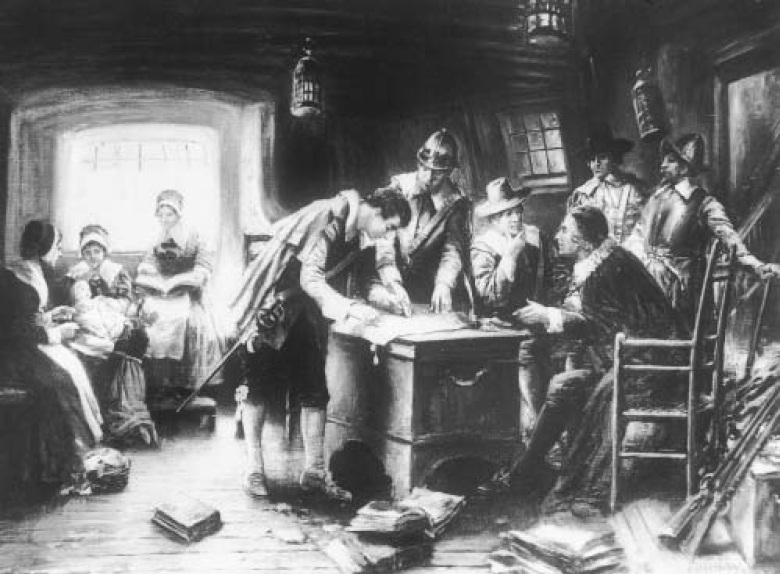 This painting by Percy Moran shows Pilgrim fathers Myles Standish, William Bradford, William Brewster and John Carver signing the Mayflower Compact in a cabin aboard the Mayflower, 1620.The development of self-government in the American colonies eventually led to revolution against Great Britain, and the establishment of an independent United States of America. (Library of Congress, Prints & Photographs Division)
John Winthrop and other Puritan leaders worked vigorously to reform the Church of England from within. By 1629, however, when it became clear that no meaningful reforms were likely, Puritan leaders obtained a royal charter for the Massachusetts Bay colony. With the curbing of religious and political freedoms in England throughout the 1630s, the colony grew rapidly to some 16,000 by the early 1640s. Having removed themselves from the Church of England in America, the Puritans developed an experimental form of church government known as Congregationalism, characterized by village church independence and voluntary association. Puritans also settled the regions of Connecticut (1636; see Connecticut colony) and New Hampshire (1623; see New Hampshire colony), which were granted colonial charters of their own in 1662 and 1677, respectively.