Poles represent the largest eastern European immigrant group in the United States and the second largest in Canada, behind Ukrainians. According to the U.S. census of 2000 and the Canadian census of 2001, 8,977,444 Americans and 817,085 Canadians claimed Polish ancestry. Poles spread throughout the United States, but the majority settled in the industrial North, especially in Buffalo and New York, New York; Chicago, Illinois; Pittsburgh, Pennsylvania; Milwaukee, Wisconsin; Detroit, Michigan; and Cleveland, Ohio. Almost half of Canada’s Poles live in Ontario, with large concentrations in Vancouver, British Columbia; Winnipeg, Manitoba; and Montreal, Quebec.
Poland occupies 117,400 square miles on the Baltic Sea in east-central Europe. It is bordered by Germany on the west, the Czech Republic and Slovakia on the south, Lithuania, Belarus, and the Ukraine on the east, and Russia on north. In 2002, the population was 38,633,912. About 94 percent of the people are ethnic Poles and more than 90 percent are Roman Catholic. Slavic tribes in the area were converted to the Roman Catholic Church in the 10th century. Poland was a great power from the 14th to the 17th centuries. Unable to create a strong monarchy, it gradually declined in influence and was eventually partitioned (1772–95) among Prussia, Russia, and Austria, with the core of the country falling under Russian control. During the 19th century, Polish nationalism ran high, leading to a number of failed insurrections. Overrun by the Austro-German armies in World War I (1914–18), Poland declared its independence on November 11, 1918, and was recognized by the Treaty of Versailles in 1919. Germany and the Soviet Union invaded Poland in September 1939, dividing the country. During World War II (1939–45), some 6 million Polish citizens were killed by the Nazis, half of them Jews. With Germany’s defeat, a Polish government- in-exile in London was recognized by the United States, but by 1947, Poland fell under the control of its Communist Party, subservient to the Soviet Union. From the 1940s to 1990s, Poland figured largely in the cold war strategies of both the United States and the Soviet Union. In 1980 and 1981, the trade union Solidarity grew to a membership of more than 10 million and began to directly confront the Communist government. By 1989, Poland secured free elections without the interference of the Soviet Union, thus becoming the first partner of the Eastern bloc to break away.
Some Poles came to the United States in the 18th and early 19th centuries, including noblemen Tadeusz Ko´sciuszko and Casimir Pul⁄aski, who fought against the British in the American Revolution (1775–1783). It has been estimated that about 2,000 Poles immigrated to the United States between 1800 and 1860, including many lesser nobles and members of the intelligentsia. There were also a number of agricultural communities established in Texas, Michigan, and Wisconsin. The first large settlement of Poles began around 1880 and continued into the 1920s, when the restrictive Johnson-Reed Act severely reduced the numbers allowed to enter. Exact figures are impossible to ascertain, as most Poles were counted as immigrants of the states from which they came—usually Prussia, Russia, or Austria. General estimates place the number of Polish immigrants between 1850 and 1914 at about 2.5 million. Until the 1890s, the largest numbers came from Prussia (Germany after 1871), where agricultural modernization and anti- Catholicism drove Poles toward North America. By 1900, perhaps half a million German Poles had immigrated. During the 1880s and 1890s, the downturn in international grain prices hit Austria and Russia particularly hard. Thereafter, Austrian and Russian Poles, generally less skilled and more destitute, became the more common immigrant. Most eventually went to work in mines, steel mills, or the meatpacking industry. By 1914, perhaps 800,000 had come from each country.
During the 1920s, more than 220,000 Poles immigrated to the United States before the Johnson-Reed Act established Poland’s quota at fewer than 6,000 per year. By that time, however, Poles were well established in the United States and had already created 800 Polish Roman Catholic parishes. Between 1945 and 1953, more than 150,000 Poles were admitted to the United States, most as refugees or as former Allied combatants (see World War II and immigration). By the 1970s, most had entered the American mainstream and were moving away from the inner cities. After Poland’s return to democracy in 1988, there was a resurgence of immigration, with most Polish immigrants seeking to escape from depressed economic conditions in the former communist country. Between 1981 and 2000, about 250,000 Poles came to the United States. 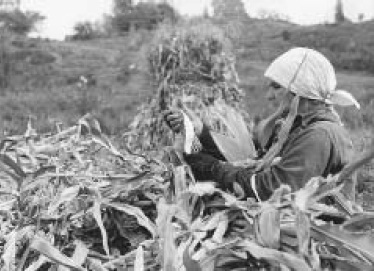 A Polish immigrant husks corn, near Greenfield, Connecticut, in 1941. Prior to World War II, most Poles were of the working class and highly concentrated in the northern United States and on the prairies of Canada. (Photo by John Collier/U.S. Library of Congress)
Polish immigration to Canada took roughly the same course as that to the United States. A handful of scattered noblemen, adventurers, and settlers arrived in Canada from the late 18th century through the 1850s. By 1885, perhaps 3,000 Poles lived in Canada, most having emigrated from Prussian territory. Between 1891 and 1921, the number of Poles rose steadily to more than 53,000. Unlike those who settled in the United States, a large percentage were agriculturalists, encouraged in western settlement by Minister of the Interior Clifford Sifton. Between the reestablishment of Polish independence in 1919 and implementation of the restrictive P.C. 695, about 40,000 Polish immigrants came to Canada, many diverted away from the United States by restrictions of the Johnson-Reed Act. From the 1920s, Toronto gradually replaced Winnipeg as the center of Polish culture in Canada. As in the United States, Canada accepted a large number of Polish refugees in the wake of World War II (1939–45) and the imposition of Soviet control. Between 1945 and 1956, about 64,000 Poles settled in Canada, and the numbers thereafter declined to an average of less than 2,000 per year until 1980. Through the political turmoil of the 1980s, about 10,000 Poles immigrated to Canada annually before numbers leveled off in the 1990s. Of Canada’s 180,415 immigrants in 2001, about 70,000 came between 1981 and 1990, and 43,000 between 1991 and 2001.