The Canadian province of Quebec is unique in North America in maintaining a predominantly French heritage, despite being surrounded by English-speaking areas that would eventually become the Canadian provinces of Ontario, New Brunswick, and Newfoundland and the U.S. states of Maine, Vermont, New Hampshire, and New York. As a result, Quebec eventually gained a considerable measure of autonomy and an independent immigration policy.
Samuel de Champlain founded the first permanent French settlement at Quebec in 1608, a fur-trading post that linked France with the vast interior regions of North America that formed the core of the large colonial territory known as New France. Along with the commercial impulse came missionaries. In 1642, the Société de Notre-Dame de Montréal pour la conversion des Sauvages de la Nouvelle France founded Ville Marie, later known as Montreal. Administrative mismanagement, failure to secure settlers, and the constant threat from the region’s Native Americans brought a complete reorganization of the government, which was brought under royal control in 1663. During the entire period of French control, only about 12,000 permanent settlers immigrated to New France, with most concentrated along the St. Lawrence Seaway, which came to be known as Canada and is roughly coterminus with the modern province of Quebec. According to a Swedish visitor in the 18th century, the heartland of Canada was “a village beginning at Montreal and ending at Quebec,” for “the farmhouses are never above five arpents [293 meters] and sometimes but three apart, a few places excepted.”
Through an agreement with the French West Indies Company, between 1663 and 1673, several thousand settlers arrived, most from Brittany and Île-de-France, though some were recruited from Holland, Portugal, and various German states. Among this wave of immigrants, however, there were few families. Most were trappers, soldiers, churchmen, prisoners, and young indentured servants (see indentured servitude); by 1672, all plans for systematic immigration were stopped. After 1706, merchants from a number of European countries and their local agents were granted permission to do business in Canada, leading to a thriving trade in Quebec and Montreal. Indentured servants occasionally came, and soldiers stationed in the colony as a result of the ongoing conflict with Britain sometimes stayed on. The number of slaves was always small, perhaps 4,000 Native American and African slaves for the entire duration of New France. More than a thousand convicts were forcibly transported. Remarkably, from this miscellaneous and meager collection of 9,000 immigrants, the population of Canada swelled to 70,000 by the 1750s. In a series of wars for control of North America (1689–1763), virtually all of New France was lost to the British, the final blow coming in the Seven Years’ War (1756–1763).
In 1763, France signed the Treaty of Paris, handing over New France east of the Mississippi River to Great Britain. Canada’s French population of some 70,000 was brought under control of the British Crown, which organized the most populous areas as the colony of Quebec. At first administering the region under British law and denying Catholics important rights, the British further alienated their new citizens. In an attempt to win support of Quebec’s French-speaking population, Governor Guy Carleton in 1774 persuaded the British parliament to pass the Quebec Act (1774), which guaranteed religious freedom to Catholics, reinstated French civil law, and extended the southern border of the province to the Ohio River, incorporating lands claimed by Virginia and Massachusetts. This marked the high point of escalating tensions that led to the American Revolution (1775–83) and eventual loss of the thirteen colonies and trans-Appalachian regions south of the Great Lakes.
Loss of the thirteen colonies led to the migration of 40,000–50,000 United Empire Loyalists, who had refused to take up arms against the British Crown and who were thus resettled at government expense, most with grants of land in Nova Scotia, New Brunswick, and western Quebec. The special provisions of the Quebec Act, which aimed at preserving French culture and encouraging loyalty, angered the new English-speaking American colonists. As a result, the British government divided the region into two colonies by the Constitutional Act of 1791. Lower Canada, roughly the modern province of Quebec, included most of the French-speaking population. There, government was based on French civil law, Catholicism, and the seigneurial system of land settlement. Upper Canada, roughly the modern province of Ontario, included most of the Englishspeaking population and used English law and property systems. Both colonies had weak elected assemblies. After the French Revolution, Revolutionary Wars, and Napoleonic Wars (1789–1815), hard times led English, Irish, and Scottish people to immigrate to British North America in record numbers. Fearing loss of control of the government of Lower Canada, some French Canadians revolted in 1837, which triggered a rebellion in Upper Canada. Both rebellions were quickly quashed, and the British government unified the two Canadas into the single Province of Canada (1841). This form of government did not work well, however, as the main political parties had almost equal representation in the legislature and thus had trouble forming stable ministries. 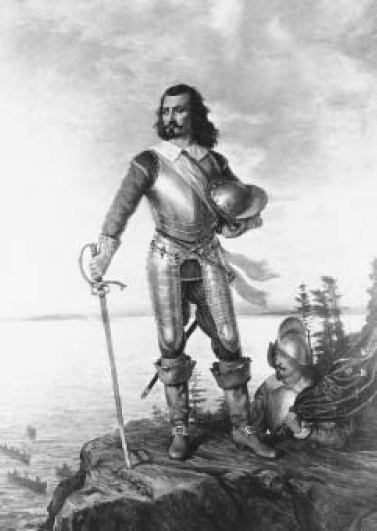 Samuel de Champlain founded the first permanent French settlement in the New World at Quebec in 1608. (Library of Congress, Prints & Photographs Division)
From 1848, the rapidly growing provinces in British North America won self-government and virtual control over local affairs. By the 1860s, there was general agreement on the need for a stronger central government, which led to the confederation movement. Passage of the British North America Act in 1867 created the Dominion of Canada and reestablished French-speaking Quebec as a separate province. Although citizens of Quebec were permitted to use both French and English as their official language and granted control of education and civil law, friction over a wide variety of issues heightened the province’s sense of isolation. Quebec disapproved of government policies during the Boer War (1899–1902), World War I (1914–18), and World War II (1939–45). It was the most isolationist part of Canada, vigorously opposing all immigration but especially the immigration of Jews. By 1968, an independent Ministry of Immigration of Quebec was established, enabling Québecois to maintain control of the ethnic population of the province, ensuring the priority of francophone culture. Leaders also opposed vigorous industrialization, as enriching English entrepreneurs while destroying traditional French- Canadian culture. Finally, in the 1960s widespread disagreement over apportionment of taxes led to a separatist movement that continued into the 21st century under the banner of the Parti Québecois (formed in 1968). In a dramatic referendum in October 1995, with more than 94 percent of the electorate casting ballots, 50.6 percent voted against Quebec sovereignty. Parti Québecois leaders openly blamed “ethnics” for siding with the anglophones in order to thwart independence. Most observers believe that Quebec’s independence will come in the relatively near future.
Montreal is the economic heart of the province of Quebec and thus attracts a large number of migrants from other parts of Canada, as well as immigrants from outside the country. The city of Quebec, on the other hand is more homogenous and more closely reflects the traditional concerns of the French founders. The largest non-European ethnic groups in Montreal in 2001 were Haitian (69,945, 2.1 percent of the population), Chinese (57,655, 1.7 percent of the population), and Greek (55,865, 1.6 percent of the population). No non-European ethnic group in the city of Quebec numbered more than 1,400, or 0.2 percent of the population (Chinese).
See also Canada—immigration survey and policy overview.