Railways were integral to immigration in several ways. First, they were the physical means by which the vast majority of European immigrants made their way from interior regions of Britain, the German states, and the Austrian and Russian Empires to port cities like Liverpool, in England, and Hamburg, in Germany. Prior to the development of the railroad, land travel to a distant port was slow, frequently dangerous, and often unrealistic. Once in North America, the railroad efficiently and inexpensively transported immigrants to places of opportunity far away from ports, including industrial areas, such as Cleveland, Ohio; Detroit, Michigan; Pittsburgh, Pennsylvania; St. Louis, Missouri; and Chicago, Illinois, and the agricultural lands of the interior. Earlier travel by horse and wagon or on foot were both expensive and impractical for most immigrants, especially as they were undertaken in a foreign land and across places where one’s language was not spoken. Finally, the railroad was essential for bringing supplies to the interior and moving out wheat, cotton, cattle, gold, coal, and other commodities. For the West to be productive, it had to be connected to the Atlantic, Pacific, and Gulf coast ports.
Steam-powered railways were developed in Britain at the beginning of the 19th century. By the late 1820s, substantial railway lines were established in both Britain and the eastern United States. Within the next 10 years railway lines were constructed in Canada and most of western Europe. In 1869, the first transcontinental railroad was completed in the United States; in 1885, the last spike in the Canadian Pacific Railway was driven in the Monashee Mountains of British Columbia, laying the foundation for westward expansion to the interior prairies and the Pacific.
The rapid growth of railways in the United States and Canada during the 19th century provided many employment opportunities for immigrants and a means of dispersing them throughout the country. The Central Pacific Railroad, as it pushed to complete the first transcontinental railroad in the United States, employed more than 10,000 Chinese laborers. In 1850, American railway lines stretched 8,683 miles, all east of the Mississippi River. By 1890, there were 163,597 miles of track, including 70,622 miles west of the Mississippi. Such large capital investments necessitated cheap labor and allowed national economies to maintain stability while absorbing thousands of immigrants. Masses of Irish immigrants who could not afford to start farming, instead accepted backbreaking jobs with the railway. Beginning in 1862, Irish workers were employed by the Union Pacific to construct the eastern section of the first U.S. transcontinental railway. The western section of the line was constructed almost entirely by Chinese immigrants from California employed by the Central Pacific. Along with large numbers of Greeks, Italians, Japanese, and Russians, Irish and Chinese immigrants continued to play a major role in railway construction throughout the United States and Canada. Once completed, railways increased worker mobility across the nation. Wealthier immigrants, usually of German origin, could arrange rail passage from their arrival city to Midwestern states, such as the Dakotas, where free homesteads were available.
When large projects demanded an immediate labor force, workers could be contracted by labor brokers from immigrant population centers, then shipped by rail anywhere in the country. The ready supply of immigrant workers greatly accelerated railway and industrial growth in the 19th century. In Canada, with fewer concentrations of laborers, short-term labor contracts were issued to workers from eastern Europe as late as 1913.
Railway companies also played a direct role in promoting immigration to North America. Before construction began, most railway companies received federal land grants along their proposed route. As early as 1855, the Illinois Central began to recruit immigrants from Britain, Germany, and Scandinavia to encourage population growth on the granted land. In the 1870s and 1880s, other companies followed suit, such as the Northern Pacific, which actually established its own Bureau of Immigration. Companies sent recruiting agents to Europe with newsletters and brochures to entice settlers to move to preplanned communities, offering free passage and discount land to immigrants who would agree to relocate. In Canada, the Canadian Pacific Railroad used similar techniques in London to market its massive federal land grants to British immigrants. Consequently, railways established specific patterns of ethnic settlement along their lines.
At the turn of the 20th century, an influx of principally male Mexican workers flooded the agricultural and railway labor markets of the southwestern United States. Railway worker camps formed the foundation for many modern Mexican-American communities. With the rise of the automobile culture in the 20th century, railways waned as the primary means of internal transportation in the United States but continued to provide a frequently undetectable method of crossing America’s southern border. 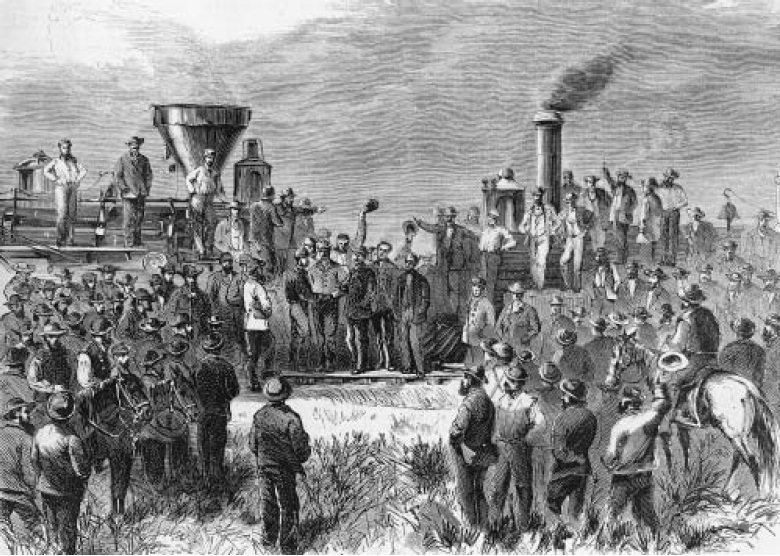 This engraving shows the completion of the Pacific Railroad and the meeting of locomotives of the Union and Central Pacific lines.The completion of the first transcontinental railroad in the United States in the summer of 1869 made possible the settling of the great central prairies. (Library of Congress, Prints & Photographs Division)
With the Canadian prairies filling more slowly than those in the United States, the role of the railroad remained more pivotal. With the dramatic decline of immigrant admissions and rise in alien deportations during World War I (1914–18), the Canadian government tried several means of attracting agriculturalists and domestics, who were in high demand. Its first choice of source country was clearly Great Britain, but the Empire Settlement Act was relatively unsuccessful in attracting the agricultural immigrants desperately needed for developing the prairies. More successful was the Railway Agreement of 1925, which authorized the Canadian Pacific and Canadian Northern railways to recruit agriculturalists and farm laborers from southern and eastern Europe, whose immigration to Canada was at that time “non-preferred.” Always seeking more customers, the railroads actively advertised in Europe and between 1925 and 1929 brought more than 185,000 immigrants to the agricultural west. The groups that most benefited from this last phase of direct railway settlement were Germans from both central Europe and Russia, Mennonites, Ukrainians, Poles, and Hungarians.
See also New Orleans, Louisiana.