A refugee is a special category of immigrant not subject to regular immigration quotas. In international law, a refugee is defined as a person fleeing natural disaster or past or future persecution on the basis of race, culture, or political or religious beliefs. Individual countries grant asylum—the right to legally resettle—according to national interests as embodied in domestic legislation. Because of international treaty obligations, both the United States and Canada provide special treatment to those deemed refugees, including economic assistance in first countries of asylum and selective resettlement in North America. Refugees have a legal status enabling them to work and receive welfare benefits, whereas asylum seekers are considered temporary guests who may at any point be declared illegal aliens. The United States has consistently resettled more refugees than any other country, though there has been considerable controversy over the terms of American policy.
Although Thomas Jefferson spoke eloquently on behalf of asylum for “unhappy fugitives from distress,” the United States followed no consistent refugee policy until after World War II (1939–45). With virtually open immigration to the United States prior to World War I (1914–18), it was not in most cases necessary to specially designate refugees. Thousands of religious and revolutionary exiles who might today qualify for refugee status were admitted to the young republic after 1776 but with no special legislative provisions. The American government implicitly recognized the refugee status of men and women who had been convicted of political crimes by excluding them from legislation aimed at prohibiting the immigration of criminals (1875, 1882, 1891, 1903, 1907, 1910). Shortly after World War II (see World War II and immigration), a number of measures admitted refugees according to special circumstances: President Harry S. Truman’s presidential directive of 1945 admitted 42,000 war refugees; the War Brides Act (1946) qualified wives and children of U.S. servicemen to enter; and the Displaced Persons Acts (1948, 1950) admitted more than 400,000 homeless Europeans. In 1951, the United Nations Convention Relating to the Status of Refugees established an international definition and prohibited forcible repatriation (refoulement), though it did not require any country to resettle refugees. The United States did not sign the Convention Relating to the Status of Refugees but devised similar policies through domestic legislation. The McCarran-Walter Immigration and Naturalization Act (1952) did not specifically address refugee status, leading to passage of the Refugee Relief Act (1953), granting asylum in the United States to those fleeing communist persecution. This formed the primary basis for establishing refugee status in the United States throughout the cold war (1945–1991) and was embodied in the permanent amendment of the Immigration and Nationality Act in 1965, which established a preference class for those who “because of persecution or fear of persecution . . . have fled from any Communist or Communist-dominated country or area, or from any country within the general area of the Middle East.” From the mid-1950s through 1979, less than one-third of 1 percent of refugee admissions were from noncommunist countries, and as late as 1987, 85 percent of refugees were from the communist countries of Cuba, Vietnam, Laos, Cambodia, Afghanistan, Poland, Russia, and Romania. 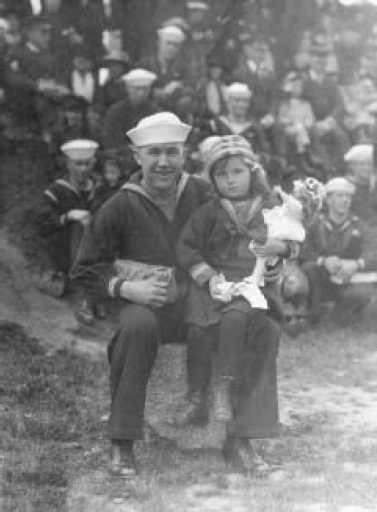 A refugee child is adopted by a U.S. sailor in May 1918. Although the American and Canadian governments had admitted refugees since the early colonial period, neither developed an official refugee policy until the 1950s. (National Archives)
The Refugee Act (1980), designed to bring U.S. law into compliance with international treaty obligations, separated refugee and immigration policy and adopted the broader UN definition of a refugee, leading to a great influx of immigrants. Nevertheless, the disparity between treatment of 130,000 Cubans who were granted refugee status following the Mariel Boatlift (1980) and the forcible return of thousands of Haitians, Guatemalans, and Salvadorans fleeing right-wing dictatorships was evident. Despite the broader provisions of the Refugee Act, the administration of President Ronald Reagan reduced refugee admissions by two-thirds and continued to favor those from communist countries. The Illegal Immigration Reform and Immigrant Responsibility Act (1996) further expanded the definition of a refugee to include anyone fleeing “coercive population control procedures,” a phrase specifically aimed at China.
Canadian policy after World War II favored international cooperative efforts to assist refugees in the country of first asylum. The Canadian Immigration Act of 1952 provides for Canadian resettlement of those who qualify under the United Nations Convention agreement, though candidates must pass through an extensive process handled by the Convention Refugee Determination Division of the Immigration and Refugee Board (IRB).