The quest for religious freedom has played an important role in immigration to North America from the 17th century to the present day. In some cases, it has been the preeminent reason for leaving homelands in which religious persecution was endemic. In more cases, religious freedom was one issue among others, as people sought both personal freedoms and economic opportunities not available in their home countries. 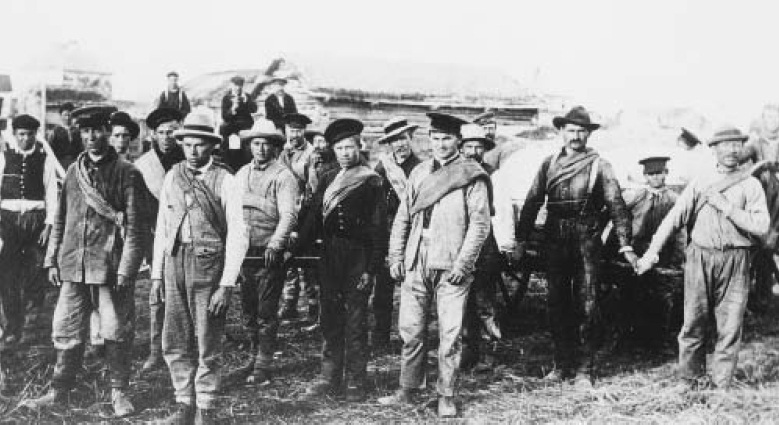 Doukhobors of the Thunder Hill Colony, Manitoba, move supplies from Yorkton, Saskatchewan, to their villages, 1899. Aided by Leo Tolstoy and Peter Kropotkin, more than 7,500 Doukhobors escaped czarist persecution to settle in the Canadian West after 1889. (National Archives of Canada)

The earliest settlers to come to North America mainly for religious reasons were the Pilgrims (see Pilgrims and Puritans), who settled in Plymouth Bay, Massachusetts. Having already separated from the Church of England and migrated to Holland in 1610, it was then easier for them to choose the drastic step of leaving Europe forever in 1620. The much larger migration of Puritans in the 1630s and 1640s, led by John Winthrop, hoped to build a "city upon a hill,” a model community where full citizenship was reserved for members of a reformed Church of England (later known as the Congregational Church). This ideal lasted only a few decades before secularization and democratization began to dilute the religious character of the Massachusetts colony. Nevertheless, the early religious principles of the Pilgrims and Puritans helped establish a cultural pattern that persisted broadly well into the 20th century. The decline of Puritan influence in state affairs by the late 17th century foreshadowed the religious tolerance that would be commonly practiced in the American colonies and later in the United States. Among the early British settlements in North America were other colonies founded principally for religious reasons. Maryland colony was established as a haven for persecuted Roman Catholics; Rhode Island colony and Pennsylvania colony both developed in response to the persecution of Baptists and QUAKERS, respectively, and were established with religious freedom as a fundamental principle. Just as internal mobility had been common in England and within the British Isles, it was endemic in southwestern Germany, Switzerland, and the Low Countries (Belgium and the Netherlands). As a result, smaller religious sects saw immigration as a potential solution to ongoing political and social disorder. As historian Bernard Bailyn has observed, "a thousand local rivulets fed streams of emigrants moving through northern and central Europe in all directions.” Migration began late in the 17th century and continued almost unabated until World War I (1914–18). By the mid-18th century there were already dozens of Amish (see Amish immigration), Mennonites (see Mennonite immigration), Dunker, and Schwenkfelder (see Schwenkfelder immigration) settlements, mostly in Pennsylvania. Gradually, throughout the 18th century, the power of state religion receded and religious freedom became the norm throughout the colonies. This freedom, while not universally changing people’s religious prejudices, was embodied in the first amendment to the new United States Constitution of 1789, stipulating that "Congress shall make no law respecting an establishment of religion, or prohibiting the free exercise thereof. . . .” Generally Britain’s Canadian colonies were less officially tolerant, but by the 1780s, there was little attempt to punish Catholics or Dissenters. Unlike the new republic to the south, however, Catholics did not enjoy full rights until later in the 19th century, when they gradually gained rights to vote and sit in legislatures.

The first major movements from the German states to the United States in the 1830s and from Norway and Sweden in the 1850s were related to persecution of pietistic sects in those areas. The much larger migration that followed until the turn of the century was less generally a religious movement, though communities established by earlier religious emigrants made it easier for all immigrants who followed. As a result, the religious impulse was important in immigration beyond the numbers who came to North America for strictly religious reasons.

Sometimes religion was a characteristic of great but accidental importance. The Irish had been fleeing their overpopulated island in the tens of thousands since the 1820s simply to live, and the need was all the greater as a result of the Great Famine of the 1840s. Though religion was not the reason for their migration, by the 1850s, they established an ethnic Catholicism that was unprecedented and in Canada reinforced the Catholic presence of the French. The nativism of the 19th century was significantly anti- Catholic in character, negatively reinforcing the American norm of white, Anglo-Saxon Protestantism. Italians too were almost universally Roman Catholic but feared no religious persecution in their homelands. That Greeks, Russians, and Ukrainians were members of Orthodox Christian churches was only incidental to their decisions to immigrate and their faith merely one of a dozen strange customs that clouded the sight of Americans and Canadians.

As nationalism grew as an ideological force throughout the 19th century, radical communal groups were almost always viewed hostilely and frequently were persecuted. As a result, groups of Amish, Mennonite, Doukhobor, and Hutterite settlers made their way to North America. The Amish and the Mennonites often settled with or near communities established in the 18th century, while the Hutterites and Doukhobors established themselves on the unsettled prairies of the United States and Canada between the 1870s and 1910. Their attempts to live communally and by pacifist principles tested the degree of religious tolerance afforded in both the United States and Canada. Both countries placed restrictions on communal living, and antipacifist sentiment was especially strong in the United States during World War I.

Although religion was less prominent a factor in driving the new immigration after 1880, it continued to play an important role in defining legal tolerance for all religions. Because Italians, Poles, and many Germans were Roman Catholic, Catholicism came to be identified with ethnicity. For specific groups, religion was still the principal reason for migration. Jews, for instance, faced an intensification of religious persecution in Russia and Austria after 1880 and thus looked to the religious freedom of the United States (especially between 1880 and 1900) and Canada (especially between 1900 and 1920). Many Jews who came, however, were not Orthodox, and some openly embraced socialist, rather than religious, solutions to problems. So, although old-stock Americans tended to identify people’s religion with their ethnicity, there was in fact considerable diversity in the practice of most of the Old World religions once their practitioners were transplanted to North America. In the wake of World War II (1939–45) and the ending of colonial empires between 1950 and 1970, Jews continued to seek freedom of religion in the West.

Canada and the United States proved to be a religious haven throughout the 20th century. Despite persistent anti- Semitism, particularly in Quebec, Jews continued to immigrate to the United States and Canada, first as refugees from German-held territories in World War II, and then as refugees from the officially atheistic Soviet Union. By the 1960s, they had largely entered the cultural mainstream. Communal groups such as the Mennonites were also driven from the Soviet Union and found acceptance in the United States and Canada. More significant in terms of numbers was the vast influx of non-Protestant settlers coming as a result of liberalized, nonethnic immigration policies enacted in the 1960s. Roman Catholic Mexicans and Filipinos and other immigrants from Latin America; Buddhist Chinese, Vietnamese, Laotians, and Cambodians; Hindu Indians; and Muslim Indians, Pakistanis, Bangladeshis, Iranians, Egyptians, and Palestinians significantly changed the character of many areas, including California generally, and especially the major metropolitan areas of Los Angeles and San Francisco, California; Houston, Texas; Seattle, Washington; Toronto, Ontario; and Montreal, Quebec. The United States and Canada continually affirmed the freedom of religious practice. Despite occasional outbreaks of nativism, notably in the wake of the September 11, 2001, terrorist attacks, which were broadly associated with Islamic religious extremism, there were few overt attacks on members of religious minorities, and when there were attacks, they were prosecuted criminally.