Though Russia controlled parts of the modern United States and Canada, it left relatively little cultural mark during its early 19th-century settlement of the Pacific Northwest. Russian presence is thus largely the product of immigration between 1881 and 1914. According to the U.S. census of 2000 and the Canadian census of 2001, 2,652,214 Americans and 337,960 Canadians claimed Russian descent, though many of these were members of ethnic groups formerly part of the Russian Empire and Soviet Union. By 2000, Russians were spread widely throughout the United States and Canada, though more than 40 percent of Russian Americans lived in the Northeast and almost one-third of Russian Canadians lived in Ontario.
Russia is the largest country in the world by landmass, occupying 6,585,000 square miles, or more than 76 percent of the total area of the former Union of Soviet Socialist Republics (USSR). It stretches from eastern Europe across northern Asia to the Pacific Ocean. Finland, Norway, Estonia, Latvia, Belarus, and Ukraine border Russia to the west; Georgia, Azerbaijan, Kazakhstan, China, Mongolia, and North Korea border on the south; the small Russian enclave of Kaliningrad, west of Lithuania, is bordered by Poland on the south. In 2002, the population was estimated at 145,470,197. In 1997, the ethnic composition of the country was 86.6 percent Russian and 3.2 percent Tatar. The remaining 10 percent was composed of relatively small numbers of more than a dozen ethnic minorities. The chief religions were Russian Orthodox and Muslim, although most Russians claimed no religious affiliation.
During the 18th, 19th, and 20th centuries, the transformation of Russian state boundaries significantly affected the character of its immigration. The old heartland of the Russian peoples was a region in eastern Europe between modern Kiev, Ukraine, and Moscow. The Slavic peoples who inhabited the Kiev region were driven northward by the Mongol invasion of the 13th century. By 1480, Ivan III (the Great) (r. 1462–1505) established Russian independence of the Mongols and began to forge a modern state. Ivan the Terrible (r. 1533–84), grandson of Ivan III, was the first grand prince to be called “czar” (awe-inspiring) and began the expansion of the state to include significant numbers of non-Russian peoples. Between 1667 and 1795, Russia conquered huge tracts of eastern Europe, mainly from the kingdoms of Poland and Sweden. These lands included the peoples of modern Latvia, Lithuania, Estonia, eastern Poland, Belarus, and Ukraine. In 1815, following the Napoleonic Wars, Russia acquired most of the remainder of Poland and Moldova (Bessarabia). Throughout the 19th century, Russia continued to expand, especially into the Caucasus Mountain region and central Asia, occupying regions that would later become the modern countries of Armenia, Azerbaijan, Georgia, Kazakhstan, Kyrgyzstan, Turkmenistan, Tajikistan, and Uzbekistan, as well as into Finland in the north. As a result, during the great age of immigration from eastern Europe between 1880 and 1920, more than a dozen major ethnic groups were often classified by immigration agents as “Russian,” though they were in fact part of these older nations. The Bolshevik Revolution of 1917 in Russia, which ushered in the world’s first Communist government, soon spread to most of the surrounding territories acquired by Russia, leading to the establishment of a new state, the USSR, or Soviet Union. The USSR was roughly coterminus with the old Russian Empire prior to the revolution, except for the loss of Finland, Latvia, Estonia, Lithuania, and Poland, which became independent countries after World War I (1914–18). During World War II (1939–45), the Soviet Union reoccupied parts of Finland, Estonia, Latvia, Lithuania, Poland, and Moldova and exercised extensive control over the foreign and immigration policies of the nominally independent countries of Poland, Czechoslovakia, Hungary, East Germany, and Romania. Finally, burdened by the ongoing expense of cold war conflict with the United States and internal rebellions throughout Eastern Europe, the Soviet Union collapsed in 1991, leaving 15 separate states, based largely on national boundaries prior to Russian occupation, each having its own annual immigration quota to the United States and Canada. The one important national difference was that each former Soviet socialist republic had a significant Russian population, descended mainly from bureaucrats and settlers deliberately placed by the Soviet government to facilitate control from the Russian capital of Moscow. 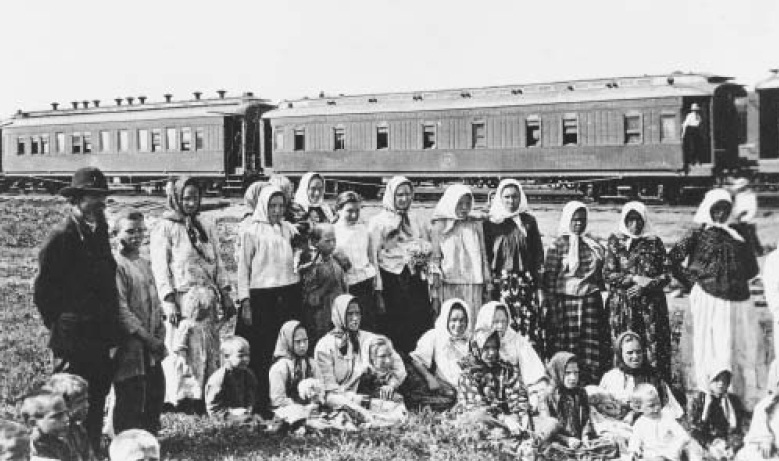 A group of Russian emigrants from Siberia, ca. 1910, stand near a train. Beginning in the 1870s, the more conservative elements of religious communal groups, such as the Mennonites and Doukhobors, tended to choose western Canada with its greater accommodation of their religious practices, while those seeking individual freedom and economic opportunity most often chose the prairies of the United States. (Library of Congress, Prints & Photographs Division)
Russians who first migrated eastward through Siberia to Alaska and the Pacific coasts of the United States and Canada during the late 18th century were mostly trappers, merchants, and colonial officials. The first permanent Russian settlement in Alaska was on Kodiak Island in the 1780s, and Russia, along with Great Britain and the United States, claimed the Pacific Northwest. Numbers of Russian settlers in North America were always small, however. In 1867, when Alaska was sold to the United States, fewer than 1,000 Russians lived in Alaska, but they had established a distinctive cultural presence in coastal regions. Prior to 1880, there was little Russian immigration to the United States.
Immigration from the Russian Empire during the late 19th and early 20th centuries, on the other hand, was massive—an estimated 3.2 million between 1881 and 1914—but included a relatively small proportion of ethnic Russians (fewer than 100,000). The czarist government practically forbade the immigration of the non-Jewish population, encouraging instead migration to the burgeoning industrial cities or to new farmlands in Siberia and the Russian Far East. About half of Russia’s immigrants were therefore Jews, and most of the rest were religious dissenters, including Old Believers, Mennonites (see Mennonite immigration) Doukhobors, and Molokans. Slavic peoples recently incorporated in the Russian Empire, including Poles, Belarusians, and Carpatho-Rusans; and the descendants of Germans who had homesteaded the southern farmlands of Russia during the 18th century. The vast majority of immigrants from the Russian Empire landed in New York City and settled there or in other industrial cities of the American North. The pacifist Molokans formed the only large migration of Russians to the West Coast of the United States, with about 5,000 immigrating to California between 1904 and 1912. Although there were about 20,000 Russian Molokans in the United States in 1970—most in Los Angeles and California—they were rapidly becoming acculturated. Canada especially courted communal agriculturalists from Russia by promoting group colonization. This led to the establishment of colonies by Mennonites in Saskatchewan (1870s), the Doukhobors in Saskatchewan (1890s), and the Molokans in Alberta (1920s). 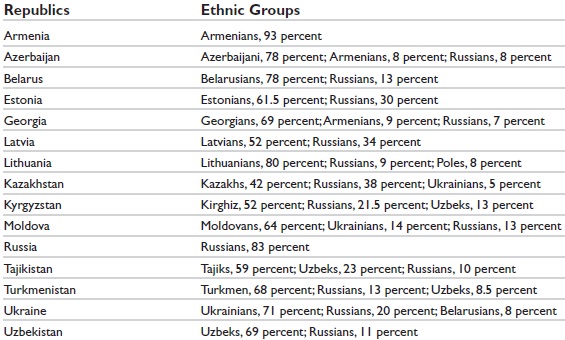 As a result of ethnic mixing across several centuries, immigration figures from lands once controlled by Russia are difficult to establish. There might be a significant Russian component in immigration from any of these 15 countries, though the majority of Russians today come from Russia itself.
After the Bolshevik Revolution, emigration under the Soviet Union (1917–91) was virtually halted, both because of even more stringent Soviet controls and because of suspicion of radical ideologies by U.S. and Canadian officials (see Soviet immigration). With the breakup of the Soviet Union in 1991, Russians were finally allowed to immigrate freely to the West. Almost a half million Soviets or former Soviets immigrated to the United States during the 1990s, probably about 15 percent of them ethnic Russians. The number of ethnic Russians immigrating continued to grow through the late 1990s, from 11,529 in 1998 to 20,413 in 2001. Of Canada’s 142,000 immigrants from the former Soviet Union (2001), 53 percent came between 1991 and 2001.
See also Estonian immigration; Hutterite immigration; Jewish immigration; Latvian immigration; Lithuanian immigration; Polish immigration; Ukrainian immigration.