The Statue of Liberty is the most visible symbol of the personal freedoms that attracted immigrants to American shores from the 17th century to the present day. Given to the people of the United States by France in 1884 as an expression of friendship, the statue commemorated French aid in the dark days of the American Revolution (1775–1783). Since then, it has greeted every immigrant entering New York Harbor, promising freedom and opportunity.
Liberty Enlightening the World, the official name of the sculpture, is more than 150 feet high, not including the pedestal or torch. The bronze statue displays liberty personified, proud and graceful, holding forth the torchlight of freedom. The seven spikes of her crown stand for the light of liberty shining on the seven seas and seven continents. A tablet bearing the date of the Declaration of Independence is cradled in her left hand, and the broken chain of tyranny lies at her feet. The statue was first proposed in 1865 by French politician Edouard-René Lefebvre de Laboulaye, who greatly admired the United States. During the 1870s, the design was entrusted to sculptor Frédéric-Auguste Bartholdi, who had visited New York City in 1871 and chosen Bedloe’s Island in upper New York Bay as a fitting site. While the French-American Union raised $400,000 for its construction, the American Committee, with the help of New York publisher Joseph Pulitzer, raised $300,000 to complete the pedestal. Designed to be the largest statue in modern times, the daunting task of engineering was given to Frenchman Alexandre-Gustave Eiffel, who later designed Paris’s Eiffel Tower. Bartholdi had originally hoped to present the statue on the centenary of America’s independence but settled for sending the right hand clasping the torch, which was displayed at the Centennial Exposition in Philadelphia and later in New York City. Liberty Enlightening the World was finally christened on October 28, 1886, with President Grover Cleveland in attendance.
The symbolism of the statue evolved across time. Between 1886 and 1920, the Statue of Liberty, as it was popularly called, came to represent not just friendship between two nations but their shared commitment to freedom. Immigrants eagerly lined the decks of ships as they entered New York Harbor to catch a glimpse of the towering bronze figure. Many cried with joy. In 1935, on his arrival from Poland, Nobel Prize–winning writer Isaac Bashevis Singer remembered hearing about the statue as a small boy in Warsaw. “They all wrote about it,” he recalled, “how they came to America, how they saw the Statue Liberty.” In 1903, a plaque inscribed with the final lines of “The New Colossus” was placed on the pedestal. Written by Jewish American poet Emma Lazarus, the poem embodies the ideals that drew immigrants to U.S. shores, as the “Mother of Exiles” eschews the “storied pomp” of ancient glories:
Give me your tired, your poor,
Your huddled masses yearning to breathe free,
The wretched refuse of your teeming shore.
Send these, the homeless, tempest-tost to me.
I lift my lamp beside the golden door!
During World War I (1914–18), the statue became a national symbol, used on recruiting posters and for selling Liberty Bonds. For many immigrants, American freedom meant economic freedom. One young Polish Jew remembered the thrill and emotion of seeing the statue in 1920: “It was more, not freedom from oppression, I think, but more freedom from want. That was the biggest thrill, to see that statue there.” For hundreds of thousands of refugees arriving after World War II (1939–45), however, the Statue of Liberty became synonymous with the “Mother of Exiles.”
In 1924, the Statue of Liberty was declared a national monument, and in 1933 its care was handed over to the National Park Service. In 1965, Ellis Island and Liberty Island were joined as the Statue of Liberty National Monument. 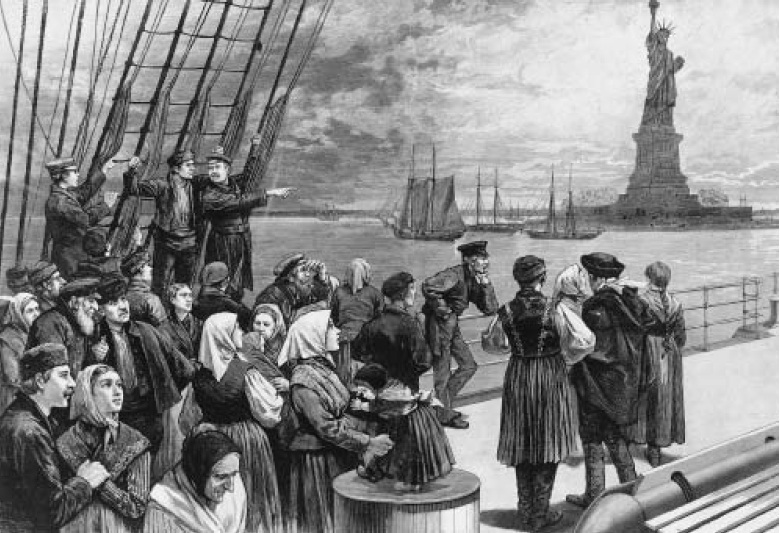 An ocean steamer passes the Statue of Liberty, as some steerage passengers enter New York Harbor. The hope in the eyes of the variously clad immigrants is evident. In practice, many immigrants missed the sight, nervously preparing their belongings for landing. (Library of Congress, Prints & Photographs Division)
Some 2 million people visited the Statue of Liberty each year until the terrorist attacks of September 11, 2001, led to its closing, officials citing security and safety issues as the reason. Liberty Island was reopened three months later, but visitors were not allowed to take the famous 354-step hike to the crown. The museum in the pedestal was reopened in summer 2004. The symbolism of the Statue of Liberty remains strong. According to New York City mayor Michael Bloomberg, as long as it remains closed “in some sense the terrorists have won.” Without dramatic improvements in security, however, officials still considered the statue “woefully unprotected” and the terrorist threat to the symbol of liberty real.