Though Swedes settled in North America as early as 1638, the great period of Swedish migration was between 1870 and 1914. According to the U.S. census of 2000 and the Canadian census of 2001, 3,998,310 Americans and 282,760 Canadians claimed Swedish descent. Although the absolute numbers are small compared to other European countries, Sweden ranked third, only behind Ireland and Norway, in percentage of population to emigrate during the 19th century. Although Chicago quickly grew to have the second largest Swedish population in the world during the 19th century, the 20th century led to rapid assimilation and considerable dispersion. The greatest concentrations of Swedes are in the American Midwest and the Canadian provinces of British Columbia and Alberta.
Sweden occupies 158,700 square miles on the Scandinavian Peninsula in northern Europe. It is bordered by Norway to the west, Denmark to the south (across the Kattegat), and Finland to the east. In 2002, the population was estimated at 8,875,053. Most people are ethnic Swedes (89 percent), with a small Finnish minority (2 percent), and a significant number of guest workers from many countries. The chief religion is Evangelical Lutheran. The Swedes have lived in the region for at least 5,000 years, about as long as any European people. Gothic tribes from Sweden played a major role in the destruction of the Roman Empire. Other Swedes, commonly known as Vikings, helped create the first Russian state in the ninth century. As its state structure grew, Sweden conquered the Finns during the 12th century and united with Norway and Denmark in the 14th. In 1523, Sweden broke away from the union and emerged by the mid-17th century as the greatest power in northern Europe. The country declined in international prominence after its defeat by Russia in the Second Northern War, early in the 18th century. Sweden and Norway were again united between 1814 and 1905 before Norway declared its full independence. During the 20th century, Sweden has had a reputation for noninvolvement in international affairs, remaining neutral in both world wars. It entered the European Union in 1995.
In 1638, Sweden established a settlement along the Delaware River Valley, christening it New Sweden. The commercial enterprise never flourished, however, and by 1655, its 400 Swedish and Finnish settlers fell under the control of the Dutch colony of New Netherland to the north (see Delaware colony; New York colony). Most Swedish immigrants came to the United States in three waves. Though Swedes were influenced by nationalism and religious freedom, overpopulation and the resulting lack of economic opportunity were by far the greatest cause of the mass immigration. Beginning in 1840, most emigrants were from the university towns of Uppsala and Lund. Most were young and from good social backgrounds and often influenced by romantic ideals. Gradually this migration gave way to that of various persecuted religious groups or associations, including the Janssonists, Baptists, and Mormons. Neither of these migrations was large, but both established foundations for later, larger migrations. As railways and steamships improved in the 1860s, mass emigration became common. A severe famine in the late 1860s gave impetus to the emigration trend, leading about 100,000 Swedes to go to the United States between 1868 and 1873. In some Swedish districts, virtually every farm was represented in America, providing a social framework for prospective immigrants. Between 1870 and 1914, about 1 million Swedes immigrated to the United States, and about 100,000 more during the postwar period up to the Great Depression in the 1930s. Although Swedish immigration revived somewhat after World War II (1939–45)—more than 45,000 until 1970— it declined thereafter and remained small throughout the remainder of the 20th century. Between 1970 and 2000, Swedish immigration to the United States averaged about 1,000 per year. 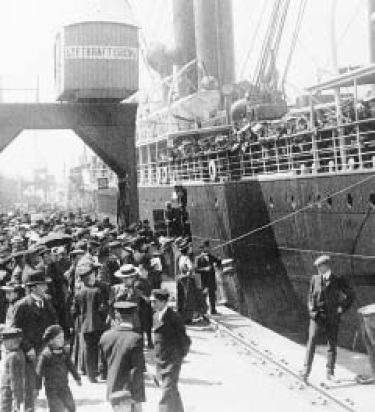 Swedish emigrants bound for England and the United States board steamer at Göteborg, Sweden, ca. 1905. Most Swedes initially came to America for land, though it was increasingly difficult to find after 1900.Within a decade, more than half of all Swedes were city dwellers, with Chicago becoming second only to Stockholm in Swedish population. (Library of Congress, Prints & Photographs Division)
The first significant migration of Swedes to Canada began after 1890. Heavy promotion by the Canadian government, completion of the transcontinental railway in 1885, and declining availability of homesteads in the United States led an increasing number of Swedes to look for agricultural opportunities on the Canadian prairies. Figures prior to World War I (1914–18) are problematic, as Swedes were often enumerated with Norwegians or Scandinavians generally, and if they migrated north directly from the United States, they would have been listed as Americans. A reasonable estimate for the Swedish immigration between 1893 and 1914 is about 40,000. About 11,000 more came directly from Sweden during the 1920s, but immigration virtually halted during the depression and war years. The earliest Swedish settlements were concentrated in Manitoba, but by the 1920s, the greatest numbers of Swedes were living in Saskatchewan. After World War II, a generally healthy economy and extensive social services kept many Swedes from emigrating. In 2001, there were only 6,810 Swedish immigrants living in Canada, and 36 percent of them had come before 1961.