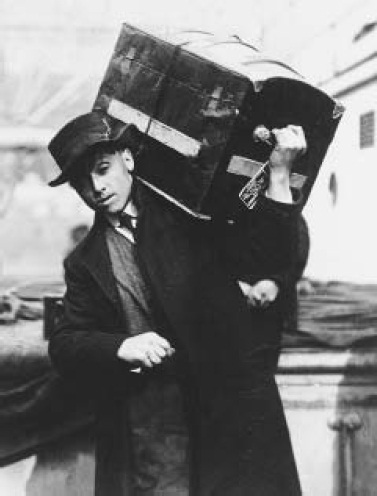 A Polish emigrant embarks for America. Acute poverty and cultural repression drove Poles to seek opportunity in the United States. More than 1 million immigrated to America between 1880 and 1914. (Library of Congress, Prints & Photographs Division)
The next major shift in American immigration policy came with passage of the Immigration and Nationality Act of 1965. The Civil Rights movement of the 1960s led to a rethinking of the quota system, and the new measure replaced nationality quotas with hemispheric ceilings— 170,000 annually from the Eastern Hemisphere and 120,000 annually from the Western Hemisphere—with preference for relatives of U.S. citizens and permanent resident aliens. Immediate family members of citizens could enter without being counted against the quota. As the number of immigrants from Europe began to shrink, however, Asian and Latin American immigration increased. In 1978, Congress replaced the hemispheric arrangement with a single annual quota of 290,000. By the 1980s, almost 50 percent of immigrants came from Mexico, Central America, South America, and the Caribbean, while 37 percent arrived from Asia. Immigration from Europe and Canada declined to only 13 percent of the total.
Two factors in the 1990s led to a growing anti-immigrant attitude in the United States. In 1992, 1.1 million immigrants entered the country, the largest number since 1907, when immigration was virtually unrestricted. As a result, by 1997 nearly 10 percent of the American population was foreign born, almost double the percentage from 1970. Also, an economic downturn in the mid-1990s caused an increasing number of Americans both to fear for their jobs and to become active in opposing expensive government measures providing for the economic and social welfare of immigrants. In California, where one-third of all foreignborn Americans lived, voters ignored previous U.S. Supreme Court decisions protecting immigrants’ rights as a group to pass Proposition 187, denying education, welfare benefits, and nonemergency health care to illegal immigrants. Federal judges killed enactment of its provisions, but there continued to be a strong national movement to impose tighter restrictions on immigration and to enforce immigration laws more vigorously. In 1993, President Bill Clinton surprised supporters by continuing outgoing president George H.W. Bush’s policy of forcibly returning Haitian refugees intercepted on the high seas, approved expedited hearings for asylum seekers, and sought an additional $172.5 million for the Immigration and Naturalization Service (INS) to fight illegal immigration. This led to a series of decisions speeding the deportation process, reducing automatic admission of certain immigrant groups, and limiting the importation of foreign workers. In 1996, a presidential election year, a bill was enacted providing $12 million for construction of a 14-mile fence south of San Diego, California, a substantial increase in the number of Border Patrol and INS agents, and a mandatory three-year prison sentence for smuggling illegal aliens. The Welfare Reform Act (1996) also stopped welfare benefits to hundreds of thousands of legal immigrants. One of the few exceptions to the trend toward tighter restrictions was a decision by the INS in 1995 to grant asylum to women fleeing their homelands in fear of rape or beatings, prompted by state-sponsored terror against Bosnian women by Serb troops. While the challenges afforded by 13 million new immigrants between 1990 and 2002 led some to question the wisdom of continuing to accept new residents at such a rate, the debate was largely a reprise of the issues raised in the 1850s and the 1910s in the midst of two other great waves of immigration.
At the beginning of the 21st century, the presidency of George W. Bush saw two major initiatives with large implications for immigration policy. The first of these, designed to gain greater control over the immigration process, was the result of the terrorist attacks on New York City and Washington, D.C., on September 11, 2001. Almost immediately the administration proposed a series of sweeping measures designed to combat terrorism, including strengthened border controls. The Uniting and Strengthening America by Providing Appropriate Tools Required to Intercept and Obstruct Terrorism Act (better known as the USA PATRIOT ACT) was quickly passed and signed into law by Bush on October 26, 2001. The act provided for greater surveillance of aliens and increasing the power of the attorney general to identify, arrest, and deport suspected terrorists. The resulting evaluation of the nation’s security measures led to an extensive overhaul of the immigration service. The Homeland Security Act on November 25, 2002, abolished the INS, transferring its functions to various agencies within the newly created Department of Homeland Security. Immigration services formerly provided by the INS were transferred to U.S. Citizenship and Immigration Services; enforcement oversight, to the Border Transportation Security Directorate; border control, to the U.S. Customs and Border Protection; and interior enforcement, to the U.S. Immigration and Customs Enforcement.
The second of these initiatives was Bush’s determination to work in conjunction with Mexican president Vicente Fox to regularize the participation of Mexican laborers in the U.S. economy. Though negotiations were temporarily delayed in the wake of September 11, on January 7, 2004, Bush proposed the Temporary Worker Program, which would “match willing foreign workers with willing American employers, when no Americans can be found to fill the jobs.” More controversially, it would provide temporary workers with legal status, even if they were undocumented. Critics voiced concerns that it did not provide a path to citizenship for those workers. With regard to the desirability of widespread immigration, the first decade of the 21st century proved to be as contentious as the last decade of the previous century.