By defeating Mexico in the U.S.-Mexican War (1846–48), the United States added virtually all of the present American Southwest to the Union, together with some 100,000 Mexican citizens. This annexation assured a permanent and substantial non-European population in the expanding republic and further added to the cultural diversity that marked the development of the country.
The war began as a dispute over Texas (see Republic of Texas). In 1823, after Mexico had gained its independence from Spain, it encouraged Americans to settle its sparsely populated northern province of Texas, allowing them to become Mexican citizens on condition of learning Spanish and converting to Catholicism. Many came— 30,000 by the mid-1830s—but few took the conditions seriously. In 1836, the Anglo-Mexicans successfully rebelled and established the independent Republic of Texas. In 1845, the U.S. government agreed to annex the young republic but inherited a dispute over the Texas-Mexican border dating back to 1836. President James K. Polk attempted to purchase northern Mexican lands to the Pacific Ocean, including Texas but was rebuffed by Mexican authorities. Polk ordered General Zachary Taylor to occupy territory as far south as the Rio Grande, the southernmost extent of Texan claims, which precipitated a Mexican attack in May 1846. The better-armed and more professional American troops routed the Mexican army in northern Mexico, securing the region by February 1847. Polk also ordered a force under General Stephen Kearney to move against the lightly populated northwestern regions of New Mexico and California, which were secured with little loss of life. In 1847, General Winfield Scott landed an army at the Mexican port Veracruz and won a decisive victory against General Antonio López de Santa Anna at Cerro Gordo on April 18, 1847. This opened the path to Mexico City, which was subdued on September 13 with the storming of Chapultepec Castle by U.S. troops under the command of Brigadier General John Quitman. 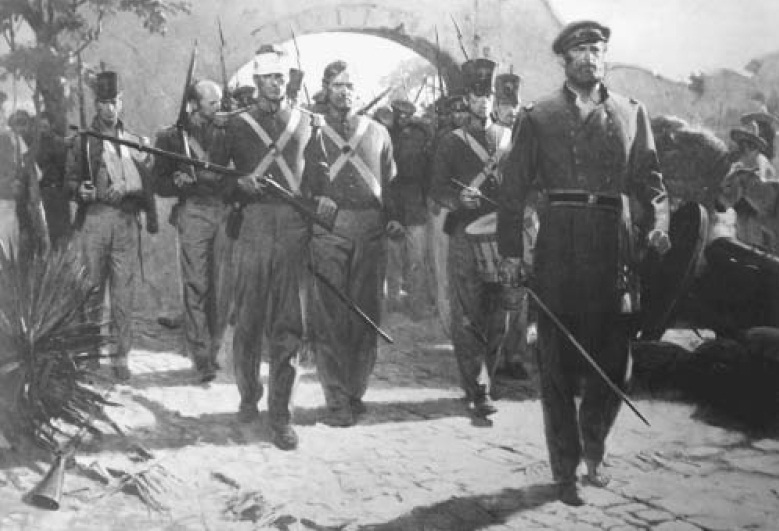 General Quitman (depicted at right) enters Mexico City with a battalion of marines, September 1847. (National Archives / DOD,War & Conflict)
By the Treaty of Guadalupe Hidalgo (February 2, 1848), territory making up the modern states of California, Nevada, and Utah, and parts of Arizona, New Mexico, Colorado, and Wyoming was ceded to the United States in return for $15 million. The Rio Grande was established as the southern border between the two countries. The treaty also provided that all Mexican citizens living in transferred territory could continue residence and maintain full rights of property. Within one year, they could elect to maintain Mexican citizenship; otherwise, they would automatically become U.S. citizens. Most of the inhabitants remained in the region as American citizens. Although Mexican property rights were nominally protected, a vast influx of settlers following the California gold rush undermined their political power, while taxes and court costs led to the progressive selling off of land by Mexican Americans. By the 1880s, most of the large Mexican estates in the American Southwest had fallen into the hands of American landowners, and the economically diverse Mexican society that had existed there was reduced to one of largely unskilled and semi-skilled labor. New Mexico, with its majority Mexican population until the 1940s, was a partial exception to this trend. The Gadsden Purchase of 1853 completed reconciliation of the border between the two countries.