There were virtually no Vietnamese in North America prior to the Vietnam War (1964–75). Decades of war and crises drove hundreds of thousands of them into exile, however, creating one of the largest refugee communities in North America. In the U.S. census of 2000 and the Canadian census of 2001, 1,223,736 Americans and 151,410 Canadians claimed Vietnamese descent. Vietnamese refugees were resettled widely throughout the United States; nevertheless, there are large ethnic concentrations, particularly in the greater Los Angeles area and in San Francisco, in California, and in Houston, Texas. In Canada, Toronto, Montreal, and Vancouver all have large Vietnamese populations.
Vietnam occupies 125,500 square miles in Southeast Asia on the east coast of the peninsula of Indochina. It is bordered on the north by China and on the west by Laos and Cambodia. In 2002, the population was estimated at 79,939,014. Ethnic Vietnamese compose 85–90 percent of the population and Chinese about 3 percent, though the latter figure was much higher prior to the Vietnam War. There are also small numbers of Hmong, Tai, Meo, Khmer, Man, and Cham peoples. The main religions are Buddhism, Taoism, and Roman Catholicism. Nam Viet, the first highly organized kingdom in Vietnam, emerged around 200 B.C. in the north. It was conquered by China in the first century B.C., beginning a pattern of Chinese influence in Vietnam, particularly during times of international strength. In the 10th century, Annam (northern Vietnam) regained its independence, though not without future invasions and interference from China. In 1471, Annam conquered Champa to the south, a kingdom with both Buddhist and Hindu influences. From the 11th through the 17th centuries, there was a continual struggle between the various peoples of modern Vietnam, Laos, Cambodia, Burma, and Thailand for preeminence and the definition of borders, punctuated by Chinese incursions from the north. From the 17th century on, European involvement grew. France captured Saigon in 1859 and gradually gained control of Vietnam, Laos, and Cambodia. A strong independence movement developed during the 1920s. When Vietnam was returned to French control in 1945 following World War II (1939–45), guerrilla warfare erupted, leading to French defeat and withdrawal in 1954. At the Geneva Convention of that year, the region was divided into three countries—Vietnam, Laos, and Cambodia—with Vietnam temporarily divided until elections could be held. Instead, South Vietnam declared its independence, and the Communist Democratic Republic of Vietnam was established in the north. The activities of Communist infiltrators in the south—the Viet Cong—led to U.S. intervention on behalf of an ineffective South Vietnamese government in the early 1960s as part of a cold war policy to contain the spread of communism. By 1968, a half million American troops were bogged down in a war of attrition, commanding the battlefields but unable to root out the guerrillas. After prolonged negotiations, a peace accord was reached in 1973, and the United States withdrew in 1975, leading to a massive exodus on the part of those who had since the 1950s aided the French or the Americans or who feared the imposition of a communist government. Vietnam had ongoing diplomatic and border conflicts with Cambodia and China following the Vietnam War. By the 1990s, the country’s government became more liberal, allowing resumption of international travel and a gradual reintegration into the world economy. In 1995, Vietnam and the United States reestablished formal diplomatic ties. 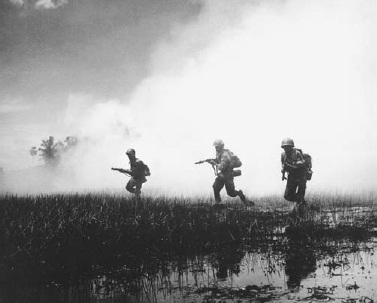 Vietnamese troops in action, 1961: The protracted conflict and eventual U.S. withdrawal in 1975 left hundreds of thousands of South Vietnamese collaborators at the mercy of the new Communist government. Between 1975 and 1977, approximately 175,000 Vietnamese refugees settled in the United States. (National Archives / DOD,War & Conflict)
There were virtually no Vietnamese in North America prior to the 1950s, though a few came escaping the turmoil of the French departure and civil war. The first significant migration came with the U.S. withdrawal in 1975, when about 125,000 Vietnamese were brought to the United States. These included most of the government and highranking military figures, and their families. It is estimated that among heads of household in this group, more than 30 percent were trained in professional or management areas, though few were prepared for the sudden transition. Six camps were established across the United States to help process and resettle the refugees. After medical examinations and interviews, each was assigned to one of nine voluntary agencies (VOLAGs) that assumed responsibility for locating sponsors who would support families for up to two years. Initially, Vietnamese families were placed throughout the United States in an attempt to distribute the financial burden across the states. The most successful resettlements, however, proved to be in southern California, where an established Asian culture base already existed, including some Southeast Asians. Gradually, the refugees migrated toward the west, creating large Vietnamese enclaves in Orange County and Los Angeles County, California. By 1976, more than 20 percent of the refugees lived in California.
The second major wave of immigration came between 1975 and the early 1980s, when those who had not been evacuated with the help of the U.S. government took to the seas in every conceivable kind of craft, many profoundly unseaworthy. They became the “boat people.” Two-thirds were attacked at sea, usually more than once, and the refugees robbed and often raped, before finally landing in Thailand, Indonesia, or Malaysia. At first, the number of fleeing refugees was small but picked up dramatically in 1979 when Vietnam went to war with both Cambodia and China. The Chinese ethnic minorities of Vietnam, about 7 percent of the population, were especially vulnerable. Of almost 250,000 boat people who arrived in the United States, about 40 percent were ethnic Chinese. Vietnamese immigration peaked in 1980 (95,200) and 1981 (86,100). Unlike the first wave, which contained many of Vietnam’s best-educated people, the boat people were among the poorest and least educated of any peoples to arrive in the United States after World War II (1939–45). They were assigned to VOLAGs, but in advance of their arrival, rather than afterward. The process of concentration, clearly established by 1976, continued. By 1984, more than 40 percent of Vietnamese refugees lived in California, and by 1990, about half lived there. About 11 percent lived in Texas.
In 1979, the United Nations helped establish the Orderly Departure Program (ODP), which enabled many future Vietnamese immigrants to leave Vietnam legally. The program required potential immigrants to get approval from both the Vietnamese and U.S. governments and was designed particularly to aid former South Vietnamese soldiers and the Amerasian children, about 8,000, produced as a result of the long interaction of American troops with the native population. Eventually, about 50,000 Vietnamese came under the ODP before the program was discontinued in 1987. By the mid-1980s, the Vietnamese population in the United States was more than 650,000. Though the economy gradually improved in Vietnam, immigration to the United States remained strong, averaging about 40,000 per year between 1988 and 2002.
Roman Catholic religious students were the first Vietnamese to come to Canada. Beginning in 1950, a handful of students were given grants to study at Canadian universities. Given Vietnam’s French colonial background, most preferred to attend universities in French-speaking Quebec. When France cut diplomatic ties with the government in Saigon in 1965, there was a new surge of interest in Canadian universities, leading to the development of small Vietnamese enclaves in Montreal, Quebec City, Sherbrooke, Ottawa, Moncton, and Toronto. Many stayed on as professionals after their training.
By 1974, there were about 1,500 Vietnamese in Canada, most living in Quebec. Canada played a major role in the resettlement of Vietnamese refugees, admitting more than 141,000 between 1975 and 1991. During the first Vietnamese migration after the U.S. withdrawal in 1975, Canada resettled about 5,600 refugees (1975–76). Between 1978 and 1981, about 50,000 boat people were admitted, and about 80,000 more in a continuous migration between 1982 and 1991. Almost two-thirds of the first wave, who tended to be well educated and often spoke French, settled in Quebec. After 1978, however, the refugees were more evenly distributed, with 40 percent going to Ontario, and 17 percent to Quebec. After 1991, the numbers declined somewhat. Of the 148,405 Vietnamese immigrants living in Canada in 2001, only 855 arrived before 1971 and about 41,000 between 1991 and 2001.