Post–World War I (1914–18) ethnic tensions, economic conditions, and the fear of bolshevism all contributed to the Winnipeg general strike of May 15 to June 28, 1919. Although the strike was primarily about labor issues and enjoyed widespread support from Anglo-Canadian workers and recently returned veterans, it was portrayed by city leaders as the first step in a wave of foreign bolshevism.
Winnipeg was clearly divided between Anglo-Saxon white-collar workers in the south and west of the city and continental laborers in the north. In March 1919, the One Big Union (OBU) was formed with the goal of worker control over primary industries. Foreign mine workers were especially vocal, with most chapters of the United Mine Workers of America joining the OBU. Socialist activities were on the rise throughout western Canada and were being carefully monitored by the government. The great influenza epidemic of 1918–19 hit the immigrant community of Winnipeg particularly hard, thus further heightening tensions. 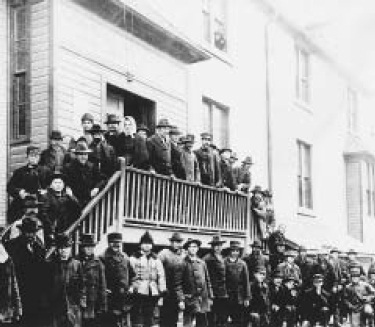 This photo shows Immigration Hall, Winnipeg, Manitoba, ca. 1900. Winnipeg’s population grew more than 200 percent during the first decade of the 20th century, largely as a result of immigration.The Red Scare in the wake of the Bolshevik Revolution in Russia and economic hard times led to a general strike in 1919. (National Archives of Canada)
After the breakdown of labor negotiations between management and the Metal Trades Council, the Winnipeg Trades and Labor Council called a general strike for May 15. More than 30,000 workers responded. Anglo-Canadian laborers were caught in the middle of a conflict between the Anglo-Canadian business community, which was determined to preserve a “Canadian” way of life on the prairie, and the demands of those who were seeking concessions for workers. As sympathy strikes were called in other western cities, the OBU attempted to create a national movement. As rumors of a national rail strike spread, the dominion government intervened and invoked a strict interpretation of Article 41 of the Immigration Act, which enabled them to deport “anarchists and Bolsheviks” or anyone teaching “unlawful destruction of property.” Eventually more than 100 deportations were authorized, though not all were carried out. Of the 10 strike leaders in Winnipeg, six were Anglo-Canadian. Following the strike, the criminal code was amended, broadening the definition of sedition, raising penalties from two to a maximum of 20 years, and outlawing any institution that advocated the use of force to bring about political or economic change.
See also labor organization and immigration; terrorism and immigration.