As Puritan leader and first governor of Massachusetts Bay (see Massachusetts colony), John Winthrop played a fundamental role in establishing both the Puritan cultural ethos that characterized the leading English colonists in America and England’s actual political control of the Atlantic seaboard. In less than two decades, the Great Migration that he led transformed New England from a New World wilderness to a thriving outpost of English settlement.
Born in 1588 in Suffolk, England, to a prosperous landowner, Winthrop as a young man adopted strong Puritan views. He studied law at Gray’s Inn and in 1617 was appointed justice of the peace in Suffolk. During the 1620s he developed a thriving law practice in London. In 1629, Winthrop lost his lucrative position as attorney in the royal Court of Wards and Liveries, as Charles I (r. 1625–49) began to remove Puritan influence from the government. Concern over England’s growing anti-Puritanism, moral laxity, and weak economy led Winthrop to join with substantial merchants and landowners of the Massachusetts Bay Company. Agreeing to organize the migration to America, he was elected governor of the colony. He set off for North America in 1630 along with 400 other Puritans. Within the first year, 70 percent of the settlers had either died or returned to England. By the following year, however, the colony was firmly established under Winthrop’s leadership, and he served intermittently as governor throughout his life (1630–33, 1637–39, 1642, 1646–48). At the time of his death, there were 15,000 inhabitants of the colony. 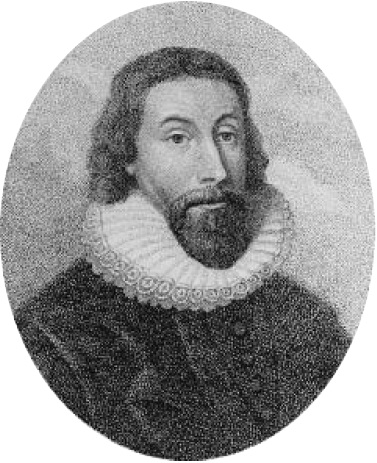 John Winthrop was elected governor of the Massachusetts Bay colony 12 times following its establishment in 1630. He helped establish a sense of mission in early English settlers, encouraging them to develop model communities that others might look upon favorably as a moral example. (Library of Congress, Prints & Photographs Division)
Winthrop was stern and single-minded but not an extremist. His vision for the new colony had been laid out in a sermon on shipboard during the initial voyage from England, when he argued for creation of a model community, or “city upon a hill,” a people in covenant with God, with full citizenship reserved for members of a reformed Church of England (later known as the Congregational Church). Careful to guard the colony against theological error, he led the Massachusetts Bay colony to banish Anne Hutchison, Roger Williams, and John Wheelwright, among others. His son, John, became governor of the Connecticut colony.