The disintegration of the Yugoslav state in 1991 led to persistent ethnic violence and two major conflicts in Bosnia- Herzegovina and in Kosovo. As a result, emigration from the region rose dramatically during the 1990s, changing the character of the South Slavic communities in North America. According to the U.S. census of 2000 and the Canadian census of 2001, almost 1 million Americans and 300,000 Canadians claim descent from one of the ethnic groups of Yugoslavia: Albanians (Kosovars), Bosnian Muslims (Bosniaks), Gypsies (Roma or Romanies), Montenegrins, Croats, Serbs, Slovenians, or Macedonians (see Albanian immigration; Bosnian immigration; Croatian immigration; Gypsy immigration; Macedonian immigration; Serbian immigration; Slovenian immigration). Because they came from many groups and were often resettled as refugees, former Yugoslav citizens settled in a wide variety of locations throughout North America. 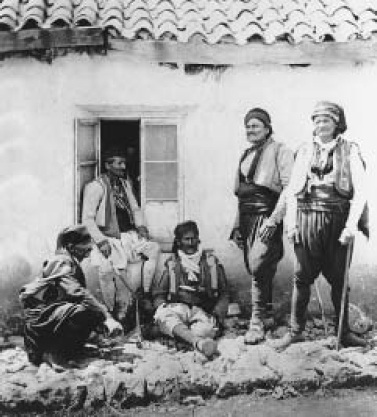 A group of Montenegrins, ca. 1855. Closely related to the Serbs, most Montenegrins emigrated from the poverty of their mountainous country before 1911. (Library of Congress, Prints & Photographs Division)

Yugoslavia occupied 98,766 square miles on the Balkan Peninsula in southeast Europe and was bordered by Italy, Austria, Hungary, and Romania on the north; Bulgaria on the east; and Albania and Greece on the south. Slavic peoples moved into the area from modern Poland and Russia in the sixth century, gradually developing their own kingdoms but maintaining similar languages and a distinctive cultural heritage that set them apart from the Greeks, Germans, Magyars, Albanians, and Romanians who surrounded them. By the 15th century, however, all the various South Slavic peoples had been conquered—the Slovenians by Austria, the Croats by Hungary and Venice, and the Serbs, Bosnians, Macedonians, and Montenegrins by the Ottoman Empire. These peoples were moved by the nationalist movements of the 19th century, and Serbia proved strong enough, with the support of some European powers, to gain its independence from the Ottomans in 1878. During the early 20th century, the pan-Slavic movement grew under Serbian leadership, seeking to reforge the old Slavic affinities from the past. The defeat of the Austro-Hungarian and Ottoman Empires in World War I (1914–18) required the redrawing of state boundaries and led directly to the creation of the first union of the South Slavs, the Kingdom of the Serbs, Croats, and Slovenes.

The kingdom was created in 1918 and renamed Yugoslavia in 1929. The core of the new state was Serbia, whose peoples formed the largest of the Slavic populations. Joined to Serbia were Croatia, Slovenia, Bosnia-Herzegovina, Montenegro, and Macedonia. It was hoped that the common Slavic heritage of the six main groups would be stronger than their differences. From the first, however, the Croats and Slovenes were suspicious of Serbian control over the state; their fears were confirmed by Serbian king Alexander I’s assumption of dictatorial powers in 1929. There was some emigration from the new state especially as a result of the displacements of World War I (see World War I and immigration), but figures remained low. Between 1920 and 1950, fewer than 60,000 Yugoslav citizens of all nationalities immigrated to the United States, more than 80 percent of them before the mid-1920s when restrictive legislation all but halted immigration by Slavs. During World War II (1939–45), Croatia established its own state allied to Nazi Germany, but it was brought back into Yugoslavia under the authoritarian rule of the Communist leader Josip Broz, Marshal Tito (1945–80).

During the 1980s, a rotating presidency was established in Yugoslavia in an attempt to quell ethnic unrest. With a growing economic crisis and rising national aspirations, the country splintered in 1991. Slovenia, Croatia, Bosnia- Herzegovina, and Macedonia declared their independence during 1991 and 1992 and moved toward democratic regimes, while Serbia and Montenegro, retaining the name Yugoslavia, controlled the military and continued under Communist rule. This led to a decade of bitter ethnic fighting. Serbs attacked Croatia and Bosnia (1991–95), hoping to preserve rule for the minority Serbs in those regions and attempted to kill all ethnic Albanians or drive them from Yugoslavia’s southern province of Kosovo (1998–99). More than 2.5 million refugees were created by the fighting in Bosnia and Kosovo, which led to a massive surge in North American immigration. Between 1991 and 2002, almost 120,000 immigrants of all ethnic groups came to the United States from the former Yugoslavia, most fleeing the ethnic conflicts. Of Canada’s 145,380 immigrants from the former Yugoslavia in 2001, about 46 percent came after 1990, the majority from modern Serbia, Montenegro, and Bosnia and Herzegovina.

At the time of its dissolution in 1991, the population of Yugoslavia was about 24 million, divided among eight major ethnoreligious groups. Croats, Slovenes, Bosnians, Serbs, Montenegrins, and Macedonians enjoyed some local representation within the Yugoslav state; the Hungarians in the Vojvodina and Albanians in Kosovo were governed directly as part of Serbia. Gypsies formed small minorities throughout Yugoslavia and were almost universally discriminated against. In 2003, the reduced Yugoslavia was restructured into a loose federation of two republics and officially renamed Serbia and Montenegro. Its population was estimated at 10,677,290 in 2002, with the people still ethnically divided between Serbs (63 percent), Albanians (14 percent), and Montenegrins (6 percent). Hungarians, Muslims of various groups, and mixed ethnicities each composed between 3 and 4 percent of the population. Sixty-five percent were Orthodox; 19 percent, Muslim; and 4 percent, Roman Catholic.