Significance: The unique circumstances arising from the manner in which the vast majority of African Americans came to the Western Hemisphere and the question of whether African Americans should be considered an immigrant group in the strict sense of the term have contributed substantially to the overarching debate over the role of race in American society. Adding to whatever racial tensions might have arisen among African Americans and certain immigrant groups, resentment has been manifested in some quarters over perceived preferment of newcomers over the long-established African American population.
Over the general, long-term perspective on history, the relationship between African Americans and other immigrant groups to the United States has revolved around mutual suspicion and competition. This aura of suspicion and competition has been heavily overlain and exacerbated by the racial issues that had already been set in place during the early colonial era. During the early seventeenth century, the few Africans who were transported to colonial Virginia, Maryland, and New England colonies held the status of indentured servants. Chattel slavery similar to that already in place in Spanish and Portuguese America had yet to secure legal status in the North American colonies. However, events moved rapidly. Spurred by concerns about the long-term stability of the system of indentured servitude and questions of interracial marriage and sexual unions, the various English colonial governments put into place legalized systems of permanent, racially based chattel slavery.
Massachusetts was the first North American colony to institute slavery on the Latin American model. However, it was in Virginia in 1661 that the southern slavery model, which would persist to 1865, was set in place. By the end of the seventeenth century a legal and social code of separating the “black” and “white” races was firmly fixed. This system of racial separation endured, in its various permutations, into the late 1960’s. As it would prove, this was to be the general rule whether or not these “whites” were long-established, and mainly of English stock; or part of subsequent waves of immigration from Ireland, Scandinavia, or central, southern, or eastern Europe. When society was defined in racial terms, all white persons, regardless of their condition in society, could look upon themselves as “preferred” over all African Americans.

Communities of free African Americans existed from early colonial times. However, because of the growing incompatibility of the chattel slavery system outside the South, they flourished to a far greater degree in the northern colonies and states, particularly in the more vibrant economic climate of northern urban centers. As a distinctly identifiable and socially denigrated minority, African Americans invariably competed with newly arrived white immigrants for the lowest-paying jobs. With substantial white immigrant communities in nearly every major center by the 1860’s and increasing numbers of African American slaves escaping into the North on the Underground Railroad, relations between black and white communities grew more tense. 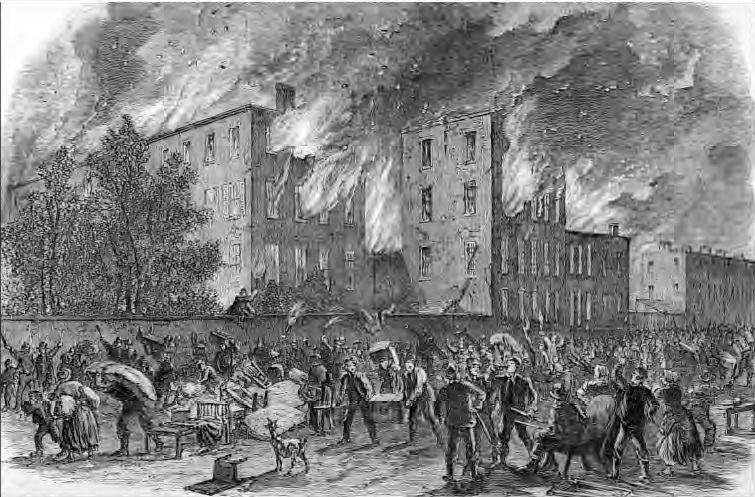 Harper’s Weekly illustration of the burning of New York City’s African American orphan asylum during the 1863 draft riots.
The U.S. Civil War (1861-1865) was resented by many white northerners as being waged to eliminate slavery. These people feared the prospect of a tidal wave of freed black slaves coming north from southern plantations to threaten the livelihood of poor whites. In 1863. the first military conscription in the United States brought this resentment to fever pitch, as lower-class whiles saw themselves as being compelled to participate in a struggle to free black slaves that would work against their own interests.
In New York City, this resentment sparked a series of events that culminated in a bloody draft riot. In July. 1863, a motley group white of protesters, among whom German and Irish immigrant laborers were prominent, rapidly degenerated into a mob and began a rampage of vandalism, arson, assault, and murder. Over a four-day period, they burned down an orphanage for black children and relentlessly brutalized African Americans, as many as two thousand of whom may have lied the city seeking safely.

The great New York City draft riot, notorious and horrific in its scope as it was. set the tune for subsequent northern and midwestern riots against African Americans. This ongoing violence was partially fueled by the anxieties and feelings of insecurity on the part of white immigrant groups. Anti-African American sentiment among while immigrants grew after the Civil War and during the early twentieth century. Meanwhile, during the first three decades of the new century, a movement that became known as the Great Migration saw the movement of many thousands of African Americans from the South to the North, where the) sought employment in urban centers. The same years also saw a massive influx of European immigrants into the United States.
As Jim Crow segregation systems became more rigid throughout the South and economic conditions there generally worsened, African Americans sought comparative freedom and better employment opportunities in northern cities, in which they formed ethnic enclaves. New York City\'s Harlem and Boston\'s Roxbury became two of the largest and best known of such communities. As black southerners were moving north, large numbers of eastern and southern Europeans were entering the United States, enlarging or creating their own ethnic enclaves. They were also coming into competition—at times violently—with African Americans for jobs. Interactions between Jews and African Americans were more ambiguous because of the existence of small but vocal groups within both communities harboring attitudes of racial exclusivity and religious anti-Semitism.
The decade of the 1960’s witnessed both the ebbing of the old immigration patterns and the crest of the Civil Rights movement. Although African Americans made major political and economic strides as a result of the successes of the Civil Rights movement, their very success engendered a new consciousness among members of other minority groups, particularly Asian Americans. Through the ensuing decades, the numbers of Asian Americans were considerably augmented by refugees from military conflicts in Vietnam, Cambodia, and Laos. However, the great rise in Latin American immigration would prove to have the greatest impact on African Americans.

By the last decades of the twentieth century, American Latinos and Latin American immigrants—who are often collectively known as Hispanics—combined to overtake African Americans as the largest ethnic minority category in the United States. However, Latinos comprise people from many highly disparate nationalities, including Puerto Ricans, Cuban Americans, Mexican Americans, and other groups with roots in Central America, South American, and the Caribbean. To complicate their relationship with African Americans even further, many Latin groups contain strong black elements. Consequently, there has been measurable outreach between African Americans and Latinos. Some African American community and legislative leaders have joined with Hispanic leaders to support liberalized immigration policies. Many educational institutions, especially historically black colleges, have actively recruited students from Hispanic communities.
Despite increasing African American cooperation with Hispanics, the major American political parties have tended to treat Hispanics and African Americans as separate and distinct voting blocs. For example, the Republican Party heavily courted Hispanic voters during the 2000 and 2004 national elections, and a modest outreach initiative by the George W. Bush administration to enlist greater African American support was stymied by the handling of the Hurricane Katrina disaster in New Orleans. What was perceived as a belated and inadequate response by the Bush administration was roundly criticized.
A question generating great differences of opinion has been what the impact of increasing Hispanic immigration—both legal and illegal—might have on already high unemployment rates within the African American community. Moreover, as African Americans have seen many Hispanics reach higher levels than most African Americans, black resentment has grown over the possibility that favoritism has been shown to the newer arrivals. However, there is no evidence that disparities between black and Hispanic incomes are any more than a perception.
Raymond Pierre Hylton
Further Reading
Chang, Iris. The Chinese in America: A Narrative History. New York: Viking Penguin, 2003. Though this book is mainly about Chinese Americans, it often offers comments on African Americans that present interesting juxtapositions of the historical interplay of African Americans with a large nonwhite immigrant group.
Katz, Loren William, ed. Anti-Negro Riots in the North, 1863. New York: Arno Press, 1969. Compilation of historical documents that illuminate the reasons why immigrants rioted.
Learner, Michael, and Cornel West. Jews and Blacks: A Dialogue on Race, Religion, and Culture in America. New York: Penguin Books, 1996. Two intellectuals, one Jewish, the other African American, discuss the long and paradoxical interplay between their marginalized communities.
Morgan, Edmund. American Slavery, American Freedom: The Ordeal of Colonial Virginia. New York: W. W. Norton, 1975. Useful for providing background information for and chronicling the advent of slavery and racism into the American social and legal fabric.
Morrison, Toni. What Moves at the Margin: Selected Nonfiction. Edited by Carolyn C. Denard. Jackson: University Press of Mississippi, 2008. Contains the Nobel Prize-winning author’s 1993 essay “On the Backs of Blacks,” which presents a stark analysis of the dilemma of race as relating to nonblack immigrants and their attitudes toward and interactions with African Americans.
Swain, Carol Miller, ed. Debating Immigration. New York: Cambridge University Press, 2007. Collection of essays on immigration, the most significant of which concerning racial issues are those by Swain and Jonathan Tilove.
See also: Abolitionist movement; Affirmative action; African immigrants; American Colonization Society; Civil Rights movement; Ethiopian immigrants; Garvey, Marcus; Liberia; Slave trade; Stereotyping; Universal Negro Improvement Association; West Indian immigrants.