Significance: Many early African immigrants came to the United States as students during the early 1920’s. By the 1990’s, many were coming as refugees seeking a better life. Their physical resemblance to African Americans sometimes caused confusion, so they distinguished themselves from the descendants of slaves by retaining their native speech accents and many of their native customs and costumes. They typically have assimilated quickly into American lifestyles, establishing themselves in careers and professions that have provided comfortable livings, stability, and social respectability.
During the seventeenth, eighteenth, and nineteenth centuries, many thousands of Africans were forcibly brought to what is now the United States. Since the early twentieth century, it appears that more Africans have immigrated voluntarily than all those who had been brought earlier as slaves. Many have come as students to attend American schools. Others have been refugees fleeing repressive regimes, persecution, natural disasters, and harsh economic conditions in their home countries.
African immigration intensified after World War II, and an even more significant flow began during the 1970’s, after the American Civil Rights movement improved conditions in America for people of color. Substantial numbers of refugees came from Ethiopia and Somalia, northeast African nations that were embroiled in civil wars and beset by drought and famine. Some 80,000 Africans entered the United States legally during the 1970’s. During the 1980’s, that number grew to about 176,000. It is probable that these numbers do not fully reflect the many illegal immigrants who also entered the country in those years.
During the 1990’s, the number of sub-Saharan immigrants tripled. Africans constituted only about 2 percent of all documented immigrants in 1991, but by 2000 their numbers had increased to about 5 percent. At the start of the twenty-first century, the U.S. Census Bureau reported that nearly 1 million African immigrants were living in the country, 50 percent of whom arrived and settled between 1990 and 2000. Only about 18 percent came before 1980; 26 percent came between 1980 and 1989. In 2001, 31 percent of African immigrants came from the Sudan, which was engulfed in a devastating civil war. Food, housing, and health care shortages plus drastic curtailment of civilian rights caused a debilitating struggle between that nation’s dominant north and its rebellious south. 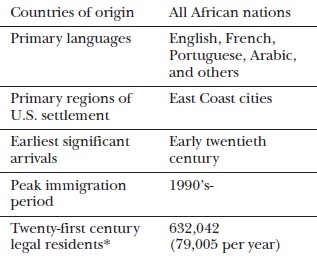 *Immigrants who obtained legal permanent resident status in the United States. Source: Department of Homeland Security, Yearbook of Immigration Statistics, 2008.
By 2004, of approximately 1 million African immigrants living in the United States, 35 percent were from West African countries such as Ghana, Nigeria, Senegal, Sierra Leone, Liberia, and Mali. Twenty-six percent came from such eastern and northeastern African countries as Ethiopia, Kenya, Malawi, Rwanda, and Somalia. Fewer than 3 percent were from such equatorial African countries as Cameroon, Chad, Congo, and Gabon.

A high proportion of Africans who have immigrated to the United States have come from urban backgrounds and have already been accustomed to Western ways. Many speak English well when they arrive and are, for the most part, from families headed by married parents. These attributes have made it easier for immigrants to adapt to life in the United States, and a high proportion of them, about 95 percent, have settled in large cities. About half reside in New York City, Washington, D.C., Los Angeles, Atlanta, and Minneapolis. Nigerians and Ghanaians in particular have favored New York City. Immigrants from Somalia and the Sudan have differed by tending to settle in the Midwest.
African immigrant enclaves have churches and mosques that reflect their traditional religious rituals and customs. Their businesses are Africanthemed, especially in such cities as New York, Chicago, Houston, Washington, D.C., and other cities with large numbers of immigrants. Immigrants who have attained measures of stability and economic success have generally shared their prosperity with their families in Africa. During the early twenty-first century, African immigrants remitted to their relatives more one billion dollars annually. In some countries, most notably the Sudan, these remittances have made important contributions to the balance of trade. 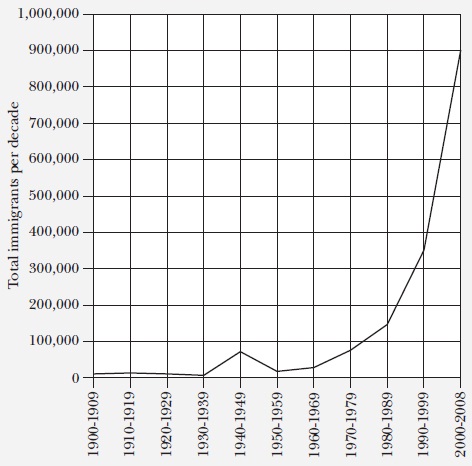 Source: Department of Homeland Security, Yearbook of Immigration Statisticsю, 2008. Figures cover all regions of Africa and include only immigrants who obtained legal permanent resident status.

U.S. Census data from 2000 indicate that black African immigrants have the most education of any population group in the United States. Indeed, they even have higher levels of academic achievement than Asian Americans. They are more likely to be college educated than any other immigrant group. They are also more highly educated than any native-born ethnic group, including white Americans. About 48.9 percent of Africans who have immigrated since the late twentieth century have college degrees.

Sub-Saharan African Nations Sending the Most Immigrants to the United States, 2001-2008 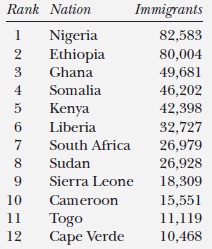 Source: Department of Homeland Security, Yearbook of Immigration Statistics, 2008. Figures for other sub-Saharan nations ranged from 55 immigrants from Mali to 6,937 from Senegal.
During the first decade of the twenty-first century, Africans who came to the United States as students made up only 13 percent of the total black population of the United States. However, that group accounted for 27 percent of all black students in twenty-eight top American universities. These figures are even more impressive in the elite Ivy League universities. Only 6.7 percent of all Ivy League students were from immigrant families, but 40 percent of all the universities’ black students were Africans.
Jane L. Ball
Further Reading
Arthur, John A. The African Diaspora in the United States and Europe: The Ghanaian Experience. Burlington, Vt.: Ashgate, 2008. Examines Ghanaian communities in the United States, especially permanent residents since 1980 and the relationship between new African immigrants and native-born African Americans.
D’Alisera, JoAnn. An Imagined Geography: Sierra Leonean Muslims in America. Philadelphia: University of Pennsylvania Press, 2004. Discusses attempts by Sierra Leonean Muslims to retain their religion, customs, and ethnic identity.
Koser, Khalid, ed. New African Diasporas. New York: Routledge, 2003. Describes the waves of immigration of the late twentieth century fromAfrica to the United States and to northern Europe and the United Kingdom.
Ndubuike, Darlington. The Struggles, Challenges, and Triumphs of the African Immigrants in America. Lewiston, N.Y.: Edwin Mellen Press, 2002. Discusses the struggles of African immigrants in adapting to American society.
Olupona, Jacob K., and Regina Gemignani, eds. African Immigrant Religions in America. New York: New York University Press, 2007. Collection of essays discussing African immigrants’ widely diverse African religious and moral traditions and their role in shaping Christianity in America.
See also: African Americans and immigrants; “Brain drain”; Civil Rights movement; Clotilde slave ship; Ethiopian immigrants; Higher education; Liberia; Quota systems; Settlement patterns; Slave trade; South African immigrants.