Significance: Patterns of immigration in Alabama have varied markedly among different areas of the state, making the state as a whole ethnically diverse; however, arrivals of large groups of new immigrants sometimes prompted eruptions of nativism. Late in the twentieth century, an influx of Mexicans provoked protests from taxpayers and from workers who felt their jobs were threatened.
During the sixteenth century, Spanish explorers found Alabama populated by Iroquoian and Muskogean Indians, large numbers of whom were killed by Europeans. Most of those who survived were forced off their land and sent to what became the state of Oklahoma. Many died on the infamous Trail of Tears during the 1830’s.
After several unsuccessful efforts at colonization by the Spanish, the French established a colony at Mobile, which was still a part of French Louisiana, in 1711. In 1780, that settlement was taken over by the Spanish. In 1813 it was claimed by the United States. Nevertheless, the French and the Spanish had left their imprint on Mobile, and as a port city, it would continue to have a more cosmopolitan atmosphere than any other place in Alabama. Baldwin County, which lies on the eastern shore of Mobile Bay, also attracted a diverse population.
After the U.S. Civil War ended in 1865, immigrants from Italy, Scandinavia, Greece, Germany, central Europe, and French Canada settled in the county, cleared the land and farmed the fertile soil, and fished in the coastal waters. The ethnic origins of the communities they founded are still evident. For example, Fairhope, a town in Baldwin County, was the site of two unusual ventures, both organized by midwesterners. It was originally founded as a semisocialistic single-tax colony, and it was also the home of an early educational experiment, the School of Organic Education. 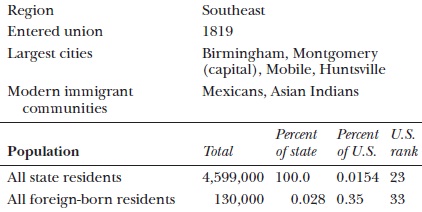 Source: U.S. Census Bureau, Statistical Abstract for 2006.
Notes: The U.S. population in 2006 was 299,399,000, of whom 37,548,000 (12.5%) were foreign born. Rankings in last column reflect total numbers, not percentages.
Alabama’s central and northern parts were settled largely by people from other states. Planters from South Carolina and Georgia, who could no longer grow cotton on their depleted soil, moved to the Black Belt in the central part of Alabama, and Scotch-Irish from the eastern Appalachians traveled westward into northern Alabama. From time to time, new European arrivals attempted to carve out places for themselves. For example, in 1817, two years after the final fall of France’s Emperor Napoleon, some of his officers and office-holders went to western Alabama to establish vineyards and grow olive trees. Their enterprise was a failure, and they left, but the town they named Demopolis remains. During the 1890’s, immigrants from Sweden, Denmark, and Norway were persuaded to move to Fruithurst, a model town in eastern Alabama, but their winemaking project, too, was a failure. Germanimmigrants who founded Cullman in 1848 had no better luck with viniculture, but they remained and succeeded at other enterprises.
During the 1880’s, Birmingham became the center of a new industry, the making of coke pig iron. To the local labor force the manufacturers added immigrants from England, Scotland, Ireland, Italy, and Holland. Because these immigrants made up less than one-fifth of the local workforce, there was no concerted protest to their presence. After World War I, however, when immigrants flooded in from southern and eastern Europe, local workers saw their jobs threatened. Moreover, longtime residents, who were mostly of Protestant Scotch-Irish stock, looked with suspicion on the languages, customs, and religions of the new arrivals, many of whom were Roman Catholics or Jews. The result was a storm of protest and the resurgence of the Ku Klux Klan.
Native Alabamians welcomed well-educated immigrants who could fill obvious needs, such as the German scientists who transformed Huntsville into a technological center, and Indian physicians who came to Alabama to work in understaffed hospitals. However, they resented the presence of uneducated immigrants who began flooding into the state from Latin America, and especially from Mexico, during the 1990’s. They believed these people took jobs away from native Alabamians and burdened taxpayers with their demands for schooling, health care, and social services. The fact that as many as half these immigrants had probably entered the United States illegally and that some were involved in drug trafficking also concerned Alabamians. Some Alabamians supported taking legal steps to expel undocument immigrants. However, others made efforts to teach English to Spanish- speaking immigrants and help them in other ways to become integral members of the community.
Rosemary M. Canfield Reisman
Further Reading
Cobb, James C., andWilliam Stueck, eds. Globalization and the American South. Athens: University of Georgia Press, 2005.
Hamilton, Virginia. Alabama: A Bicentennial History. New York: W. W. Norton, 1984.
Mohl, Raymond A. “Globalization, Latinization, and the Nuevo New South.” In Other Souths: Diversity and Difference in the U.S. South, Reconstruction to Present, edited by Pippa Holloway. Athens: University of Georgia Press, 2008.
Rogers, William Warren, Robert David Ward, Leah Rawls Atkins, andWayne Flynt. Alabama: The History of a Deep South State.Tuscaloosa: University of Alabama Press, 1994.
Waters, Mary C., and Reed Ueda, eds. The New Americans: A Guide to Immigration Since 1965. Cambridge, Mass.: Harvard University Press, 2007.
See also: Clotilde slave ship; Florida; French immigrants; Iron and steel industry; Ku Klux Klan; Labor unions; Mexican immigrants; Mississippi; South Carolina.