Definition: According to definitions in congressional legislation of the 1980’s, “Amerasians” are the children of women of specified Asian nations and American men who were born during a certain time period. More generally, however, the term is often used colloquially to describe children of non-Asian U.S. citizens and Asian nationals
Significance: The vast majority of Amerasian children who immigrated to the United States after the early 1970’s were of American and Vietnamese descent. Those of American and Korean ancestry were a distant second. After 1987, Vietnamese Amerasians were permitted to immigrate to the United States and bring along close relatives, thereby adding to Vietnamese immigration to America.
After World War II ended in 1945, American troops remained stationed in East Asian countries such as Japan, the Philippines, and South Korea. After the Korean War ended in 1953, additional troops remained stationed in South Korea. The years that followed saw an increase in the numbers of children born to American soldiers and local Asian women. The vast majority of the American fathers were European Americans and African Americans. Very often, these fathers abandoned their children and the children’s mothers when they returned to America.

The plight of fatherless Korean American children moved American writer Pearl S. Buck to call attention to their neglect, and she chose the term “Amerasians” for them. In 1954, Harry and Bertha Holt promoted American adoption of KoreanWar orphans. Some of these orphans were abandoned Amerasians facing discrimination in Korea as honhyol, or “mixed blood” children.
From about 1962 to 1975, as the United States became more deeply involved in the VietnamWar, relationships between American men and Vietnamese women increased. On average, relationships in which children were born lasted about two years. As American military authorities discouraged American-Vietnamese marriages, only the most determined Americans brought their Vietnamese wives and Amerasian children home to the United States, where these immigrants constituted the vast majority of the 20,000 residents of the country who were counted as Vietnamese by early 1975.
After the communist victory in Vietnam in early 1975, the situation inVietnam for Amerasians deteriorated badly. Even before that time, life had been difficult for them after their fathers left the country. The communists, however, made their lives even harder by showing active hostility toward the children of their American enemies, and they discriminated severely against them and their mothers. Called con lai, “half-breeds,” or bui doi, “children of the dust,” the children were bullied and rejected and denied good educations and job opportunities— which were already scarce under communism.

When the plight of Vietnamese refugees known who tried to leave their homeland by sea caught the free world’s attention after 1978, the U.S. government became willing to admit them as refugees. The first Vietnamese Amerasian children arrived together with other Vietnamese refugees through the Orderly Departure Program (ODP) after 1979. However, this program did not address all the special needs of the Amerasian children. For three years, U.S. Senator Jeremiah Denton introduced and fought for what would become the Amerasian Immigration Act of 1982. On October 22, 1982, that act became law.
The first of two important pieces of federal legislation on this issue during the 1980’s, the Amerasian Immigration Act defined Amerasians as children whose fathers were U.S. citizens and whose mothers were nationals of Kampuchea (Cambodia), Korea, Laos, Thailand, or Vietnam, and who had been born between January 1, 1950, and October 22, 1982. This definition of Amerasian was a narrow legal term. Critics of the law objected that it did not immediately award citizenship to the Amerasians it defined, and that children of American fathers and women from Japan, Taiwan, and the Philippines were not considered Amerasians under the law.
The first five hundred Amerasian children admitted to the United States under the 1982 law left Vietnam in 1982 and 1983. As many as 5,500 Vietnamese Amerasians also left under the ODP. Soon, however, the Vietnamese government objected to the U.S. government’s calling these people “refugees” and halted their departure. The 1982 law also allowed only the children to immigrate, leaving behind their mothers in favor of American institutional or private sponsors if the children were under eighteen years of age. This provision explains why relatively few Amerasians from Korea and other eligible nations immigrated under this law.
The Amerasian Homecoming Act of 1987, which was enacted on December 22, 1987, corrected some of the deficiencies of the 1982 law. Under this new legislation, all children born to American fathers and Vietnamese mothers between January 1, 1962, and January 1, 1976, and their close relatives could immigrate to America.
The 1987 law quickly turned Amerasians in Vietnam from despised “children of dust” to “children of gold.” Some ordinary Vietnamese posed as relatives of Amerasians in order to go to the United States. By 2009, it was estimated that almost all eligible Vietnamese American children who wanted to leave Vietnam had done so. About 25,000 had immigrated under the Homecoming Act and as many as another 10,000 may have entered the country through other means. Additionally, Vietnamese Amerasians facilitated the immigration of some 60,000 to 70,000 of their Vietnamese relatives. 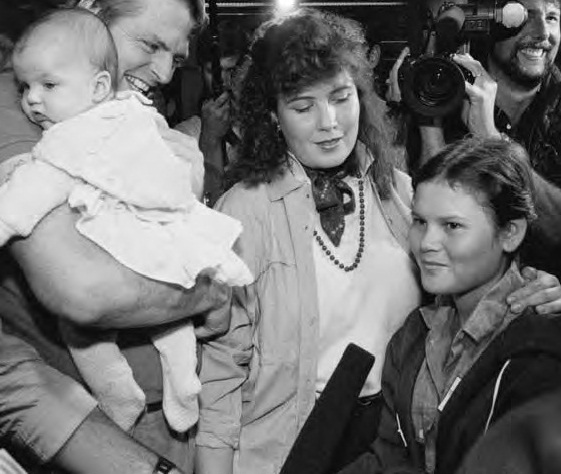 Barry Huntoon (left), an American VietnamWar veteran, with his wife and infant child in 1987, greet a teenage Amerasian girl whom Huntoon believed to be his daughter, born after he left Vietnam. However, the girl’s natural mother later denied Huntoon’s claim. Huntoon’s well-publicized story, later made into the 1990 television film The Girl Who Came Between Them, pointed up the difficulties of establishing the paternity of the many Amerasian children left behind by American war veterans. (AP/Wide World Photos)

Adjusting to Life in America

The majority of Amerasians admitted through the immigration laws of 1982 and 1987 generally succeeded in America. However, they did so only after adjusting to the English language and American culture and overcoming their limited formal educations, traumatized lives, and issues of abandonment and discrimination. Moreover, only about 3 percent of them could locate their American fathers. Those who came with their mothers and already had some command of English were among the most successful. Alcoholism, depression, drugs, and crime troubled some Amerasians, but most eventually adapted well.
Through the 1990’s and the early twenty-first century, there were persistent efforts by U.S. lawmakers to widen the definition of Amerasian children eligible for immigration or to bestow automatic citizenship to them. However, none of these efforts had succeeded by the year 2009.
Many Asian Americans have objected to the colloquial use of the term “Amerasian” for all children of non-Asian American fathers and foreign Asian women, arguing that such usage implies that Asian Americans are not real Americans. The 2007 American Community Survey listed 1,707,488 Asian Americans living in the United States who were also descended fromone or more other racial heritages. Among these people, about 170,000 were foreign born, and 66 percent of them—112,200 people—were born in Asia. Under the broadest, if controversial, definition of the term, they might also be called “Amerasians.”
R. C. Lutz
Further Reading
Gage, Sue-Je Lee. “The Amerasian Problem: Blood, Duty, and Race.” International Relations 21, no. 1 (2007): 86-102. Scholarly analysis of the passage of the Amerasian Immigration Act of 1982 that is strong on the U.S. background regarding Amerasians. The author criticizes the law’s exclusion of Japanese and Filipino Amerasians.
Lamb, David. “Children of the Dust.” Smithsonian 40, no. 3 (June, 2009): 28-37. Informed journalistic overview of the fates of Vietnamese Amerasians and the key events facilitating their immigration to America. Praises the immigrants’ general resilience and corrects stereotypes. Illustrated.
McKelvey, Robert. The Dust of Life: America’s Children Abandoned in Vietnam. Seattle: University of Washington Press, 1999. Powerful and sympathetic portrayal of the fate of Vietnamese Amerasians before, during, and after their immigration to the United States.
Nguyen, Kien. The Unwanted. Boston: Back Bay Books, 2001. Autobiography of a Vietnamese Amerasian left in Vietnam after 1975, his sufferings, resentments, and eventual immigration to the United States.
Yarborough, Trin. Surviving Twice: Amerasian Children of the Vietnam War. Dulles, Va.: Potomac Books, 2005. Portrayal of five Vietnamese Amerasian children and their challenging lives in Vietnam and, after immigration, in America.
See also: Amerasian Homecoming Act of 1987; Asian immigrants; Child immigrants; Families; Intermarriage; Korean War; Nguyen v. Immigration and Naturalization Service; Orderly Departure Program; Refugees; Vietnam War; Vietnamese immigrants.