Definition: Amorphous movements that emerged in the second half of the nineteenth and the early twentieth centuries in response to the influx of non-English-speaking immigrants
Significance: At the turn of the twentieth century, non-English-speaking immigrants flooded American shores, setting off a wave of nativistic fears. In order to combat rising nativism, reformers constructed a number of programs aimed at absorbing immigrants into American civic life.
During the decades following the U.S. Civil War (1861-1865), demands for the creation of a national culture emerged in response to increasing concerns that new non-English-speaking immigrants, if left to their own devices, would erode the moral and economic fabric of the United States. The assassination of PresidentWilliam McKinley in 1901 by Leon Czolgosz, the anarchist son of a Polish immigrant, fueled fears of radicalism on the part of immigrants and galvanized the efforts of many Americans to assimilate immigrants in order to moderate their radicalism. Under the guise of combating neglect and exploitation, Progressives embraced the notion of Americanization and developed programs to promote immigrant acculturation.

Emerging social science programs in universities during the early twentieth century played a key role in fostering immigrant integration into American society. Progressive reformers believed that immigrants could be converted into valued American citizens. Settlement house programs in large cities offered immigrants respites from the crowded, dirty tenements as well as places to learn. This and other initiatives, such as the Young Men’s Christian Association (YMCA), provided health services, vocational training, and civics and English classes.
Other efforts focused on motherhood as a key to assimilation. The domestic science movement published information and research on diet, nutrition, health and cleanliness. Programs sought to limit the sizes of families on the premise that unrestricted population growth ought to be abandoned in modern industrial societies. Many of these programs aimed at giving immigrant women tools to work outside their homes as housemaids, seamstresses, and laundresses. 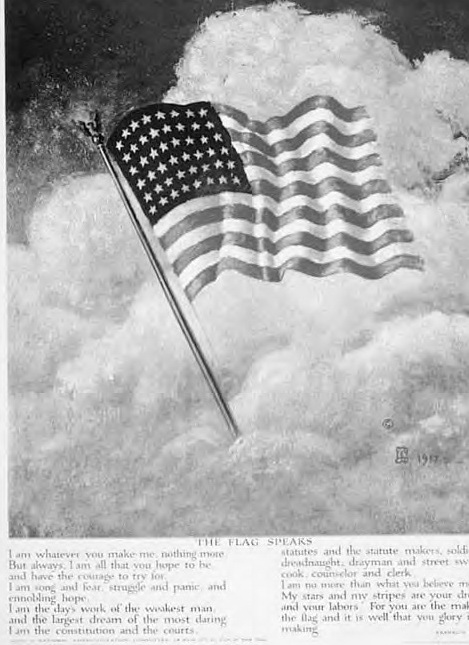 Patriotic poster issued during World War I to promote the idea of Americanization. (Library of Congress)

Many industrialists designed worker education programs to influence the behavior of their immigrant workers and to reduce the growing problem of labor turnover. For example, in 1913, Ford Motor Company instituted what it called its “Five Dollar a Day” program. To receive that level of wages, workers had to be certified by Ford’s sociological department that they were thrifty, sober, and diligent. The emerging theories of scientific management assisted industries by creating a structure of strict organization of production combined with pay incentives. Other companies opened libraries and offered classes aimed at fostering acceptance of American ways, as defined by the employers. Management argued that speaking English was fundamental to unifying the workforce and creating industrial prosperity.
Company medical staffs taught oral and physical hygiene in both the workplace and the home. They also offered married women instruction on household finances and child care. One railroad company used a boxcar converted to reflect its image of the model American home to transport Americanization instructors. The state of California created a Commission of Immigration and Housing to investigate work and living conditions and to teach English and good health practices to immigrants. The state commission recruited religious leaders, social workers, and government bureaucrats to design and implement Americanization programs.

During the late nineteenth century, many efforts to Americanize adult immigrants did not provide the desired results. Employers and reformers recognized that they might reach immigrant parents more effectively through their children, reasoning that children were potentially easier to shape into responsible citizens. Accordingly, companies established kindergarten programs for the children of its immigrant workers, while progressives shifted their focus to creating a system of compulsory public education. Schools in urban settings became vehicles for maintaining social order and inculcating American values. The schools afforded vocational training and English-language classes, taught the value of good citizenship and respect for authority, and provided programs in health and grooming. By the 1890’s, most states with increasing immigrant populations had passed laws mandating compulsory schooling from the ages of eight to fourteen. Historian Richard Hofstadter noted that the intent of public education was to forge a nation, make it literate, and foster civic competence.

Progressives were convinced of the need to mold immigrants into “100 percent Americans” and to create a national culture to promote loyalty to American civic ideals. Many patriotic expressions that Americans would embrace during the twenty-first century were developed in response to fears that non-English-speaking immigrants would erode the national identity. For example, the schoolhouse flag movement required public schools to fly the American flag and conduct daily flag-salute ceremonies. In 1891, Francis Bellamy wrote the Pledge of Allegiance to promote national unity and civic patriotism by honoring the American flag.
Public education emphasized the importance of civic service and duty to country. Patriotic programs emphasized the sacrifices made by past citizens to preserve the union. Laws were passed requiring public schools to observe President Abraham Lincoln’s and President George Washington’s birthdays, and to participate in Memorial Day and Flag Day activities. The invention of the idea of Betsy Ross as maker of the first American flag, patriotic pageants, pictures of national heroes, and teaching of citizenship were all part of the public school Americanization programs.
Progressive teachers advanced ideas of civic patriotism, while Theodore Roosevelt and members of the Grand Army of the Republic (GAR) advanced programs of martial patriotism. Martial patriotism was infused with heroic images of soldiers, wars, and the honor of dying for one’s country. Stories of military adventures written for schoolchildren abounded. Symbols of soldiers and war cropped up in public parks, newspapers, and literature across the nation.
Linda Upham-Bornstein
Further Reading
Bodnar, John. The Transplanted. Bloomington: Indiana University Press, 1985. Major work on the experience of immigrants in transitioning to American capitalism.
Fitzpatrick, Ellen. Endless Crusade: Women Social Scientists and Progressive Reform. New York: Oxford University Press, 1990. Examination of the lives of four progressive women who played a crucial role in the establishment of settlement houses and social reform.
Higham, John. Strangers in the Land: Patterns of American Nativism, 1860-1925. New Brunswick, N.J.: Rutgers University Press, 2002. Significant scholarly study of the history of nativism in America.
O’Leary, Cecilia Elizabeth. To Die For: The Paradox of American Patriotism. Princeton, N.J.: Princeton University Press, 1999. Important work on the construction of American patriotic culture and the struggle to solidify a distinctly American identity.
Sánchez, George J. Becoming Mexican American: Ethnicity, Culture and Identity in Chicano Los Angeles, 1900-1945. New York: Oxford University Press, 1993. Examination of programs in California designed to assimilate Mexican immigrants.
See also: Anglo-conformity; Assimilation theories; Citizenship; Education; English-only and official English movements; History of immigration after 1891; Hull-House; Nativism; Progressivism; Settlement houses.