Significance: Arkansas has experienced less foreign immigration than many other states. Nevertheless, by the late nineteenth century, small groups of immigrants were leaving their cultural and economic marks on the state. During the early twenty-first century, a growing presence of undocumented Latino laborers was fueling a lively and sometimes heated public debate about illegal immigration in Arkansas.
Before the U.S. Civil War (1861-1865), Arkansas’s population was made up mostly of English, Scotch- Irish, and Scottish stock from Kentucky and Tennessee. People of African descent, mostly slaves, also arrived in significant numbers during this period; they constituted about 25 percent of the state’s total population by 1860. Immigration during the antebellum period was slow, however, and Germans— including hundreds of German Jews—constituted one of the largest immigrant groups. In 1833, a planned German colony centered in Perry and White Counties collapsed, but 140 of the Germans remained, providing a support base for postbellum immigrants. German families continued to trickle into Arkansas over the next three decades, and by 1860, 1,143 Germans resided in the state.
As happened in many southern states during the years immediately after the Civil War, many leading Arkansans feared that their state’s small population and lagging rates of immigration were hindering economic development. During the 1870’s, the state began to circulate promotional literature abroad and dispatched agents to attract western and northern European immigrants to Arkansas. Such efforts were most successful in attracting more Germans, whose population grew to 5,971 by 1900. Although German accounted for only 0.46 percent of the state’s population, they left an enduring cultural imprint on the state’s landscapes—especially in the scattered agricultural communities they founded in the Ozarks. 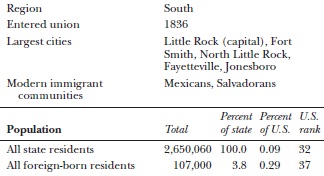 Source: U.S. Census Bureau, Statistical Abstract for 2006.
Notes: The U.S. population in 2006 was 299,399,000, of whom 37,548,000 (12.5%) were foreign born. Rankings in last column reflect total numbers, not percentages.
Italians were also a small but notable presence inlate nineteenth century Arkansas. Indeed, while several Italian agricultural communities appeared in the South during the late nineteenth and early twentieth centuries, Arkansas’sTonti town, founded during the 1890’s, was by far the most successful. Small influxes of French, Irish, Czech, Slovak, Syrian, Greek, and even a few Chinese laborers also arrived during the late nineteenth and early twentieth centuries. Some of these people were agriculturalists, but many more gravitated toward such population centers as Little Rock and Fort Smith. On the whole, however, Arkansas remained a state with few immigrants.
This picture began to change during the late twentieth century. During the 1990’s, Latin American—mostly Mexican—workers began rapidly replacing African Americans in the state’s farmlabor sector, as well as in poultry and other agricultural product processing plants, construction trades, and light manufacturing. Indeed, Arkansas’s 337 percent rate of increase in Latino population between 1990 and 2000 was one of the nation’s highest. This growth—in large part the result of economic pull factors in the United States (demand for cheap, unskilled labor) as well as the potent push factors of poverty and limited labor markets in Mexico and other Latin American countries—has led to significant changes in Arkansas’s cultural fabric. It has also led to increasingly heated political discourse over the desirability and future of illegal immigrants in Arkansas society.
Although other immigrant groups—including Vietnamese and other Asians—have begun increasing their presence in Arkansas, their growth rates lag far behind those of other, more rapidly developing southern states, and Asian immigrants are vastly outnumbered in Arkansas by Mexicans and Salvadorans, who together constitute more than 50 percent of the state’s immigrant population. The fact that Arkansas’s third-largest single immigrant group in 2000 was Germans showed a surprising continuity with the state’s immigrant past. However, the number of Germans remained tiny in comparison to that of Latinos and the state’s general population.
Jeremiah Taylor
Further Reading
Ray, Celeste, ed. Ethnicity. Vol. 6 in The New Encyclopedia of Southern Culture. Chapel Hill: University of North Carolina Press, 2007.
Trumbauer, L. German Immigration. New York: Facts On File, 2004.
Watkins, Beverly. “Efforts to Encourage Immigration to Arkansas, 1865-1874.” Arkansas Historical Quarterly 38 (1979): 32-62.
See also: British immigrants; Czech and Slovakian immigrants; German immigrants; Greek immigrants; Italian immigrants; Jewish immigrants; Mexican immigrants; Mississippi; Mississippi River; Missouri.