Significance: American art forms, like American music and literature, has been immeasurably enriched by the contributions of artists from every land coming to the United States to add their unique ideas and styles to the artistic tapestry.
Few art forms created in the United States have been completely free of foreign roots. American music, literature, and art have all been shaped from the beginning by artistic trends, figures, and movements from other countries, by artists immigrating to the United States, and by those moving back and forth between the United States and other countries. Scholars consider jazz the unique contribution America has made to the world’s music and wonder what American jazz would be without its African, Caribbean, and Latin elements—the heritage of jazz artists who carried their native musical traditions to the United States. American folk music has its tangled roots in Irish, Scottish, and English ballads, and the American musical goes back through George Gershwin and Irving Berlin (himself an immigrant from Russia) toW. S. Gilbert and Arthur S. Sullivan in England to a long tradition of the European music hall. Twentieth century American literature is notable for the modernism of William Faulkner and other nativeborn writers, but modernism is Anglo-American in origins and was fostered by Americans such as T. S. Eliot, Ezra Pound, and Gertrude Stein, who emigrated to the Europe of James Joyce, Virginia Woolf, and others; by Europeans bringing modernist voices to the United States (such as the German novelist Thomas Mann, who settled there in 1936); and by American writers such as those of the lost generation (Ernest Hemingway, F. Scott Fitzgerald, and others), who lived abroad during the 1920’s.

The history of the visual arts is a similar story of cross-fertilization and immigrant imagination, coming from every direction of the globe. American photography—to take the simplest example—is hard to imagine without the studies of locomotion by Eadweard Muybridge, who was born and died in England but who did his most important photographic experiments as a resident in the United States; the social documentation of immigrant life by the Danish-born Jacob Riis (How the Other Half Lives, 1890); or the studies of San Francisco’s Chinatown during the 1890’s by the German-born Arnold Genthe. Also notable is the creative work of Luxembourg-born Edward Steichen from the early twentieth century up to The Family of Man exhibition at the Museum of Modern Art in New York (which he curated in 1955), the most popular photography exhibition ever mounted; the abstract experiments of László Moholy-Nagy (who came to the United States from Hungary in 1937); and the work of Ben Shahn (Lithuania, 1906), Andreas Feininger (France, 1939), Robert Frank (Switzerland, 1947), and the famed portrait photographer Yousuf Karsh (Armenia, 1928). 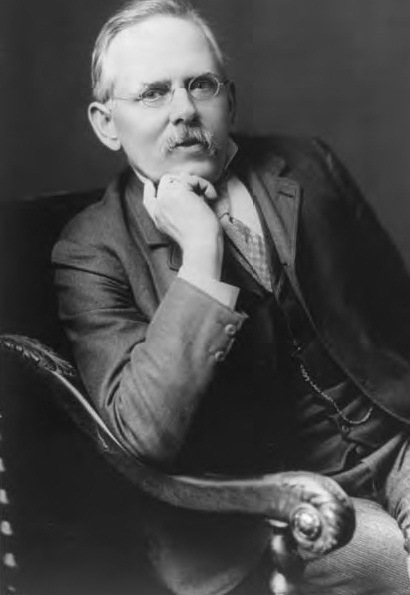 Danish-born photographer Jacob Riis in 1904. (Library of Congress)
From its beginnings, American architecture had been an eclectic mix of styles, but it emerged during the twentieth century as leader of the International Style thanks in large part to immigrant artists: Louis Kahn (Estonia) came to Philadelphia in 1905, Rudolf Schindler (Austria) to Chicago in 1914, and both Richard Neutra (Austria) and Eero Saarinen (Finland) to the United States in 1923. The biggest boost to American architecture, as to other artistic forms, was the rise of Nazi Germany: With the closure of the influential Bauhaus school for architecture and design in Berlin in 1933, painter and art theoretician Josef Albers was hired at the newly opened Black Mountain College in North Carolina; László Moholy-Nagy took his experimental design, sculpture, and photography to Chicago; and Walter Gropius became a professor of architecture at Harvard, to be followed in that chair by Ludwig Mies van der Rowe (who had headed the Bauhaus after Gropius left), the most influential American architect after 1945. Ulrich Franzen (Germany) studied with Gropius at Harvard and then went to work for another immigrant artist, I. M. Pei, who had immigrated from China in 1935.
Sculpture in America tells a similar story. Possibly the best-known sculptor of the nineteenth century was Augustus Saint-Gaudens (1848-1907), born in Ireland of French descent and brought to the United States as an infant, who created public memorials such as the Diana statue at Madison Square Garden in New York (1891) and the Robert Gould Shaw Memorial in Boston Common (1884- 1897). Alexander Milne Calder, the grandfather of the twentieth century American artist Alexander Calder, came from Scotland in 1868 to create public sculptures (such as the statue of William Penn atop Philadelphia’s city hall). Other sculptors from Europe included Arthur Lee (who emigrated from Norway to the United States in 1890), Louise Nevelson (Russia, 1905), Louise Bourgeois (France, 1938), Eva Hesse (Germany, 1939), Jacques Lipchitz (Lithuania, 1941), and Naum Gabo (Russia, 1946).

The history of American painting is studded with immigrant names. John James Audubon (1785-1851), America’s most famous wildlife painter, was born in Haiti of French parents and came to the United States in 1803. Thomas Cole, the ablest of early American landscape painters, came from England in 1818. Albert Bierstadt’s panoramic landscapes have defined the American West ever since he came to the United States from Germany in 1832. William Michael Harnett, the still-life painter, came to the United States from Ireland in 1849. One of the most endearing American images, the painting of Washington Crossing the Delaware, was made by the German-born Emanuel Gottlieb Leutze in 1851.
The second major wave of European immigration, from approximately 1880 to 1920, included a number of painters who would gain fame in the United States. The 1913 Armory Show in New York first introduced America to modern European artists such as Paul Cézanne, Marc Chagall, Henri Matisse, and Pablo Picasso. However, it also included a number of immigrant artists, such as the painters Oscar Bluemner (from Germany, 1892), Abraham Walkowitz (Russia, 1893), Joseph Stella (Italy, 1896), and Jules Pascin (Bulgaria, 1914), and the sculptors Gaston Lachaise (France, 1906), Elie Nadelman (Russia, 1914), and Alexander Archipenko (Russia, 1923). The most controversial work at that show was Nude Descending a Staircase (1912), a painting by Marcel Duchamp, who worked intermittently in the United States after 1915 and became a U.S. citizen in 1955.
Other noted artist-immigrants from this period include Max Weber (who came from Russia in 1891), Louis Lozowick (Ukraine, 1906), Peter Blume (Russia, 1911), and Raphael Soyer (Russia, 1912). Artists continued to immigrate to America during the twentieth century, and especially after the rise of Nazi Germany. George Grosz came from Germany in 1932, Hans Richter in 1941, and Max Beckmann in 1947. The noted abstract painter Piet Mondrian electrified the American art scene when he arrived from the Netherlands in 1940, but such paths of art influence are often fluid and difficult to define. The famed Mexican muralists of the 1920’s and 1930’s—Diego Rivera, José Clemente Orozco, and David Alfaro Siqueiros—were all residents of the United States at one time or another and worked on a number of mural projects in New York, Los Angeles, Detroit, and other cities. The legacy of these muralists’ powerful social realism has lasted since then, yet one of Siqueiros’s students when he taught in New York City during the 1930’s was Jackson Pollock, who would become one of the most famous abstract expressionist painters, dominating American art after World War II.
Many of the postwar painters were immigrants: Mark Rothko came from Russia in 1913, Jack Tworkov from Poland the same year, Arshile Gorky from Turkish Armenia in 1920,Willem de Kooning from Holland in 1926, Hans Hoffman from Bavaria in 1932, and Saul Steinberg from Romania in 1941. American art since the 1950’s has continued to see an influx of immigrant artists: The painter David Hockney (born in Bradford, England) settled in Los Angeles in 1976; and the sculptors Claes Oldenburg (who came from Sweden in 1936) and Christo (Bulgaria, 1964) and the architect Paolo Soleri (Italy, 1947) have transformed the American landscape with their work.

American art has been enriched not only by Europeans but also increasingly by people from other continents. Waves of immigration after 1980 have come from Asia, Latin America, and the Middle East, and American art has experienced an infusion of styles and images from all these directions. The Mexican tin retablo tradition of altar paintings lives on in the early twenty-first century, as do Aztec and Aztlán images and myths that have infused the art of the Southwest for centuries and can be found in the multimedia assemblages of Guillermo Pulido, the prints of Enrique Chagoya, and the quilts of Maria Enriquez de Allen, all three of whom are immigrants to the United States from Mexico. Other Latino artists have come from Cuba (the painters Luis Cruz Azaceta, Juan González, and Cesar Trasobares), from Brazil (Lito Cavalcante, who came to the United States in 1972), from Uruguay (the painter, sculptor, and woodcut artist Naul Ojeda), from Chile (the painter Jorge Tacia has lived in New York since 1981), and from other South and Central American countries. 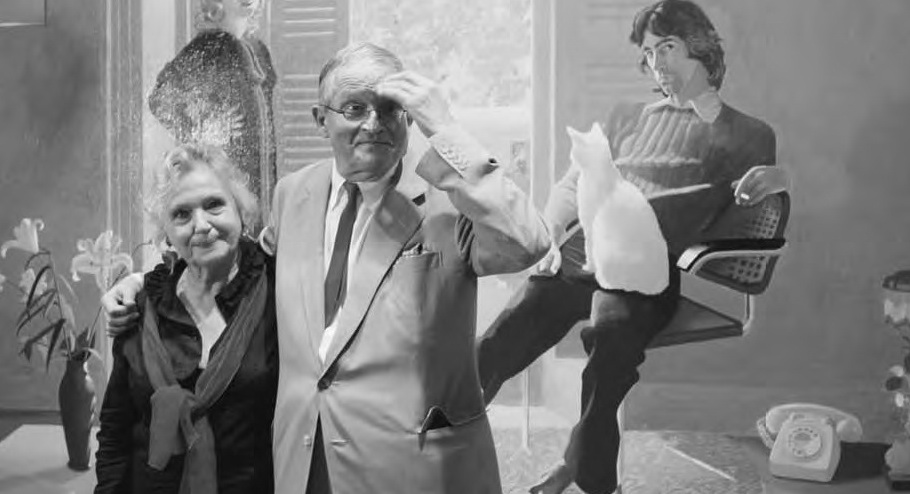 British-born painter David Hockney, with friend and model Celia Birtwell, standing in front of his painting Mr. and Mrs. Clark and Percy at a 2006 exhibition. (AP/Wide World Photos)
The influx of Asian art has also been significant: Chinese (painters H. N. Han and Bing Lee), Korean (video artist Nam June Paik), and Japanese (painters Masami Teraoka, Henry Sugimoto, and Yuriko Yamaguchi) artists immigrated to the United States during the twentieth century, as well as artists from Southeast Asia—Vietnam, Cambodia, and Thailand. Artists from the Middle East include the Iranian-born sculptor Siah Armajani, best known for designing the Olympic torch presiding over the 1996 Atlanta Olympic Games, and the American sculptor and painter Zigi Ben-Haim, who was born in Baghdad, Iraq, and later lived in Israel.
Art in the twenty-first century knows few national borders. Though some artists are unable to emigrate, images from their art as well as its forms and techniques can travel around the globe in nanoseconds through the Internet. The 1913 Armory Show in New York was the first time that most Americans were able to witness the modern European masters; less than a century later, art could be transmitted throughout the world instantly. For example, in 1989 David Hockney sent work for the São Paulo Art Biennial via fax. Art can be viewed online, and “Internet art” has itself become an important artistic form.Technology and immigration are both sources of art inspiration and tradition during the twenty-first century.
David Peck
Further Reading
Lippard, Lucy R. Mixed Blessings: New Art in a Multicultural America. 1990. New York: New Press, 2000. Survey of late twentieth century multiethnic art, especially its Native American, Latino, Asian American, and African American forms. Lippard does not identify artists as native or immigrant, but she fully illustrates the ways that artistic forms, idioms, and styles from other cultures have become a necessary part of the language of American art.
McCabe, Cynthia Jaffee, ed. The American Experience: Contemporary Immigrant Artists. New York: Balch Institute for Ethnic Studies, 1985. This exhibition catalog includes curator McCabe’s introduction (“Immigrants and Refugees: The Internalization of American Art”) as well as essays by Yi-Fu Tuan (“Immigrant Artists: A Conceptual Framework”) and Thomas Kessner (“Immigration and the American Experience”), followed by portraits of the twenty-eight contemporary immigrant artists in the show, including Christo, Patrick Ireland, and John Stockdale.
_______. The Golden Door: Artist-Immigrants of America, 1876-1976. Washington, D.C.: Smithsonian Institution Press, 1976. This volume, which emerged from an exhibition at the Hirshhorn Museum and Sculpture Garden as part of the bicentennial celebration of 1976, includes introductions by historian Daniel J. Boorstin (“The Immigrants’ Vision”) and curator McCabe (“A Century of Artist-Immigrants”), a sixty-page “Chronology, 1876-1976,” and a “Catalogue of the Exhibition” with date of arrival, date of U.S. citizenship, and analysis and examples of the work of some sixty-eight artist-immigrants, from Max Weber to Paul Rotterdam.
See also: Berlin, Irving; Literature; Music.