Significance: Through almost an entire century after the first wave of Chinese immigrants to California laid a strong foundation of Asian immigration during the 1850’s, Asian immigrants faced racist legal barriers seeking to exclude them from the United States. After these barriers were lowered during the 1940’s and finally fell in 1965, Asian immigration flourished. By 2007, some 14.5 million people of full or partial Asian descent lived in the United States, accounting for almost 5 percent of the U.S. population, with early twenty-first century trends showing promise of continued growth.
Asian immigration to the United States began in earnest during the mid-nineteenth century, when the California gold rush attracted thousands of Chinese miners. By that time, Asian workers were also beginning to immigrate to the kingdom of Hawaii, which the United States would annex as a territory in 1898 and later make into a state. Immigration to Hawaii thus contributed to U.S. immigration. The indigenous peoples of Hawaii and other Pacific Islands that came under the control of the United States were not immigrants, but they are often counted among Asian Americans.

When the first 4,000 Chinese miners arrived in California in 1849-1850, they found significant legal barriers to Asians already in place. As early as 1790, the U.S. Congress limited the right of immigrants to become naturalized U.S. citizens to free white people. The state of California tried to prevent further Chinese immigration by passing laws of its own in 1855 and 1858 that would later be ruled unconstitutional. The 1860 U.S. Census listed Asian residents for the first time. Almost all the 34,933 Asians in the country that the census counted were Chinese living in California; 90 percent of them were male. At that time, they accounted for only 0.1 percent of the entire U.S. population. 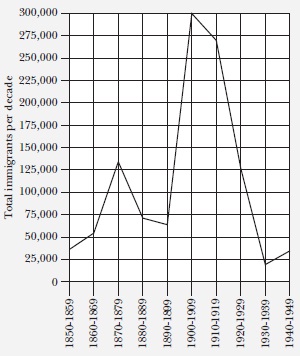 Source: Department of Homeland Security, Yearbook of Immigration Statistics, 2008. Figures cover all regions of Asia, including Turkey and other Middle Eastern nations, and include only immigrants who obtained legal permanent resident status.
Passage of the Fourteenth Amendment in 1868 inadvertently aided Asian immigrants. The amendment explicitly granted citizenship to all persons born in the United States, which meant that children born to Asians in the United States were automatically American citizens. During that same year, the United States and China signed the Burlingame Treaty. That document affirmed the mutual right of emigration but granted only residency, not naturalization rights, to immigrants from each country. With the gold rush over, thousands of Chinese immigrants worked on the new transcontinental railroad that would link California to the East in 1869.
In 1869, the first Japanese immigrants arrived in California. Nevertheless, the 1870 U.S. Census showed that the vast majority of 63,199 Asians in America were still Chinese, 49,277 of whom lived in California, with only 55 Japanese adding to the Asian total.
The federal Page Law of 1875 outlawed importing immigrants against their will, transporting them in slave-like conditions, or bringing them into the United States if they were convicts or prostitutes. Hostile white Californians unjustly believed that many Chinese immigrants fell into these categories. The U.S. Census of 1880 counted 105,465 Chinese living in the United States, along with 145 Japanese, almost all in the West, particularly California.

In 1882, the U.S. Congress passed the infamous Chinese Exclusion Act. It prohibited the further immigration of laborers from China for ten years, forbade Chinese laborers in America to bring in their wives from China, and affirmed Chinese ineligibility for naturalization. Only Chinese merchants and scholars were allowed to come. The act severely halted growth of the Chinese population in America. Consequently, the 1890 U.S. Census revealed an increase of only 2,000 Chinese over the previous decade, with a total of 107,472. There were also 2,039 Japanese U.S. residents. Facing hostility in California and the West, Chinese immigrants began to move to the Northeast, the Midwest, and the South.
While the Chinese Exclusion Act was renewed for another ten years, the 1890’s saw a surge in Japanese immigration to America. To ensure a positive, family-based immigrant society, Japan encouraged the emigration of both men and women. In California, many Japanese took to labor-intensive farming, cultivating produce and flowers. The 1900 U.S. Census showed a total of 114,189 Asian residents and a tenfold increase of Japanese residents, to 24,326. The Chinese population increased to 89,863 against considerable legal odds.
In 1907-1908, a series of “Gentlemen’s Agreements” between the governments of Japan and the United States established that no more Japanese laborers would immigrate to America. Instead, Japan promoted the emigration of women to help form Japanese families in the United States. The U.S. Census of 1910 showed 72,157 Japanese residents and 71,531 Chinese. For the first time, Japanese outnumbered Chinese in the United States. Indicative of the growing diversity of Asian immigrants, the census also showed, for the first time, 2,545 Hindus, who were mainly Asian Indians, as well as 462 Koreans and 160 Filipinos. Most of the latter were students who came after the Philippines became a U.S. colony in 1898.
The Immigration Act of 1917 established the Asiatic Barred Zone—a vast region of Asia from which no immigration to the United States was to be permitted. The zone included all of Asia with the exception of Japan, a World War I ally of the United States, and the Philippines, then a U.S. dependency. Coinciding with a rise of racist attacks on Asian communities in the United States during the 1920’s, the Immigration Act of 1924 barred entry to all Asians other than Filipinos. However, the right of Filipinos to immigrate was terminated by a legal subterfuge in 1934. Despite these barriers, Asian immigrants were able to make their living in America, and their children treasured their U.S. citizenship. Ethnic Asian enclaves such as Chinatowns in major cities provided comfort to many Asians in face of white hostility. 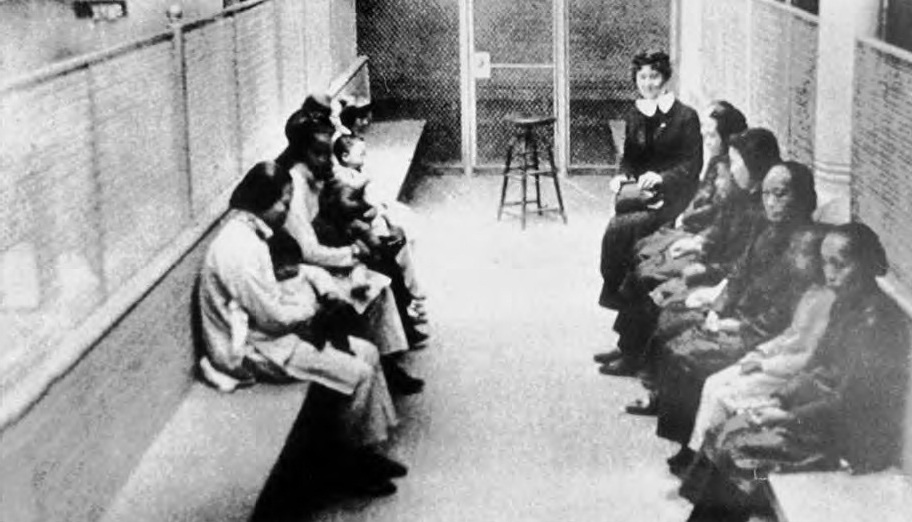 Chinese and Japanese women waiting within an enclosure to be processed at the Angel Island Reception Center during the 1920’s, a period during which very few Asian immigrants were admitted to the United States. (AP/Wide World Photos)

World War II and After

After Japan attacked Pearl Harbor on December 7, 1941, the United States reacted harshly against Japanese Americans. Executive Order 9066, signed by U.S. president Franklin D. Roosevelt on February 19, 1942, directed federal authorities to relocate from their homes on the West Coast all persons of Japanese ancestry, both aliens and U.S. citizens alike. Eventually, more than 110,000 ethnic Japanese were sent to relocation camps dispersed in remote regions of the Far West.
The internment order was the infamous high water mark of anti-Asian U.S. sentiment. The Chinese Exclusion Act was repealed in 1943, as the United States and China were wartime allies. Repeal of the discriminatory law carried much symbolic weight. By 1944, internees were starting to be released from the Japanese relocation centers, which were finally closed in 1945. Meanwhile, Japanese American volunteer soldiers fought bravely in World War II.
After World War II ended in 1945, U.S. immigration policy shifted positively toward Asian immigration. In 1946, Filipinos and Asian Indians were given the right to become naturalized citizens. In 1947, Asian American soldiers were allowed to bring home their Asian spouses. After Mao Zedong’s Communist Party created the People’s Republic of China in 1949, the United States granted refugee status to 5,000 Chinese studying in America. 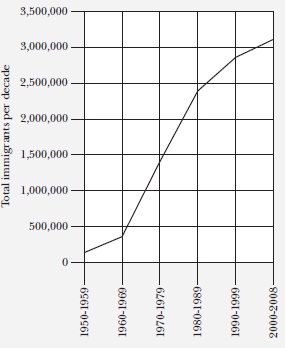 Source: Department of Homeland Security, Yearbook of Immigration Statistics, 2008. Figures cover all regions of Asia, including the Middle East, and include only immigrants who obtained legal permanent resident status.
The Immigration and Nationality Act of 1952 gave Asian immigrants the right to become U.S. citizens. The act set national quotas for immigration while establishing nonquota immigration rights for spouses and unmarried children of U.S. citizens. This provision greatly helped male Asian immigrants, particularly Chinese and Filipinos, bring in their wives after they obtained citizenship.
Indicative of the 1952 act’s positive effect on Asian immigration, the number of Asian Americans living in the continental United States, which had risen from 254,918 in 1940 to 321,033 in 1950, climbed to 565,443 in the U.S. Census of 1960. As always, the census did not distinguish between citizens and alien residents. Nevertheless, its data offer a valuable tool to measure success of Asian immigration. When Hawaii became a U.S. state in 1959, it added some 315,000 Asian Americans to the U.S. population, as well more than 100,000 people of either full or partial Hawaiian descent. In Hawaii, Asian Americans immediately won political power, as Daniel Inouye and Hiram Fong became the first two Hawaiian representatives in the U.S. Congress. In 1962, Inouye became the first Asian American senator. 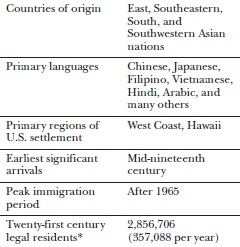