Between 1907 and 1917, thousands of Sikh landowners and peasants left the Punjab in northern India to search the western shores of North America for employment and higher wages. First immigrating to Vancouver, Canada, Punjabi Sikhs settled in Oregon,Washington, and Northern California to work on the Western Pacific Railroad. Legally prohibited from bringing their wives and families, some young, male Sikhs married Mexican women, creating a “Mexican Hindu” culture. The small Sikh immigrant community remained faithful to its religious and cultural practices, establishing temple settlements for other Asian Indian travelers. 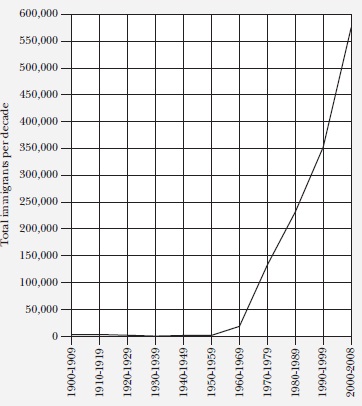 Source: Department of Homeland Security, Yearbook of Immigration Statistics, 2008. Figures include only immigrants who obtained legal permanent resident status. Immigration records for 1820-1899 show a total of only 687 immigrants.
Leaving employment on the railroad and in the lumber mills, by 1910 Asian Indians began contracting for agricultural jobs in California, where there was a dire need for farmworkers. Comfortable and experienced working in the fields, Asian Indians moved from working as day laborers to tenant farmers.Transacting bank loans, Indians purchased acreage. By 1914, as prosperous landowners, the Asian Indian immigrants started moving inland to central California to establish independent ethnic agrarian communities. Hard-working and Englishspeaking, the Asian Indians posed little threat to the socioeconomic fiber of the region. However, by the 1920’s the hostilities toward the growing number of “Asiatics” escalated as the competition between Asian immigrants and white workers increased.

As early as 1905, an association known as the Asiatic Exclusion League (AEL) organized to oppose Asian immigration. It launched an anti-Asian crusade toward not only the Chinese and Japanese immigrant populations but also the three thousand new Asian Indian immigrants who had arrived in California at the end of the decade. After years of fighting for congressional legislation to limit immigration, the exclusionists were successful in adopting a series of laws that led to turning away hundreds of Asian immigrants. The Immigration Act of 1917 (also known as the Asiatic Barred Zone Act) restricted immigration from Asia. Soon afterward, the Supreme Court ruled in United States v. Bhagat Singh Thind (1923) that Indians were not included under the “statutory category as white persons”; consequently, Indians were denied the right to naturalization, and previously naturalized Indians were stripped of U.S. citizenship. 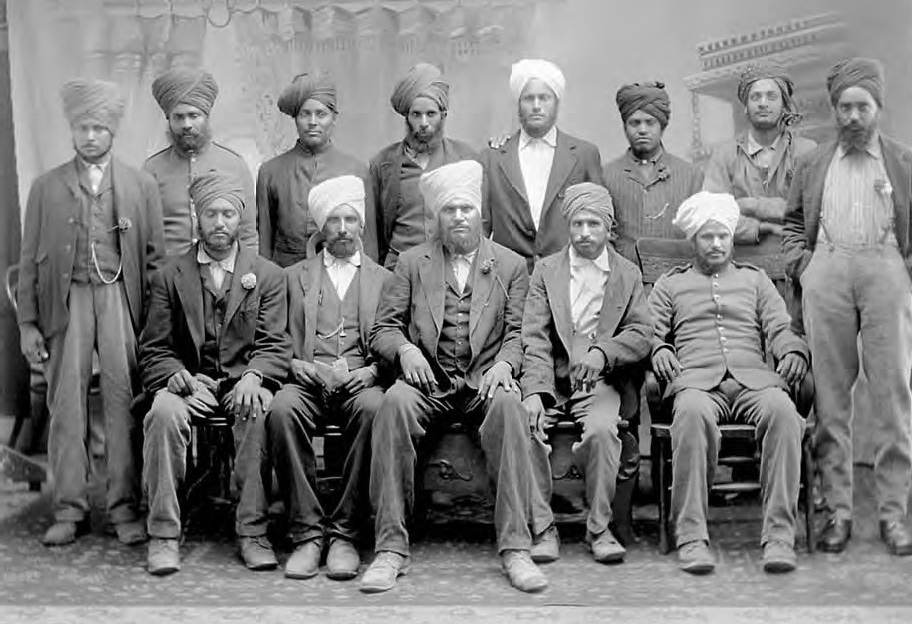 The tides turned under President Lyndon B. Johnson when he signed into law the Immigration and Nationality Act of 1965 (also known as the Hart-Celler Act), lifting the national-origin quotas system and issuing visas on the basis of preferred skills or family reunification. The initial post-1965 immigrants were professionals and their families; after the mid-1970’s, the Asian Indian immigrants moved into small business ownerships and selfemployment ventures in restaurants, travel agencies, and motels. Almost 40 percent of all Asian Indians who entered the United States after 1965 arrived on student or exchange visitor visas. By 1990, the Indian population had increased to 786,694.
With the passage of the Immigration Act of 1990, preference was given to immigrants with high technology-based skills, advanced degrees, and exceptional professional talents. Contributing to the “brain drain” in India, colleges throughout the United States hosted a significant number of Indian students, making India one of the top five sending countries. By 2000, Asian Indians constituted the fourth-largest immigrant community in the United States. 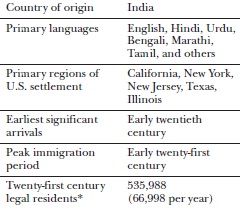