Identification: German-born American businessman
Born: July 17, 1763; Waldorf, near Heidelberg, Germany
Died: March 29, 1848; New York, New York
Significance: John Jacob Astor established the first American monopoly with his American Fur Company (1808-1834) and devoted his business acumen and enterprising energies to controlling the fur trade from the Great Lakes to the Pacific coast and beyond to China, where he traded furs for tea and Chinese porcelains at great profits.
Born to German parents of French Huguenot descent Johann Jacob Astor, a butcher/village bailiff, and his first wife, Maria Magdalena Vorfelder, youngest son John Jacob Astor immigrated to New York City in 1783. He opened a musical instrument/ fur store that he expanded into a worldwide fur empire with his American Fur Company and its subunits, the Pacific Fur Company and the Southwest Fur Company. The American Fur Company was organized into departments after 1822, with St. Louis serving as the western headquarters, controlling Missouri, the lower Mississippi River, and Illinois, and the northern department headquartered at Mackinac Island, dominating the Great Lakes and the upper Mississippi River regions. Originally based at Astoria at the mouth of the Columbia River in Oregon (until the War of 1812), Astor engaged trappers and Native Americans to secure the fur pelts that he shipped to Canton, China, and Astor’s ships also traded with South America and Hawaii, where they purchased cargoes of sandalwood marketed in China (1816-1828). Astor’s biography appeared in Astoria (1836) by Washington Irving. 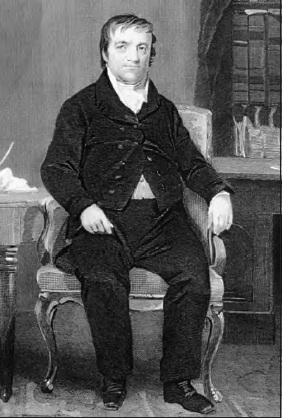 John Jacob Astor. (Library of Congress)
Astor was selected as one of the directors of the Second Bank of the United States. Following the War of 1812, he profited from the elimination of Canadian and British fur trading competition. Astor advised President James Monroe on appointments to the port of New York. Astor carefully selected his ship captains and business agents who sold his goods abroad, and he supported a network of relatives whom he employed in his fur business, banking interests, and Manhattan real estate investments. Astor married Sarah Todd on September 19, 1785, and they had four children. His greatest benefactions were the Astor Library and the German Society of New York (1836), which dispensed information to immigrants.
Barbara Bennett Peterson
Further ReadingSee also: Germanimmigrants; Melting pot theory.