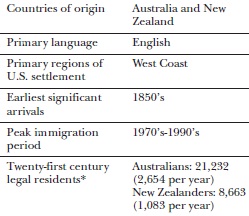 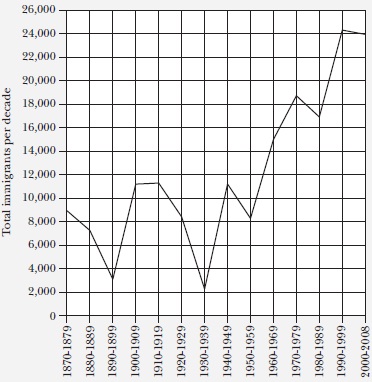 Source: Department of Homeland Security, Yearbook of Immigration Statistics 2008. Figures include only immigrants who obtained legal permanent resident status.
By 1990, the U.S. Census reported that slightly more than 52,000 Americans reported having Australian orNewZealander ancestry. This figure represented less than 0.05 percent of the total U.S. population. The 2000 U.S. Census reported the presence of 45,650 Australian-born noncitizens and 15,315 Australian- born U.S. citizens in the United States. A little more than one-half of these people were female.

Australia’s contribution to U.S. immigration and security strategies after the terrorist attacks on the United States of September 11, 2001, offers an interesting insight into global networking. The U.S. Visitor and Immigrant Status Indicator Technology program (US-VISIT), established by the new U.S. Department of Homeland Security, implemented an integrated entry and exit data system to record all entries into and exits out of the United States by covered individuals. It was designed to verify identities of travelers and to confirm their compliance with the terms of their admission to the United States. The key step in implementing these legislative requirements was a test conducted between June and September of 2005 in partnership among Australia, New Zealand, and the United States. The key airports involved were the international airports in Los Angeles and Sydney, Australia. The test evaluated the operational impact of the new technology as well as the performance of the e-Passports and the reader solutions being tested.
In 2006, Australian and New Zealander delegates, together with partners from a number of other Asia Pacific countries, worked in conjunction with the U.S. Department of Homeland Security to devise and endorse a multilateral framework for detecting and preventing the use of lost, stolen, and invalid passports for travel and entry.

As an immigrant group. Australian immigrants are comparatively highly educated. Among those counted in the United States in 2000, 26 percent held bachelor degrees, and 20.3 percent held graduate or professional degrees. Over the next several years, record numbers of Australians left their homeland. Most of these emigrants were younger and better educated than Australia’s general population. Their major destinations have been North America, the United Kingdom, and the European Union. Emigrants have been motivated primarily by the attractions of higher salaries, better working conditions, better educational opportunities, and the possibility of better lifestyles in other countries. Although the numbers of emigrants have been relatively small in comparison to Australia’s total population, the consequences of their leaving their country has been significant because they represent a much higher proportion of the country’s future cultural, intellectual, and economic leaders. The other side of this issue is the significant contributions that these well-educated immigrants make to their new homelands. 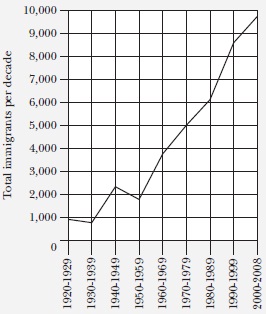