Significance: Although some estimates suggest that the numbers of Austrians in the United States have represented less than onetenth of 1 percent of the entire U.S. population, Austrian immigrants and Austrian Americans have had a profound impact on the arts, sciences, and popular culture of the United States.
Austrian immigration provides an example of the difficulty of defining certain American immigrant populations because of changing borders and ethnic identifications. An analogue of modern Austria existed in ancient times as a province of the ancient Roman Empire. In later centuries, the region persisted, at various times and in various forms and sizes, as a duchy, as a powerful empire in its own right, and as a partner with Hungary in the Austro- Hungarian Empire.
The modern state of Austria was not established until 1918. Therefore, pre-1918 statistics on Austrian immigration cannot be authoritative for several reasons. For example, under the Austrian and Austro-Hungarian empires, members of many ethnic groups were technically Austrian citizens. These included Serbs, Czechs, and Slovenians. However, when these peoples, who were technically Austrian nationals, immigrated to the United States, American immigration officials did not always distinguish between ethnicity and national citizenship. For this reason, Austrian immigrants of Serbian descent might have been recorded as “Serbians,” not as “Austrians.” Conversely, immigration officials were also not always clear about distinctions between Austria and its fellow German-speaking neighbor Germany. It is likely that more than a few immigrants who should have been recorded as Austrians were listed as Germans. 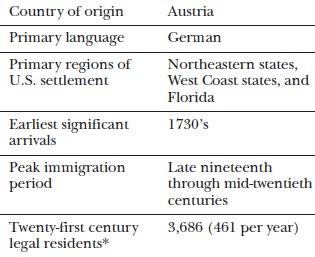 Four different periods in U.S and European history have seen the most significant numbers of immigrants from Austria. The first occurred before the American Revolution and was prompted by quests for religious freedom. Much of Germanspeaking Europe from the seventeenth through the nineteenth centuries consisted of dozens of small duchies and principalities and kingdoms. The religious preferences of their rulers—who could be either Roman Catholics or Protestants—were usually identified as the state religions. Citizens of other religious persuasions were often discriminated against, if not persecuted outright. This religious intolerance often led to emigration.
The first Austrian immigrants on American shores, who arrived in 1734 in what is now the state of Georgia, came from the Salzburg area, where Roman Catholicism was dominant. Several hundred in number, they established a community called Ebenezer not far from Savannah. After the American Revolution (1775-1783), one of their number, Johann Adam Treutlen, became the first governor of the new state of Georgia. When U.S. president Bill Clinton later proclaimed September 26, 1997, to be Austrian American Day, he recalled the contributions of Georgia’s early Salzburger pioneers.
The second major wave of immigrants began in 1848, when a series of small prodemocracy rebellions broke out in what would become modern Austria. The suppression of these mini-revolutions led to the immigration to the United States of many of the intellectuals who had waged them. Called the “Forty-eighters,” these Austrians tended to settle in large American cities in the North and Midwest, where a number of them became active in the abolitionist movement. 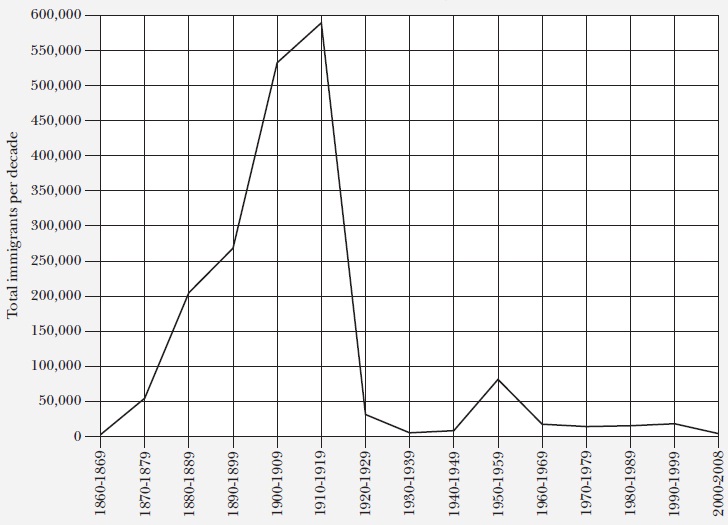 Source: Department of Homeland Security, Yearbook of Immigration Statistics, 2008. Figures include only immigrants who obtained legal permanent resident status.
The third immigration wave was the largest and took place during the first decade of the twentieth century, during which more than two million Austrians arrived on American shores, in large part because of the political and ethnic conflicts that eventually led to the outbreak of World War I. The fourth and final wave was motivated by World War II. During the years leading up to that conflict, many Austrian Jews fled their homeland to escape the Holocaust. After the war ended in 1945, more Austrians—this time from many backgrounds—immigrated to escape the desolation and disorganization left in its wake. From the mid-1930’s through the mid-1950’s, approximately 70,000 Austrians arrived in the United States. After Austria emerged as a prosperous, democratic country during the 1960’s, Austrian immigration to the United States became negligible.

From Cinema to Skiing

Austrian immigrants have proven that even a small immigrant population can strongly affect the cultural and intellectual life of America, as Austrian immigrants and Austrian Americans have been prominent in a wide array of fields. From the earliest days of motion pictures, Austrian immigrants and their offspring have been prominent in cinema. Examples include silent-screen star Ricardo Cortez, the celebrated dancer Fred Astaire, actor Peter Lorre, and legendary screen star Hedy Lamarr. During the late twentieth/early twenty-first centuries, three of the best-known actors in America were of Austrian descent: Arnold Schwarzenegger, who was a superstar during the 1980’s and 1990’s and became governor of California in 2003; Erika Slezak, of One Life to Live, who is, after Susan Lucci, perhaps the most respected and recognizable American soap-opera star; and Natalie Portman, who played Princess Amidala in the enormously popular StarWars films. Three of Hollywood’s most respected directors of the early and mid-twentieth century were of Austrian descent—Fritz Lang, Otto Preminger, and Billy Wilder. One of the most popular musicals in Broadway and Hollywood film history, The Sound of Music, is based on the true story of an Austrian family that eventually immigrated to America. 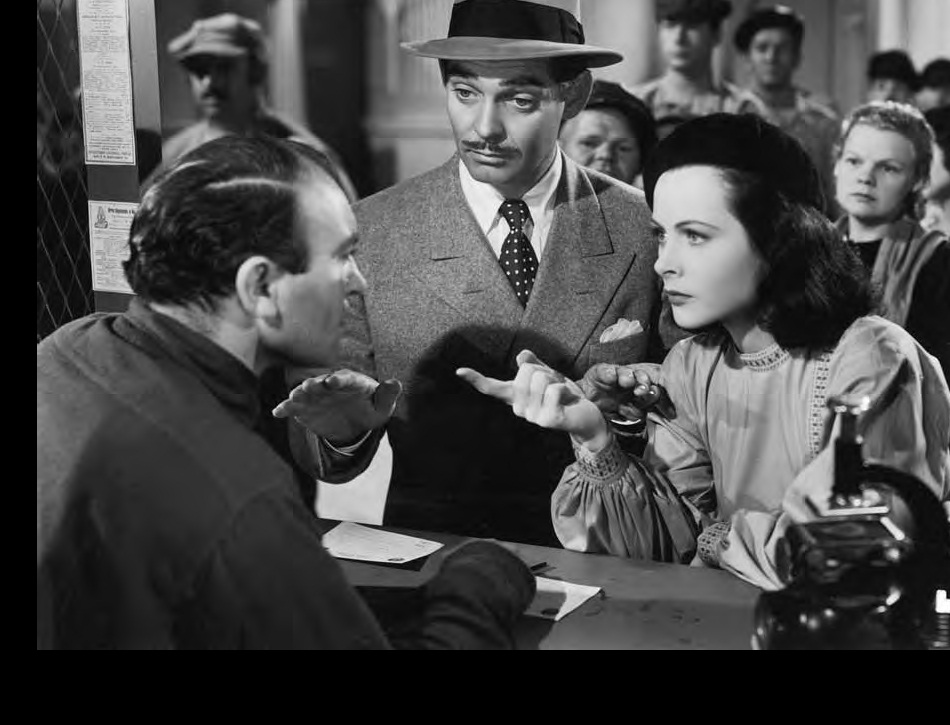 Already well known before she arrived in the United States during the 1930’s, Hedy Lamarr (right) became one of Hollywood’s most glamorous leading ladies. In 1953, she naturalized as an American citizen. This film still is from Comrade X (1940), in which she plays opposite Clark Gable (center) as a Russian streetcar conductor anxious to spread the communist message. (Time & Life Pictures/Getty Images)
Other areas of endeavor in which Austrians in America have triumphed have included law (Supreme Court Justice Felix Frankfurter), musical composing (Arnold Schoenberg and Erich Korngold), physics (Wolfgang Pauli), literature (Franz Werfel), and food preparation (Wolfgang Puck). A little-known area in which America has been greatly influenced by Austrian immigrants is that of skiing, as much of the art and practice of alpine skiing in the United States follows Austrian traditions first taught in American ski resorts by such immigrants as Hannes Schneider and Stefan Kruckenhauser.
Thomas Du Bose
Further Reading See also: Albright, Madeleine; Citizenship and Immigration Services, U.S.; European immigrants; European revolutions of 1848; Frankfurter, Felix; German American press; German immigrants; Hamburg-Amerika Line; Holocaust; Schwarzenegger, Arnold.