Aviation and Transportation Security Act of 2001

The Law: Federal legislation designed to improve the security of transportation systems throughout the United States, with particular emphasis on airport security
Also known as: Public Law 107-71
Date: Signed into law on November 19, 2001
Significance: The Aviation and Transportation Security Act was enacted following the terrorist attacks of September 11, 2001. In addition to instituting new security procedures, the act established the Transportation Security Administration to assess and amend security policies for all types of public transportation. The act made airport security and other modes of transportation the responsibility of the federal government and changed the way that Americans view travel.
Preceding the September 11 attacks, airport security was shared between airport authorities and commercial airlines. Security screening focused on searching for handguns and bombs (following the suitcase bombing of Pan Am Flight 103 over Lockerbie, Scotland, in 1988). The Aviation Security Improvement Act of 1990 and the recommendations of the White House Commission on Aviation Safety and Security (1996) were either ineffective or not implemented. Aviation security was secondary to concerns about economic efficiency, and there was a strong resistance to spending money to improve security. The FederalAviation Administration (FAA) was focused on congestion and delays in civil aviation, and Congress was attempting to reduce flight delays by requiring the airlines to provide passengers with better information and to improve baggage handling. In 1999, a Fox News survey showed that 78 percent of respondents saw poor maintenance of airplanes as a greater threat to airline safety than terrorism. Although Great Britain and Israel had created strong passengerand luggage-screening regulations, there were no such protocols in the United States.
On September 11, 2001, America’s vulnerability to terrorist attacks was exposed when four commercial airplanes were hijacked and directed toward specific targets. Two of the airplanes were flown into the World Trade Center, destroying the twin towers. The third plane hit the Pentagon, while the fourth crashed into a field near Shanksville, Pennsylvania, after passengers attempted to retake control of the plane. Nearly three thousand people were killed in the attacks. Although nine of the nineteen hijackers were given special security checks at the airports, they were not questioned or personally searched. Only their checked luggage was given an extra look.
On September 21, South Carolina senator Ernest F. Hollings sponsored an aviation security bill that was quickly discussed in both the House and the Senate. President GeorgeW. Bush, speaking in the lobby of Terminal A at Ronald Reagan Washington National Airport, signed the Aviation and Transportation Security Act (ATSA) into law on November 19, 2001.

Summary of the Aviation and Transportation Security Act

The purpose of the ASTA was to set up layers of security that would prevent future terrorist attacks. Once the ATSA became law, security in all types of transportation, including aviation, rail, other surface transportation, and maritime transportation and port security, became the direct responsibility of the federal government. The act established the Transportation Security Administration (TSA) within the Department of Transportation, headed by an undersecretary of transportation. In 2003, the TSA became a part of the federal Department of Homeland Security. Important sections of the ATSA outline procedures for hiring and training screening personnel, who must be American citizens. Rather than being hired by private companies, those screening passengers and luggage at the 429 commercial airports are federal employees. All employees and law-enforcement officers who enter a secure area of an airport must have their identities verified. The ATSA mandates that cockpit doors be reinforced and remain locked during flight, and flight crews are trained to handle suspicious travelers. Following the September 11 attacks, the number of air marshals increased from thirty-three to more than a thousand. (The exact number is classified information.)
Even general aviation was mandated to make security changes, and those running flight schools were required to enhance background checks for foreign nationals who wished to learn to fly. Communication between various agencies was improved, and a “no-fly” list—a secret watch list maintained by federal authorities to prevent those suspected of terrorist ties from boarding commercial aircraft—was expanded. Deadlines for implementing certain requirements were also set. By November, 2002, a federal workforce was to be in place to screen all airport passengers and property, and by the end of 2002 all checked luggage was to be screened for explosives.
Although the ASTA covers all modes of transportation, the resources and focus have been on aviation. Subsequent acts have developed more regulations and assigned responsibilities to other agencies to provide additional security for maritime, rail, land, and other types of transportation. 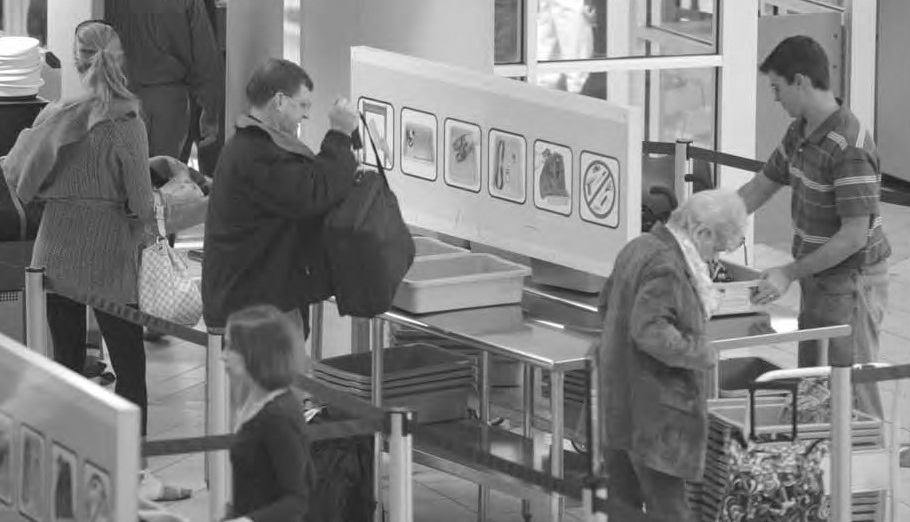 New security procedures took effect immediately after the act became law. Parking to drop off passengers was not allowed, and restrictions for carry-on luggage were implemented. Access to departure and arrival gates as well as airport concourses was restricted to ticketed passengers. Checked luggage was extensively screened, and all passengers—not just those with checked baggage—were prescreened. The Computer Assisted Passenger Prescreening System database (in place since 1997), along with the Advance Passenger Information System, provides information on potential security risks used to create a no-fly list. This list has caused problems and complaints about political and ethnic profiling. Screening of passengers at security checkpoints has also raised a number of issues, from privacy concerns regarding screening devices to complaints of racial profiling.
Despite complaints about invasion of privacy and delays with long security check-ins, most Americans accepted the provisions of the Aviation and Transportation Security Act. Travelers realized that the freedom to travel without layers of federal oversight and restrictions was lost on September 11, 2001.
Marcia B. Dinneen
Further ReadingSee also: Citizenship and Immigration Services, U.S.; Homeland Security, Department of; McCarran Internal Security Act of 1950; 9/11 and U.S. immigration policy; Patriot Act of 2001.