Significance: As skilled tradesmen and farmers, early Belgian immigrants contributed significantly to the economic development of the United States. Those who came after World War II made important contributions to the scientific and intellectual development of the country. During the seventeenth century, a small number of Belgian Protestants fleeing religious persecution in Europe immigrated to the Hudson River Valley in what would later become New York State. However, the nineteenth century was the period when significant Belgian immigration to the United States began. Due to land shortages and a potato blight in Belgium in 1840, many farmers and farm laborers came to the United States from 1840 through 1884. The Belgian government actually encouraged emigration and skilled craftsmen including carpenters, brick masons, lacemakers, and glassblowers also left Belgium to find work and improved economic conditions in the United States. 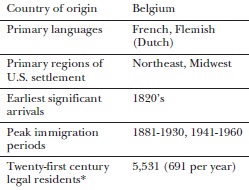 *Immigrants who obtained legal permanent resident status in the United States.
Source: Department of Homeland Security, Yearbook of Immigration Statistics, 2008.
After arriving in the United States, Belgians settled in areas where they could most easily continue to pursue the types of work they had done in Belgium. Farmers settled in the Midwest, especially in the Great Lakes area. Many Belgians settled inWisconsin, where they found an abundance of fertile farmland. Glassblowers found employment in West Virginia, Pennsylvania, Michigan, and Indiana. Many of those skilled in trades were drawn to urban areas such as Chicago and Detroit. Skilled Belgian tradesmen made significant contributions to Detroit’s becoming a major manufacturing and industrial city.
Belgians quickly established close-knit communities in which their customs and traditions thrived. The Festival of Kermiss, the traditional Belgian harvest celebration, was first observed in the United States in 1858. Since then, it has continued to be celebrated in Belgian American communities throughout rural sections of the United States. These communities also founded self-help associations to assist community members who were ill or impoverished. In addition, the associations offered health and life insurance at a low cost.
Although Belgian immigrants maintained much of the culture of their native country, they did not segregate themselves from the general American population but were willing to assimilate. Learning English and becoming active in both the social and political lives of their new country, they quickly blended into American society and suffered much less discrimination than members of many other immigrant groups. 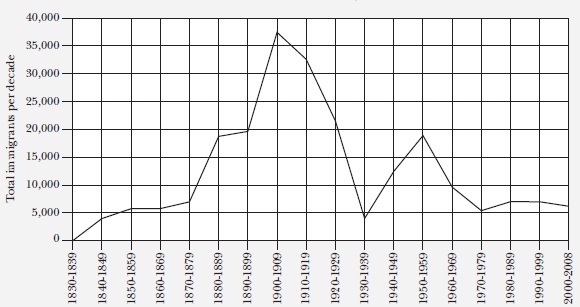 Source: Department of Homeland Security, Yearbook of Immigration Statistics, 2008. Figures include only immigrants who obtained legal permanent resident status.
After World War II, another wave of Belgians came to the United States. Unlike the earlier immigrants who were farmers, laborers, and tradesmen, these new immigrants were mostly well-educated professionals seeking employment in corporations and universities. From 1950 to 1970, few Belgians came to the United States. However; revisions in Belgian tax laws and a generally depressed Belgian economy prompted an increase in Belgian immigration for a short period during the early 1970’s. Individuals born in Belgium make up a small percentage of the late twentieth and early twenty-first century immigrant population. However, many Americans can trace their ancestry to individuals who immigrated to the United States from Belgium before 1950.
Shawncey Webb
Further Reading See also: Assimilation theories; Claiborne, Liz; Employment; European immigrants; French immigrants; Indiana; Michigan; Pennsylvania; Wisconsin.