Identification: Russian-born American songwriter
Born: May 11, 1888; Temun, Russia
Died: September 22, 1989; New York, New York
Significance: After immigrating from Russia as a child, Irving Berlin grew up in New York City, wrote songs that caught the spirit of immigrant New York, and eventually won fame for such mainstream holiday classics as “Easter Parade” and “White Christmas” and, most notably, the exuberantly patriotic “God Bless America.”
Born with the name Israel Beilin, Irving Berlin was the eighth child of a Jewish cantor, Moses Beilin, and his wife, Leah. In later life, Berlin’s only memory of his native Russia was of his home burning after an anti-Jewish pogrom. Carrying few possessions, his family left Russia and crossed Europe and the Atlantic Ocean to reach New York Harbor’s Ellis Island, where the family name was changed to Baline, on September 12, 1893. Berlin was only five years old when his family then settled in the teeming tenements of New York’s lower East Side.
When Berlin was thirteen, his father died. By then he was already earning money as a newsboy. He left home to reduce the family’s financial pressures and worked as a song plugger and singing waiter at Bowery saloons. He played the piano but used only the black keys. Eventually, he bought a transposing piano that, turned with a crank, allowed him to play in other keys. With a friend, he wrote his first lyric, “Marie from Sunny Italy” (1907). A typographical error on the sheet music changed his name from “I. Baline” to “I. Berlin.” Afterward, he went by the name “Irving Berlin.” 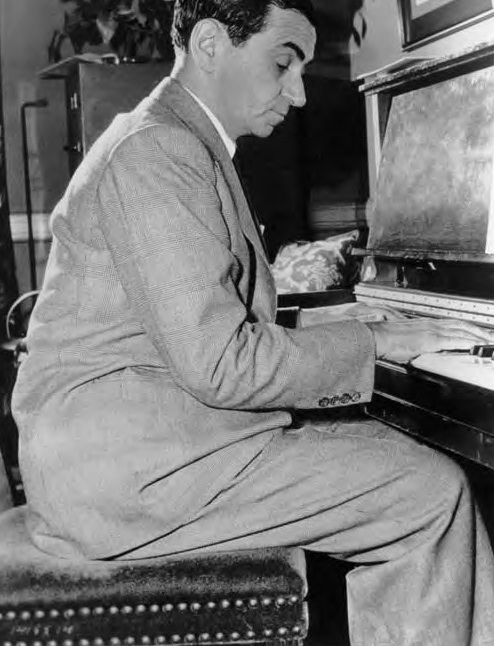 Irving Berlin. (Library of Congress)
Berlin’s earliest successes were vaudeville songs such as “MyWife’s Gone to the Country, Hurrah! Hurrah!” (1909). Many of his songs exploited the kinds of ethnic humor then popular. “Alexander’s Ragtime Band” (1911) made him internationally famous. The first all-Berlin review, Watch Your Step, starred dancers Irene and Vernon Castle. American entry into World War I in 1916 marked a turning point in his career. Shortly after he became an American citizen in February, 1918, he was drafted into the U.S. Army. He performed his military service by writing a benefit show called Yip, Yip, Yaphank that was staged with an all-Army cast. One of the songs he wrote for that show, “Oh! How I Hate to Get Up in the Morning,” became a favorite among soldiers.
During this period, Ginger Rogers and Fred Astaire performed Berlin’s songs in Top Hat (1935) and Follow the Fleet (1936). The film Alexander’s Ragtime Band (1938) contained a collection of his songs. He wrote both words and music for the honest, timeless songs that brought him lasting fame. Among the first was “When I Lost You,” (1912), wrung from him by the death of his first wife, Dorothy Goetz, soon after their marriage. Another such song was “Always,” his 1926 wedding gift to his second wife, Ellin Mackay, a wealthy Roman Catholic socialite who defied her millionaire father to marry the immigrant Jew. The headline-making marriage lasted until Ellin’s death in 1988.
After World War I, as fascism and racism gained ground in Europe, Berlin evidenced his hatred of both and his deep loyalty to America. In his 1933 Broadway review, As Thousands Cheer, African American Ethel Waters sang “Supper Time,” a bitter lament about lynching. In November, 1938, vocalist Kate Smith introduced Berlin’s “God Bless America,” which became an immediate and enduring patriotic hit. All the royalties that Berlin earned from the song went to the Boy Scouts and the Girl Scouts.
In 1942, after the United States entered World War II, Berlin created a new Army show, This Is the Army, for which he established the first racially integrated U.S. Army unit. The profits from that show and its 1943 film adaptation went to charities, and Berlin himself accepted nothing. Following Broadway performances and a national tour, the middleaged Berlin took the show’s troupe to Great Britain, Italy, and the Pacific theater of the war and continued to perform “Oh! How I Hate to Get Up in the Morning” himself.
Later film hits based on Berlin’s music include Holiday Inn (1942), Blue Skies (1946), Easter Parade (1948), White Christmas (1954), and There’s No Business Like Show Business (1954). Postwar Broadway musicals include Ethel Merman’s Annie Get Your Gun (1946) and Call Me Madam (1950), both of which were later adapted to the screen. Berlin retired during the 1960’s, recipient of many awards and honors.
Betty Richardson
Further ReadingSee also: Citizenship; Economic opportunities; Ellis Island; European immigrants; Jewish immigrants; Music; New York City; Sweatshops.