Definition: Use of minority and majority language as media of instruction in all or part of the curriculum for non-English-speaking children in elementary schools
Significance: Civil rights laws and judicial mandates during the 1960’s and early 1970’s supported the need for bilingual education as a process to instruct large numbers of U.S.- born English learners and immigrant non- English-speaking children from Latin America, Southeast Asia, and other regions.
The influx of immigrant groups into the United States since the early colonial period long required that non-English-speaking newcomer children receive instruction in their home language. During the eighteenth century, school instruction throughout what is now Pennsylvania, Virginia, Maryland, and North and South Carolina was delivered in German, often to the total exclusion of English. Bilingual schools were also provided for the French students in Louisiana and Spanish-speaking children and other groups in early southwestern regions of the United States. Ethnocentric attitudes by English-speaking groups toward immigrants mainly from southern and eastern Europe and later Latin America and Asia displaced what had been a tradition of flourishing bilingual education.

In early colonial America and through the late nineteenth century, there were no legal restrictions that prevented schools for immigrant students from using native (non-English) languages for instructional purposes. There were laws that required the teaching of English, but no explicit requirements that outlawed teaching in other languages. Communities chiefly in rural agrarian enclaves in early America wielded major control over their schools with little or no intervention from central legislative or administrative agencies. This allowed German settlers, for example, to preserve German schools, as in Pennsylvania, where they represented a third of the colony’s population.
After the 1803 purchase of the Louisiana Territory by the United States, Louisianans used French extensively in government affairs and in social circles. Louisiana’s 1845 constitution allowed the legislature to operate bilingually. A subsequent 1847 law authorized bilingual (French and English) instruction in the schools. As U.S. punishment for Louisiana’s role in the Confederacy, the use of French in government and in the schools was banned. Neverthless, dialectal variations of the French language could be found during the early twenty-first century among Cajun and Creole communities, just as the Amish people in Pennsylvania continued to use German.
Conquered Spanish-speaking groups in Texas, New Mexico, California, and other southwestern states after the Mexican War ended in 1848 initially experienced the same fate as the French speakers of Louisiana. A school law in New Mexico recognized the use of Spanish and English in the public schools. In 1850, the year California became a state, 18 percent of all education was private and Roman Catholic. Many of the children were of Spanish and Mexican descent and were taught in the Spanish language by priests.
Soon after Texas became a state in 1845, Czech, German, Polish, and Dutch settlers joined with the more established Spanish-speaking Texans, known as Tejanos, whose roots in the state dated back to the time of Spanish domination. Early German communities are credited with establishing one of the first bilingual schools in Texas, the German- English School, founded in 1858. Located in San Antonio, this school not only was successful in providing instruction in German and English but also later adopted Spanish as a studied language. The small town of Panna Maria, Texas, was home to a large number of Polish immigrants who founded St. Joseph’s Catholic School, an early testament to the bilingual tradition.Without a legal structure or central bureaucracy to control curriculum content and language requirements for schools, the Tejanos also were successful in establishing their own community-based educational institutions, such as the Concepción School of Duval County, founded in 1870.
Native American groups, such as the Cherokee, used bilingual materials to such an extent that Oklahoma Cherokees had a literacy rate in English superior to that of the white population of either Texas or Oklahoma. The literacy in native language among this indigenous people is reported to have exceeded 85 percent during the nineteenth century.

The advent of centralized control of education as evidenced by the proliferation of state regulatory agencies for education throughout the country during the early twentieth century and the movement toward a nationalistic policy in the United States led quickly to a nationwide imposition of English-only instructional laws. The curriculum that sprang from the 1918 English-only law dictating the use of English in all Texas public schools was the beginning of a statewide effort to Americanize the immigrant groups, including the Spanish-speaking Tejano community. At the same time, there was an attempt to unify statewide education policy. Interestingly, the Texas English-language policy was not aimed at the large Spanish-speaking community but instead at the German-speaking citizens of the state. German Americans bore the brunt as targets of retaliation throughout the country because of Germany’s adversarial stance against the United States in World War I. The huge wave of Italians, Polish, Czechs, and other groups immigrating to the United States from southern and eastern Europe during the Industrial Revolution further exacerbated the rift between the majority population and minority language groups and committed the nation even more aggressively to assimilationist practices.
This pattern of state governments’ enactment of English-only laws and efforts to integrate all non- English groups began during the late nineteenth century, when Wisconsin and Illinois approved policies for both public and church-operated schools requiring exclusive English instruction. Foreign language classes were exempted from the rule. Efforts to encourage assimilation became progressively coercive. In extreme imposition of the English-only laws, schools meted out various forms of punishment to nonconforming students. In Texas and other southwestern states and in Indian boarding schools, students caught speaking Spanish or native American languages in the schools were fined or physically punished for violating the English-only rule. These “melting pot” dictums were applied with such vigor that many non-English-speaking children, such as those of Mexican American descent, often had to spend as many as three years in the first grade learning English. Educators too were subject to the punitive provisions of the law. Teachers who violated the policy risked losing their teaching certificates. 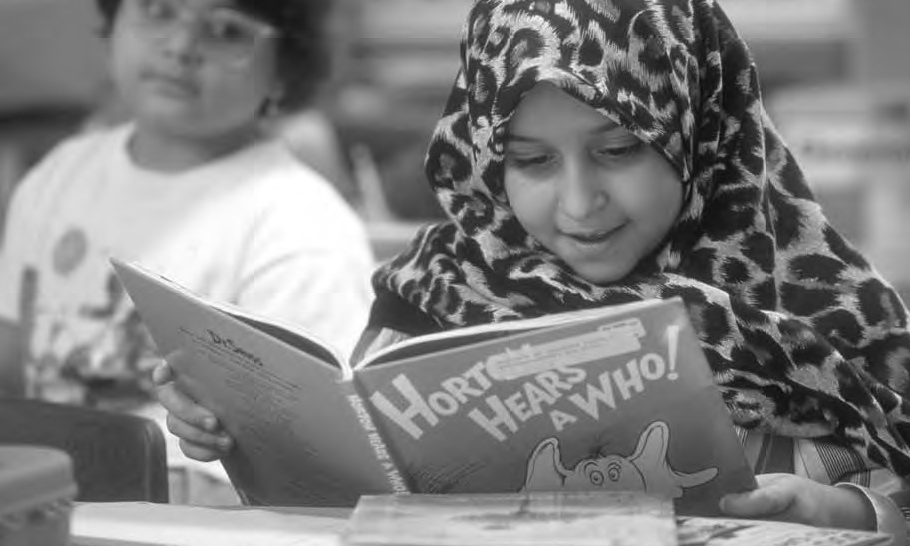 The English-only rule and other culturally exclusionary acts of the schools were at the heart of grievances driving the Civil Rights movement of the 1960’s and 1970’s. The hostile conditions of the monolingual schools, for example, were often cited by Chicano and Puerto Rican civil rights activists as inextricably connected with the poor academic achievement, low self-concept, and alienation of many of the minority-language student groups affected by the English-only restrictions. It was during this same period that segregated schools for African American children were declared unconstitutional by the U.S. Supreme Court and equality of educational opportunity for ethnic minority students evolved as a desirable goal for public education. Bilingual education emerged as an alternative to English-only education and was promulgated as a way to promote equity and justice in schools for language-minority students.
The signing of the Bilingual Education Act (Title VII of the Elementary and Secondary Education Act) in 1968 by President Lyndon B. Johnson was pivotal in making possible the return of bilingual education to the public schools. This was the first federal recognition that limited-Englishproficient (LEP) children have special educational needs. The act initially targeted Mexican Americans, Puerto Ricans, Cubans, and other Latino minorities. These groups constituted increasingly large, poor, and working-class populations within the school systems of such U.S. urban centers as Los Angeles, New York, San Antonio, and Miami. Judicial support of the Bilingual Education Act was strengthened when in 1974 the U.S. Supreme Court ruled in Lau v. Nichols that LEP children could receive instruction in their native language while learning English. Equally significant was the 1982 Plyler v. Doe Supreme Court decision that allowed undocumented children “free access to public education.”
Immigration into the United States primarily from developing countries since the mid-1980’s has heavily affected the public schools and created the need for expanded bilingual and English as a second language (ESL) programs. Aided by the new and more liberal provisions of the 1965 immigration policy, coupled with cycles of national economic prosperity, immigration in the past thirty years has produced profound demographic changes in the United States. In particular, the foreignborn, non-European population has increased significantly.
Although immigrants have come to United States from virtually every corner of the world, Mexico and Spanish-speaking countries in Central America have dominated U.S. immigration. The impact of Latinos has been especially felt in public education. This group accounts for the largest enrollment increase in the schools since the early 1990’s. These are children who are, for the most part, limited- or non-English proficient and account for the greatest number of English learners in bilingual and ESL education. While Spanish is the mother tongue of three in four English learners in bilingual and ESL programs, other languages spoken by elementary and secondary students include Vietnamese, Hmong, Cantonese, Korean, Haitian, Russian, Creole, Arabic, Urdu, Tagalog, Mandarin, Serbo-Croatian, Lao, Japanese, Armenian, Polish, and Hindi. California, Texas, New York, and Florida, states with the greatest concentration of immigrants, have each reported more than one hundred different language groups in the schools.

Increases in the numbers of both documented and undocumented immigrants and concomitant growth of publicly funded services, including bilingual and ESL programs for newcomer group children, have fomented rising opposition to special language programs for and treatment of immigrant groups. English-only campaigns have targeted primarily the large immigrant population of Latinos, seeking to establish English as the official U.S. language and to forbid the use of Spanish and other non-English languages in government and education. Approval of English-only laws has met with some success. Sixteen states and many local municipal and county governments throughout the United States have enacted policies that prohibit the use of languages other than English by government agencies. In some states, these language- restrictive laws were passed during the early twentieth century, during upsurges of nativist sentiments. The rise of modern-day English-only initiatives has stirred anxieties about bilingualism and doubts about the merits of bilingual education. Bilingual education in particular is viewed by the English-only law advocates as an obstacle for immigrant children in learning English, thereby severely retarding their assimilation into mainstream U.S. society.
Proponents for greater linguistic and cultural tolerance, such as the American Civil Liberties Union (ACLU) and language rights groups, argue that the “sink or swim” English-only experience of past immigrants was detrimental to their success in school. In 1911, the U.S. Immigration Service found, for example, that 77 percent of Italian, 60 percent of Russian, and 51 percent of German immigrant children were one or more grade levels behind in school compared to 28 percent of U.S.- born white children. English-only laws, according to the ACLU of Florida, “disparage the immigrants’ native languages [and] assault the rights of the people who speak the languages.”
One of the principal advocates for immigrant and U.S.-born language-minority students is the National Association for Bilingual Education (NABE). Since its founding in 1976, NABE has confronted political attacks on language-minority communities, such as the English-only movement and anti-bilingual education initiatives. The organization has advocated for strong civil rights policies and aggressive enforcement of the Lau v. Nichols decision.
Rudy Rodríguez
Further Reading