The Event: Construction of barriers to prevent undocumented immigrants and potential terrorists from entering the United States along its southern border
Date: Construction began in 1994
Location: U.S.-Mexico border
Significance: The congressional decision in 2006 to build hundreds of miles of additional fencing along portions of the 1,951- mile U.S.-Mexico border touched off a diplomatic dispute with Mexico, angered Latino communities in the United States, and was almost unanimously condemned by human rights organizations, who believed the policy would result in a large number of deaths among immigrants seeking to enter the country via its more dangerous but as yet unfenced stretches of borderland.
The tightening of the border with Mexico was begun during the mid-1990’s in response to the drug trade and the growing number of illegal immigrants entering the United States. Containing the latter quickly became a security concern in the aftermath of al-Qaeda’s attack on theWorld Trade Center and Pentagon on September 11, 2001. After five years of congressional debate, the construction of an additional 850 miles of barriers along the U.S.-Mexico border was authorized in the Secure Fence Act of 2006.

Although the terminology evokes images of a conventional, high, and possibly barbed-wire fence stretching across the border separating Mexico from California, Arizona, New Mexico, and Texas, the “fence” that has been erected and that remains to be completed is as varied as the landscape along the border. A substantial portion consists of walls as well as border control points and obstacles to vehicle movement constructed where major highways link Mexico to such metropolitan areas as San Diego. Other sections include pedestrian barriers— often parallel walls separated by “no-go” zones—but many segments are or will be of a “virtual” electronic variety, using cameras, motiondetection devices, and observer personnel to monitor the border.
To a significant degree, the form of the border fence and its pace and site of construction have been determined by the border landscape. The more desolate and dangerous the area on the U.S. side of the border, the lower the priority to fence it immediately. The first barriers were thus erected near the urban areas that beckoned drug dealers and illegal immigrants. In 1994, the administration of Bill Clinton launched Operation Gatekeeper to construct a barrier along a fourteen-mile stretch south of San Diego. Similarly, most of the nearly five hundred miles of border that were covered by either pedestrian or vehicle border barriers by the end of 2008 lay along the zones nearest to the United States highway network, not the long stretches of desert borderland. 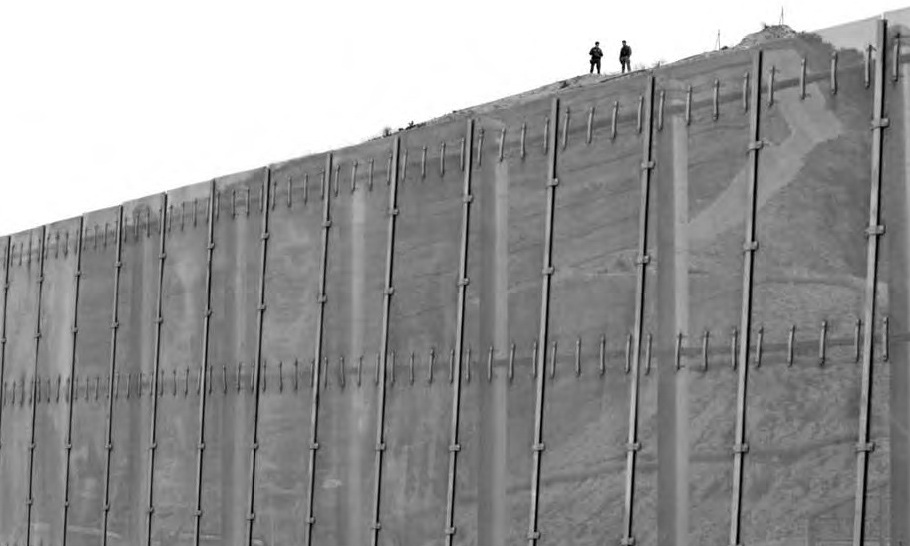 Assessments of the success of the fencing operation in controlling illegal immigration have been mixed, although most concede that the U.S.- Mexico border has become one of the most challenging law-enforcement areas in North America. There, bandit gangs in Mexico, volunteer spotters from right-wing groups in the United States, paid smugglers of human cargo (the armed “coyotes”), drug dealers, impoverished Mexicans living in shantytowns just south of the border, Mexican authorities, and 90 percent of the U.S. Border Patrol (nearly ten thousand agents), augmented by National Guard troops, coexist and often collide.
Increased surveillance and fencing on parts of the border has affected the pattern of illegal immigration. Many would-be immigrants have been forced into entering the United States by way of the often lethal, less monitored desert access points, and thousands have died in the fifty-mile trek necessary to reach roadways. For those choosing the less dangerous crossing points, interdiction has become easier given the combination of high physical walls, cameras, and sensors lining those areas. Furthermore, the rate of illegal immigration did seem to slow in 2008, although it was not clear whether it was a result of the increasing number of fenced miles or the fact that a U.S. economy in recession discouraged many from seeking employment north of the border.
The principal indictment of the fence is that it constitutes too little, too late. By the time the Secure Fence Act was passed, it was conservatively estimated that there were at least 12 million illegal immigrants in the United States, nearly 60 percent of whom were Mexicans. Moreover, the same year that the Secure Fence Act passed, the governors of New Mexico and Arizona declared states of emergency on the grounds that their states were suffering significant financial hardship because the federal government had failed to control the drugs and illegal immigrants entering them from Mexico. Meanwhile, as the illegal immigrants spread across the country, by approximately the same time forty-three states had legislation pending that was designed to limit illegal immigrants’ access to employment, education, and social welfare benefits.
Joseph R. Rudolph, Jr.
Further ReadingSee also: Border Patrol, U.S.; Drug trafficking; Homeland Security, Department of; Illegal immigration; Illegal Immigration Reform and Immigrant Responsibility Act of 1996; Mexican immigrants; 9/11 and U.S. immigration policy; North American Free Trade Agreement; Texas.