In 1904, during Theodore Roosevelt’s presidential administration, the U.S. commissioner general of immigration assigned mounted inspectors to patrol the U.S.-Mexican border. The federal government initially hired only seventy-five men to patrol the nearly two-thousand-mile-long southern border of the United States, riding horses that themen personally owned.With occasional exceptions, this work was relatively uneventful over the next decade and a half, but it changed forever at midnight January 16, 1920. At that time, the Eighteenth Amendment to the U.S. Constitution went into effect prohibiting the sale, importation, manufacture, and transportation of all alcoholic beverages.
With the onset of Prohibition, foreign borders became important routes for smugglers willing to stop at nothing to get their illegal products to their destinations. The smuggling of alcohol into the United States became a hugely profitable criminal enterprise during the 1920’s. Not surprisingly, dealing with smugglers soon became a major problem for the badly outnumbered mounted border inspectors. To deal with the problem, Congress passed the Labor Appropriation Act on May 28, 1924. That law officially established the U.S. Border Patrol as a federal law-enforcement agency.
In 1925, Congress expanded the mission of the Border Patrol to include protection of Florida’s long shoreline and the region along the Gulf coast. The government then recruited 450 new Border Patrol agents and assigned most of them to the long Canadian border to stop the smuggling of illegal liquor into the United States from the north. Confronted by this strengthened Border Patrol presence on the Canadian border, many bootleggers shifted their smuggling operations to the Mexican border. Many of them used mules to carry alcoholic beverages directly across the Rio Grande. Meanwhile, the federal government also became concerned with increased smuggling of undocumented immigrants into the United States for profit. To deal with all these challenges, the Border Patrol continued to hire more agents.
In 1933, President Franklin D. Roosevelt recombined the Bureau of Immigration and the Bureau of Naturalization into the Immigration and Naturalization Service (INS), under which the Border Patrol officially fell. Late the following year, the first Border Patrol Academy opened in, El Paso, Texas. In 1940, the Immigration and Naturalization Service was moved from the Department of Labor to the Department of Justice. Immediately afterward, 712 new agents were added, raising their total number to more than 1,500 officers.
During World War II, the Patrol played an integral role in national security by guarding alien detention camps, protecting diplomats, restricting border immigrant entries, and working with the U.S. Coast Guard to secure the nation’s borders and coasts against potential enemy combatants. Border Patrol agents had long used both horses and motorized vehicles with radios to patrol the borders. During this period, aircraft were added and quickly became an essential part of Border Patrol security operations.
Meanwhile, the jurisdiction of the Border Patrol continued to expand. In 1952, agents were first permitted, for the first time, to board and search transportation vehicles for illegal immigrants anywhere within the United States, not just along the borders. As the nation continued to grow, so did the staffing levels investigative and patrol efforts of the agency. By the turn of the twenty-first century, the Border Patrol had evolved into one of the nation’s most important federal law-enforcement agencies. 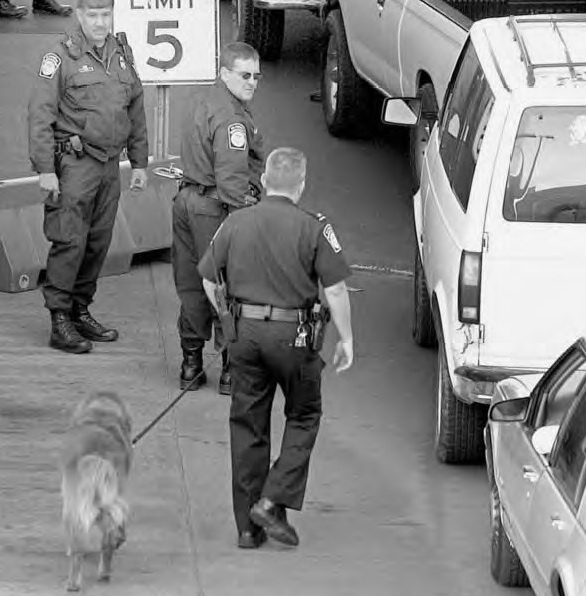 Border Patrol officers inspecting vehicles entering the United States from Mexico at Nogales, Arizona, in early 2005. Since the Border Patrol was placed under the new Department of Homeland Security in 2003, inspections at border crossings have become more intensive—along both the Mexican and Canadian borders. Inspectors are making increasing use of technology in their work and still use dogs trained to sniff out drugs and explosives. (AP/Wide World Photos)

Throughout its history, the Border Patrol has continued to change dramatically. However, its chief mission has always been to detect and deter aliens attempting to enter the United States illegally. In cooperation with law-enforcement officers from such federal agencies as U.S. Customs, Immigration and Naturalization (INS), and the Department of Agriculture, Border Patrol agents have helped to maintain operational entry points into the United States and to facilitate the entry of legal immigrants and goods while preventing the illegal trafficking of people, drugs, and other types of contraband.
In addition to managing legal entry points along the borders, the Border Patrol has been responsible for patrolling the nearly six thousand miles of the Mexican and Canadian land borders and more than two thousand miles of coastal waters surrounding Puerto Rico and Florida’s peninsula. Many agents work in isolated regions, often in difficult terrain and extreme weather conditions.
By the year 2009, the Border Patrol had experienced massive growth. After starting with only a handful of mounted agents who patrolled uninhabited areas along U.S. borders, the agency expanded to employ more than seventeen thousand agents and more than three thousand support personnel. Much of this growth took place after the mid-1990’s, as Congress increased the agency’s funding to improve border security. Along with its increased funding, the Border Patrol was required to gives its agents nineteen weeks of training at its academy in Artesia, New Mexico, which is affiliated with the Federal Law Enforcement Training Center (FLETC) located in Glynco, Georgia.
The Border Patrol accomplishes its primary mission of preventing immigrants from entering the United States illegally through several means: Other major activities that agents carry out include conducting city patrol and transportation checks, investigating drug and contraband smuggling operations, and conducting traffic checkpoints along highways leading from border areas. During the decade leading up to 2009, agents apprehended nearly 13 million aliens attempting to enter the United States illegally. This number is especially impressive in view of the many deserts, canyons, and mountains straddling the borders. Border Patrol police work differs from that of typical urban police officers in large part because of the added dangers of wildlife and harsh weather conditions. To make accomplishing their difficult mission possible, Border Patrol agents make extensive use of such high-tech equipment as electronic sensors, video monitors, and night vision scopes to detect people crossing the borders. Meanwhile, agents continue to patrol the borders on foot, on horseback, and in various types of vehicles including suburban utility vehicles, snowmobiles, allterrain vehicles, boats, airplanes, and helicopters. They also use unmanned aerial vehicles operated by remote control computers.
Paul M. Klenowski
Further ReadingSee also: Border fence; Bureau of Immigration, U.S.; Citizenship and Immigration Services, U.S.; Coast Guard, U.S.; Drug trafficking; El Paso incident; Homeland Security, Department of; Immigration and Naturalization Service, U.S.; 9/11 and U.S. immigration policy; Patriot Act of 2001.