Identification: Capital and largest city of Massachusetts and one of the most important cities on the Atlantic seaboard since early colonial times
Significance: During the nineteenth and early twentieth centuries, Irish and Italian immigrants significantly changed the political, religious, and cultural life of the predominantly Anglo-Saxon Protestant city of Boston. In the early twenty-first century, Roman Catholics make up Boston’s largest religious community, and the Irish play a major role in Boston politics. Non-European immigrants have transformed Boston into a racially diverse city with a significant minority population.
From its founding by Puritans in 1630 until 1845, Boston was a port city dominated by what were called the Brahmins: a community of Englishdescended Protestants. The city was a financial and business center with little indigenous industry or agriculture to attract immigrants. After the American Revolution, prospective settlers of the new country, arriving with dreams of land ownership, bypassed Boston because of its lack of space.

The economic and political environment in Ireland—widespread evictions and the potato famine beginning in 1845—created the conditions necessary for the first large immigrant group to remain in Boston. Irish immigrants were too financially drained by the cost of transportation to move on once they reached Boston. The dramatic influx of Irish immigrants—the Irish population in Boston grew from four thousand in 1840 to more than fifty thousand by 1855—permanently changed the city socially, culturally, and economically. Cheap Irish labor transformed Boston from a commercial to an industrial economy, with the native Bostonians reaping the benefits as owners, while low wages left the Irish crowded into the city’s first tenements. There were cultural conflicts with the native Bostonians, especially over religion, since the vast majority of the Irish were Roman Catholic, while the Brahmins were Protestant, and politics, since the Irish tended to be labor-oriented Democrats, while the Brahmins tended to be business-oriented Republicans.
By 1880, a new native-born generation of Irish descendants had a secure place in the community while retaining a distinct group identity. Some Boston neighborhoods such as South Boston and Charlestown continue to be largely Irish in character, with such events as the annual St. Patrick’s Day parade becoming a permanent part of Boston’s culture. The Catholic Church in Boston is influential and retains an Irish flavor in spite of the presence of Italian, French, and German Catholics. Perhaps most important, by the early twentieth century Boston politics was dominated by the Irish, who contributed such figures as Mayors John F. Fitzgerald and James Michael Curley and President John F. Kennedy.

North End and the Italian Presence

The North End, one of Boston’s oldest neighborhoods, had been predominantly Irish for two generations. At the end of the nineteenth century, conditions in eastern and southern Europe stimulated two new groups of non-English-speaking immigrants: the Jews and the Italians. By 1895, the North End was dominantly southern Italian, with Russian and Polish Jews close behind in numbers.
The Jewish immigrants considered education essential for social integration and economic advancement. (The North End’s Eliot School was two-thirds Jewish in 1906.) They were oriented toward business, opening retail stores and small businesses of all kinds, and moved into the mainstream of commercial and education-oriented Boston fairly rapidly. The North End, which remains Boston’s Little Italy, was 90 percent Italian in 1920.
The southern Italians, like the Irish before them, arrived in Boston with little money and few prospects and found work in the factories and on the docks. In the North End, they created a community that was similar to an Italian village. Italian culture— street corner and café life, restaurants and markets specializing in Italian ethnic foods such as pizza and pasta, the religious feste, or feasts, with processions and a festival atmosphere on summer evenings—was introduced to Boston. By 1910, the Italian influence in the Massachusetts legislature had instituted the Columbus Day holiday. Since the second half of the twentieth century, several Massachusetts governors and Boston mayors have been of Italian descent. Today, Boston is as Irish and Italian in flavor as it is Brahmin. 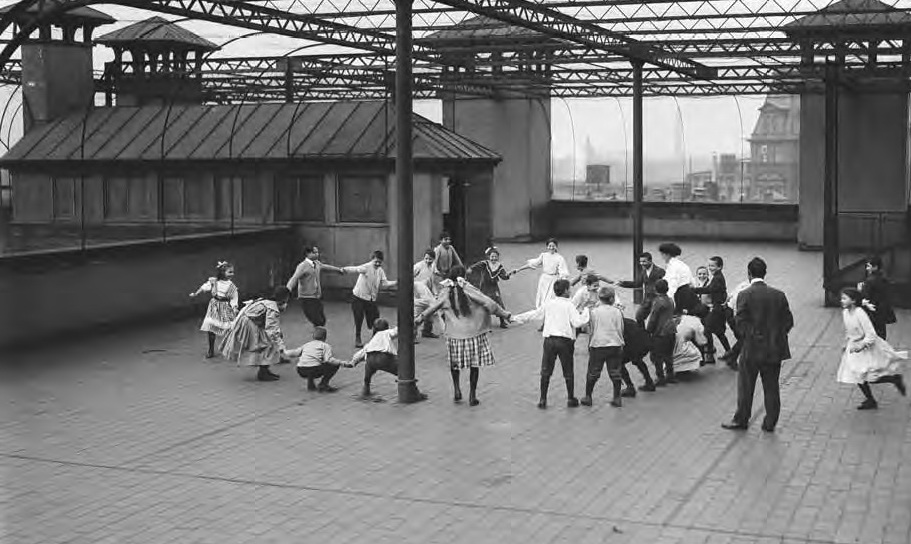 Immigrant children learning to play American games on the roof of Boston’s Washington School in 1915. (Library of Congress)

In 1965, a new Immigration and Nationality Act lifted the restrictive quotas of the 1924 National Origins Act. In Boston, the numbers of foreignborn residents and their children rose dramatically until the immigrant community would make up more than one-third of the population. A substantial number of the new wave of immigrants originated in the Caribbean, Latin America, Africa, and Asia, changing Boston to a racially diverse city. The new immigrants came from a wide variety of countries. Soviet Jews, Vietnamese, Cambodians, Salvadorans, Haitians, Dominicans, Brazilians, and Colombians, as well as Indians, Chinese, Cape Verdeans, and Africans all flocked to a Boston that was known as a center of educational opportunity and economic prosperity.
Susan Butterworth
Further ReadingSee also: Antin, Mary; Asian immigrants; Haitian immigrants; Immigration Act of 1924; Immigration and Nationality Act of 1965; Irish immigrants; Italian immigrants; Jewish immigrants; Latin American immigrants; Little Italies; Massachusetts.