B’nai B’rith (Children of the Covenant)

B’nai B’rith is the largest Jewish service organization in the world, with 500,000 members in some 58 countries. It has traditionally promoted greater understanding of Jewish culture, a heightened sense of Jewish identity, and protection of human rights generally. Its major component organizations include the Hillel Foundation for college students, the Anti-Defamation League (ADL), and B’nai B’rith Women. The organization was founded by 12 German Jewish Americans in New York City in 1843 in order to protect Jewish rights around the world and to serve the greater needs of humanity. It became active in Canada in 1875. During the 19th century, members spoke out against the threatened expulsion of Jews from several states during the Civil War, raised money for cholera victims in Palestine, and raised awareness of the persecution of Jews in Romania and Russia. In the 20th century, the organization became more directly involved in public policy, especially through the activities of the ADL. B’nai B’rith regularly monitors the activities of the United Nations and the European Union and has played a significant role in bringing Nazi war criminals to justice. The organization also funds a wide variety of humanitarian projects, include disaster relief, feeding of the hungry, and literacy programs. B’nai B’rith furthers its agenda through an extensive program of speaking and publication, including the International Jewish Monthly. 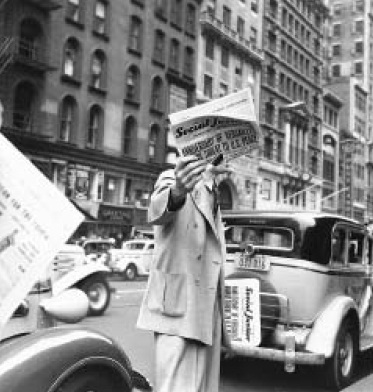 The newspaper Social Justice, founded by Father Charles Coughlin, railed against the “British-Jewish-Roosevelt conspiracy.” His strongly anti-Semitic message earned him 30 million radio listeners in the mid-1930s, the largest radio audience in the world, and pointed to the need for organizations like B’nai B’rith. (Photo by Dorothea Lange, 1939/Library of Congress, Prints & Photographs Division)