Significance: Economic and political instability in Brazil during the late twentieth century prompted unprecedented emigration fromthe country. Approximately one million Brazilians came to live in the United States. Many of these immigrants took jobs in service industries in northeastern metropolitan areas, southern Florida, and California. Mostly members of the middle and upper classes in their native country, they came primarily from the Europeanized southern areas of Brazil.

The first Brazilians to enter what is now the United States may have been a group of Sephardic Jews who arrived in 1654. Calculating the number of Brazilians in the United States is speculative.With a sparse migration history, they have been ambiguously identified by immigration agencies as “Hispanic,” “Latino,” and “South” or “Latin” American. The U.S. Census Bureau first listed a category for Brazilians residents in 1960, calculating under thirty thousand. Until the 1980’s, no more than a few thousand entered annually. 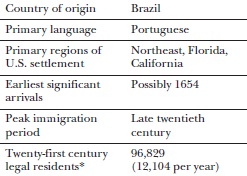 The 1980’s saw a gargantuan swell of immigrants seeking economic opportunity and fleeing social decay. During that decade, Brazil suffered hyperinflation that paralyzed its economy, causing unemployment to soar. Moreover, an authoritarian military government was replaced by a democratic civilian administration. These factors prompted numerous middle- and upper-class Brazilians to emigrate, primarily to Europe and the United States. By the end of the twentieth century, approximately two million Brazilians had migrated abroad, more than 1 percent of the national population.

Brazil is a country of richly mixed African, European, and indigenous ethnicities. However, the Brazilians most likely to emigrate were from the European-heritage southern parts of the country. They settled in northeastern U.S. states with Portuguese-speaking communities, East Coast metropolitan areas with varied job opportunities, and in parts of California and southern Florida with climates similar to those of their homeland. California and Florida tended to attract upper-class Brazilians with professional and artistic ambitions. About 100,000 Brazilians lived in New York City, forming a Little Brazil neighborhood in mid-Manhattan, where the monthly tabloid newspaper The Brasilians was launched. 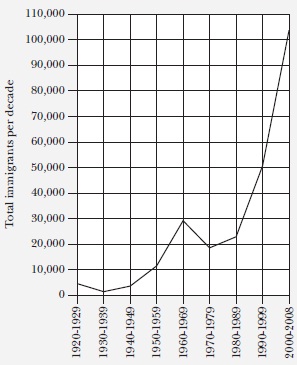 At the beginning of the twenty-first century, approximately one million Brazilians lived in the United States. However, that figure is merely an estimate because as many as one-third of the Brazilian immigrants enter the United States without documentation to evade quota restrictions. One city in central Brazil became notorious for sending clandestine immigrants, who settle mostly in New Jersey and work shoeshine services.

Middle-class Brazilians who have settled in the United States may decline in social status, working in restaurants and housecleaning jobs; but they improve economically relative to Brazil, sending back remittances to their families. Economic and political conditions have greatly improved in Brazil during the twentyfirst century so that the impetus for immigrating has declined. At the same time, since the terrorist attacks on September 11, 2001, U.S. immigration and police agents are more vigilant regarding illegal immigrants. Thereby, uncertain legal status and marginal socioeconomic status has prompted many Brazilians to return to Brazil.