Burmese have made up only a small portion of the Asians who have immigrated to the United States, and an overwhelming majority of them have come as refugees. Their homeland, now called Myanmar, is approximately the size of Texas, with the Himalayas along its northern and western borders, and the Indian Ocean and the Bay of Bengal to the south. This geography influenced the development of eight major ethnic groups. During the age of European imperialism, Great Britain fought to colonize the region and came to power there in 1885. The British had a significant impact on the Burmese. The groups who lived in the country’s great valley region—Burmans, Mon, Rakhine, and Shan—lived under a British civil system. The ethnic minorities who lived in the mountains—Chin, Kachin, Karen, and Wa—maintained their traditional tribal systems, in which local chieftains retain their authority. This distinction in government systems fostered a gap between the country’s ethnic groups, as the valley peoples had opportunities for modern education andWestern customs, while the mountain peoples had limited educational opportunities and resources. The peoples in urban centers practiced Theravada Buddhism, while Christian missionaries served in rural areas and converted many Buddhists and animists to Christianity.

During the 1940’s, an independence movement arose in colonial Burma under the leadership of Aung San. He wished to unify the ethnic groups but was assassinated in 1947. In January, 1948, Burma achieved its independence but remained in civil unrest for many years. In 1962, Ne Win seized power. Ruling by military force, he imposed a socialist government. He destroyed many rural villages and suppressed ethnic minorities.

Many Burmese who opposed the new regime began emigrating to the United States. This movement began slowly, with approximately 10,000 Burmese arriving in the United States before 1980. The pace of Burmese immigration accelerated during the last two decades of the twentieth century. However, after the terrorist attacks on the United States of September 11, 2001, the numbers fell as the U.S. government tightened on immigrants from Myanmar, whose government was regarded as a terrorism threat. It was not until 2006 that more immigrants began arriving from the region. 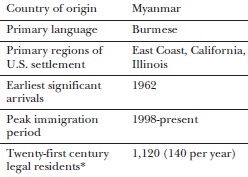 Burmese in the United States

Most Burmese immigrants have come to the United States as refugees. Many lived in refugee camps on the border with Thailand for significant periods before moving on to the United States. The immigrants have tended to settle in such major metropolitan areas as New York City, Los Angeles, Chicago, and Washington, D.C. Many refugee children have arrived in the United States with no experience of living anywhere other than in the camps and have limited education. In contrast, members of the older generations have been comparatively well educated; approximately threequarters of them at least have the equivalent of high school diplomas. They have a strong work ethic and are eager to gain employment.

By the year 200, only about 48,000 Burmese immigrants were living in the United States. Because of their small numbers, they have had limited opportunities for cultural networking. Few people outside their group speak Burmese, and the demand for publications in Burmese is limited. Moreover, individual Burmese tend to identify themselves primarily as members of their individual ethnic group, rather than as Burmese or Myanmar nationals.