Significance: California began drawing large numbers of immigrants only since its great gold rush began in 1848. That era brought in large numbers of French, German, Italian, British, Chinese, Filipino, and Mexican immigrants. Since that time, constantly changing immigrant communities have contributed enormously to the state’s development.

One of the most populous subnational entities in the world, California is also ethnically very diverse, thanks to a century and a half of heavy immigration. The first major influx of immigrants occurred with the California gold rush, which attracted people hoping to strike it rich from Europe, China, Australia, and the rest of the United States. The first transcontinental railroad, which connected California with the eastern states, was built primarily by Irish and Chinese laborers. During the twentieth century, Filipino and Mexican immigrants began playing a big role in the state’s huge agricultural industry.

Gold Rush and the Transcontinental Railroad

On January 24, 1848, James W. Marshall discovered gold at Sutter’s Mill, near Sacramento, California. Soon, tens of thousands of immigrants from around the world traveled to California hoping to find wealth in the mines or to take advantage of the burgeoning business opportunities in the freespending gold rush economy. Most of these immigrants came in 1849. Known as “Forty-Niners,” they comprised Australians, New Zealanders, Mexicans, Germans, Italians, Britons, French, Latin Americans, and others. This period also saw the first major influx of Chinese workers into California— both as miners and as merchants and as other types of laborers. Chinese workers would provide a cheap labor pool for the state for decades to follow. 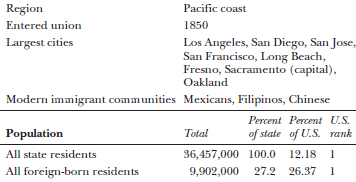 The first transcontinental railroad made immigration to California easier and more attractive. The railroad ran from Council Bluffs, Iowa, and Omaha, Nebraska, to Alameda, California, linking the Atlantic and Pacific coasts by rail for the first time. The railroad was divided into Union Pacific (westward) and Central Pacific (eastward) lines, both of which were built primarily by immigrant labor. The Central Pacific line began with Irish laborers, but due to a labor shortage in California and a downturn in mining, the railroad turned to Chinese miners and other immigrants. More than ten thousand Chinese workers were drafted to railroad work. By the second year of construction, nine of ten railroad workers were Chinese. The work was difficult, as it required carving a track through the rugged Sierra Nevadas; only fifty miles of tracks were laid during the first two years. The work was also dangerous. During one winter season in the late 1860’s, almost half of the three thousand workers tunneling through the summit of the Sierra Nevadas were killed by explosions, avalanches, and other accidents.

Most of the Chinese immigrants were married men who had come to California for mining, agriculture, and other work and intended to return to China. Chinese railroad workers were poorly paid and expected to work twelve hours a day, six days a week, but many managed to set aside enough money to buy land later. The need for railroad workers grew, and the railroad company imported more from China. The newer workers were paid less than those already in California, and all the Chinese immigrants were treated poorly. They were expected to work longer hours than the white laborers, and were often beaten or prevented from seeking other employment. In 1867, approximately two thousand railroad workers in the high Sierras went on strike, asking for more pay and better working conditions. However, their strike was broken within a week.

Despite the important contributions of Chinese laborers to the railroads andother sectors of California’s economy, they had few recognized legal rights. In 1877, Pacific General Superintendent Charles Crocker testified before the Joint Special Committee to Investigate Chinese Immigration on the role of Chinese workers in the construction of the Central Pacific Railroad. At the time, there was great concern about the effect of cheap Chinese labor on the U.S. economy and culture, particularly in California. Crocker, who was instrumental in the decision to hire Chinese railroad workers, believed that Chinese labor was necessary to American society and benefited white laborers.

Anti-Chinese sentiment in California grew through the end of the nineteenth century, largely due to depressed wage levels. The Chinese Exclusion Act of 1882 attempted to exclude additional Chinese laborers from entering the U.S. in an attempt to reduce the supply of cheap labor, made it difficult to reenter the country, and excluded Chinese from U.S. citizenship. This made it difficult for Chinese American communities to balance gender ratios (Chinese men outnumbered Chinese women about 19 to 1 in California), and led many Chinese workers to return to their families in China. Meanwhile, immigrants of other races were not restricted from entry to the United States. 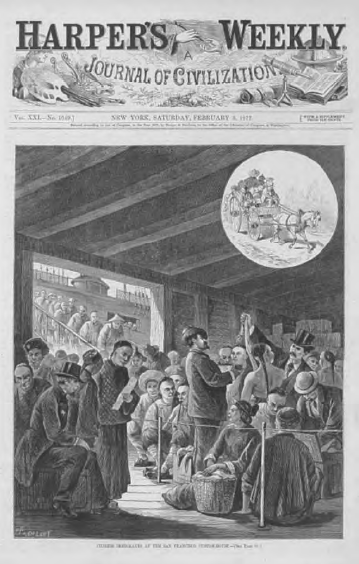 The Immigration Act of 1882 further restricted immigration, barring all immigration from China and restricting immigration from other Asian countries. Consequently, the Chinese American community in California consisted primarily of bachelors. After the San Francisco fire of 1906 destroyed a large number of government records in the city, many Chinese families claimed “paper sons”—immigrants from China whose ties to Chinese living in California could not be documented.

These legal exclusions contributed to the separate lives that Chinese Americans lived during the nineteenth and early twentieth centuries, centering around Chinatowns like that of San Francisco. Chinese nationals residing in the United States were permitted to become citizens in 1943 by the Magnuson Act, but large-scale Chinese immigration did not begin again until 1965.

Throughout the twentieth century, California received an influx of farmworkers, many migrant or undocumented, from Latin American nations. Agriculture, long established in California and already dependent on minorities for labor, turned to Mexican immigrants, particularly for its expanding citrus industry. The citrus industry, which had been established during the late nineteenth century, was able to expand into new markets because of the building of the transcontinental railroad. From about 1890 to 1940, citrus fruits, such as oranges and lemons, were California’s main agricultural products. Mexican immigrants, living in largely company-owned villages, formed the backbone of the citrus industry.

During the early twenty-first century, seasonal migrant farmworkers, many of whom were undocumented immigrants fromMexico and other Latin American countries and the Philippines, still formed a significant percentage of California’s agricultural worker pool. These migrant farmworkers were typically extremely poor and uneducated and had considerably shorter life expectancies than members of the general population.